The Portes du Soleil is a massive ski area. It has more natural terrain than most people would be able to ride in a lifetime. Having access to all that terrain is amazing, but what if you’re down with getting upside-down? The Portes du Soleil has a handful of parks that are considered World class. The beauty of having so many parks in one ski area is that they cater for all levels of rider; from complete novices to Europe’s freestyle elite. This year, Peak Leaders are running a course based in Morzine, the largest town in the Portes du Soleil, where our trainees will be making the most of these amazing parks. Here’s our guide to the best parks in the area:

Avoriaz has the biggest range of snow parks in France and will cater for all of your freestyle needs. To begin with, riders can take advantage of the Burton Kidsway Park which introduces you to low-lying, wide boxes and very small jumps. The Kidsway Park isn’t just for kids and is the perfect park for beginner freestylers to learn and progress safely and in an environment that isn’t intimidating.

Once you’ve learnt the basics you can head to the Chapelle Park which is the perfect arena to learn, progress and hone your skills. Features vary every year but normally the Chapelle Park has a choice of four jump lines and two jib lines. On the jib lines there are normally four features in a row; ranging from flat and wide boxes to kinked narrow rails. The four jump lines consist of two small/beginner jump lines, a medium/intermediate line and an advanced/large line. Similarly to the jib line; all lines normally have four features which range from a 1 meter table on the beginner line to a 12 meter table in the middle of the advanced jump line. 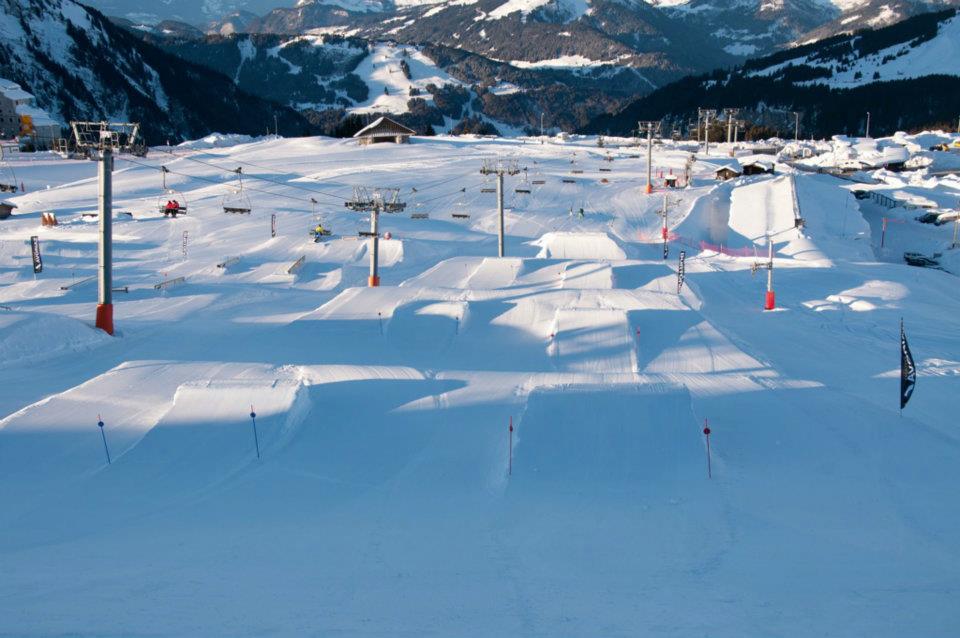 If riding halfpipe is your thing, then you’ll be pleased to know that Avoriaz has a well maintained Superpipe. Avoriaz’s Superpipe is one of the best in Europe, yet it isn’t too imposing, with walls under the 6m mark and a length of just over 120m. You’ll be please to hear that in the spring those icy walls see a fair bit of sun and the Superpipe is serviced by its own button lift so you can lap the pipe without ever unstrapping! 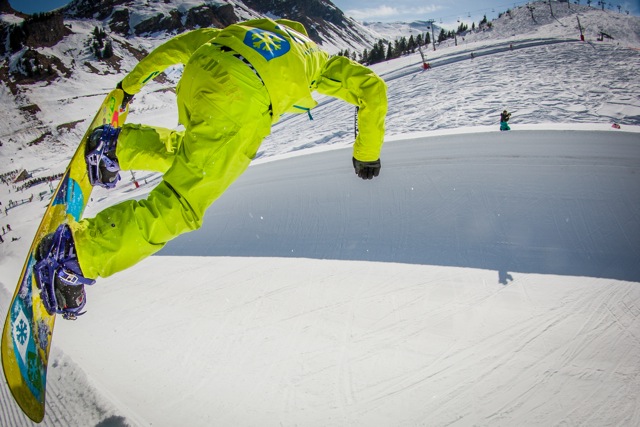 If all that wasn’t enough; Burton Snowboards built a Stash Park in Avoriaz. There are only 6 Stash Parks in the World and Avoriaz is one of two Stash Park’s in the Alps; the other being in Austria. So what is a Stash Park?  It’s a snowpark that runs through a wooded area of Avoriaz and uses natural materials to act as jib features. In this park; rails, wall rides and jibs are replaced by trees, logs, tree houses and carved wooden sculptures. It is a lot of fun and is a great place to head when there has been a recent snowfall or the light is really flat.

Occasionally we let Tom loose on an unsuspecting park!

Unlike Avoriaz; Les Crosets isn’t in France. Les Crosets, although still in the Portes du Soleil, is actually across the border in Switzerland. Although this doesn’t make a great deal of difference you can normally depend on the shapers staying that little bit later in the evening to shape the jumps so the park is normally in better condition…the Swiss are known for their efficiency! Les Crosets Park is the ideal park for intermediate to expert freestyle riders; if you are a novice there are better suited parks in the Portes du Soleil. 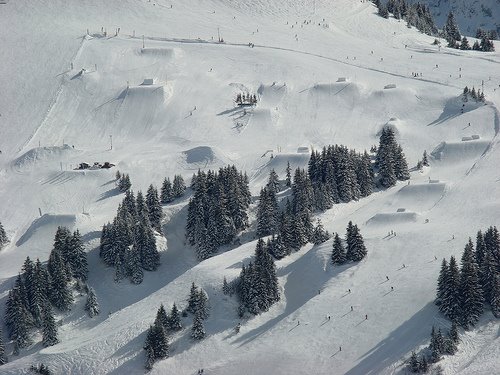 The Swiss know how to build a decent park!

Jumps in Les Crosets range from 7m to 20m+ tabletops and there is often a very tasty quarterpipe at the bottom of the big jump line. If you’re standing above the park looking down towards the lift stations the smaller jumps normally run down the left hand side and the larger jumps and jibs are either in the centre or in a line down the right hand side.

Chatel is where the ‘local’ skiers and snowboarders go to get away from the crowds. The Chatel Smooth Park is a really enjoyable park to ride with well-shaped jumps and a really chilled atmosphere. In 2012 the Smooth Park is where Nike decided to hold the French leg of the ‘Chosen Series’ which highlights that Chatel’s park shapers definitely know what they’re doing. 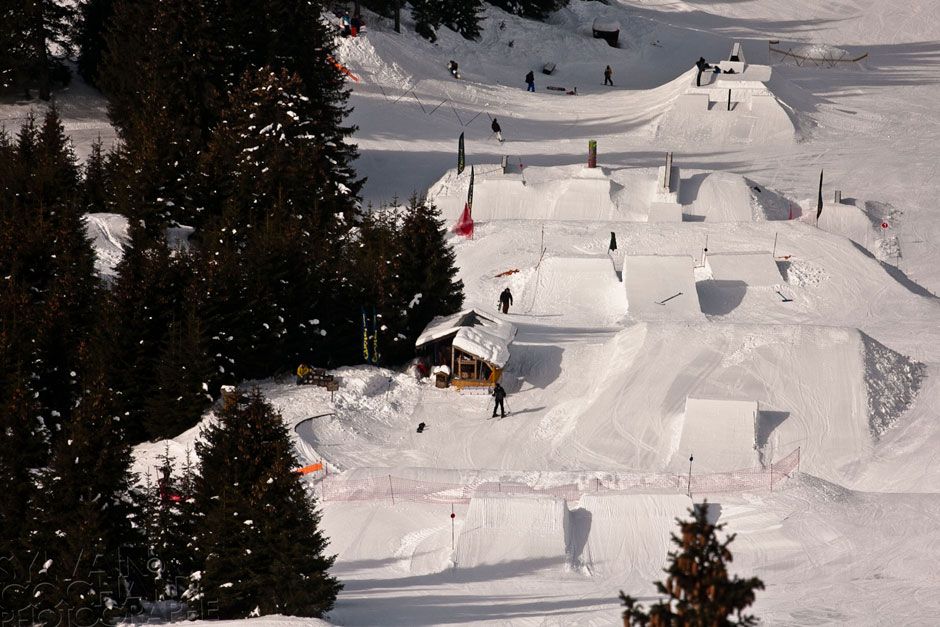 The Smooth Park, although smaller than the parks in Les Crosets and Avoriaz, tends to have a slightly more interesting park design with really fun jib combinations and jumps of all different sizes. Chatel also has a giant Air Bag which is normally used later in the season and inflated in the afternoons; this is a great way to learn new flips and spins. During the French or British holidays you may find the parks elsewhere in the Portes du Soleil a little busy, rest assured this little gem will be much quieter as it doesn’t get the publicity it deserves.

Les Gets is nice and close to Morzine so if you fancy a few cheeky laps in the park in the afternoon and can’t be bothered with the crowds up in Avoriaz it makes perfect sense to head there. The park at Les Gets is on the Mont Chery side of the mountain where it catches the sun and is serviced by a fairly quick chairlift.

In the park are a number of features; jumps, hips, rails and boxes. Unlike some of the other parks in the Portes du Soleil the features in the Les Gets park aren’t intimidating and suit everybody from beginners to more advanced skiers and snowboarders. Other than the normal park features Les Gets has a well-maintained boarder-cross and skier-cross course which weaves it’s way down the mountain through a number of banked turns, jumps and rhythm sections. It’s a lot of fun if you organise a race with your friends! 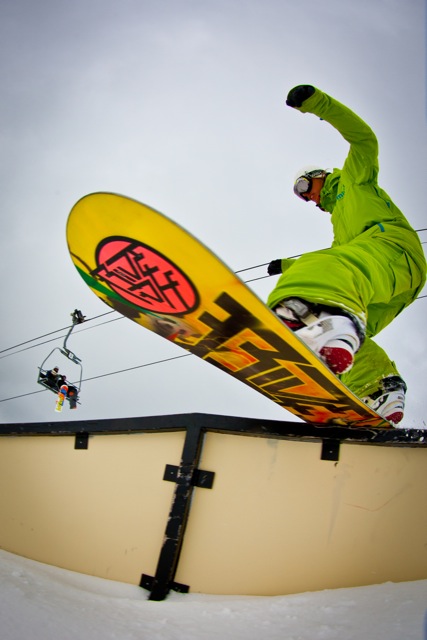