Last week down in Bariloche, Argentina, was an eventful one with everyone taking a step closer to becoming an instructor.  It came to that time of the course when the BASI trainers put all of the trainees through their paces on the Level 1 exam. Despite being apprehensive about a challenging and intense week the guys had a great time.

The BASI level 1 was a great week of training for everyone, they improved immensely on their technical skiing and teaching sessions, and even began to enjoy practising the central theme (the learning progressions for a beginner). 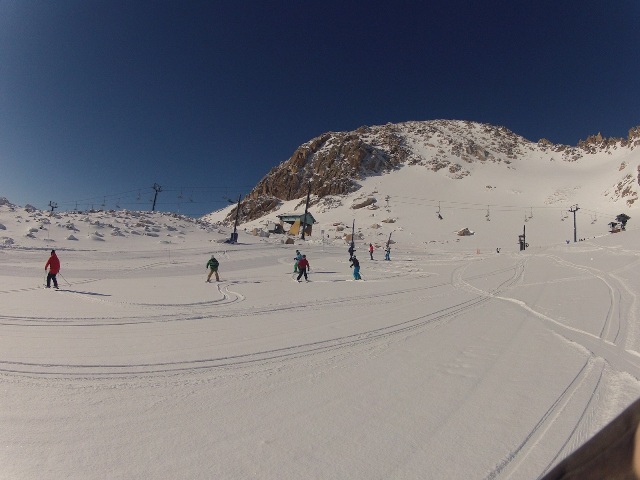 Do these count as fresh tracks?

At the end of the week we had a fantastic outcome of the Level 1 exam; with all the skiers passing and most of the snowboarders, so we celebrated in style with our weekly Asado (BBQ), which this week was a double celebration for Liam’s Birthday.

Apart from the level 1 exam many of the trainees have been busy with their Institute of Leadership and Management (ILM) projects this week; Dave’s project was to teach the skiers how to snowboard. The ‘biggest improver’ award has to go to Ben who went from constantly falling on his bum to hitting the kickers in the afternoon!

Liam received a special cake for his birthday after he conveniently let slip to Emma that the caterpillar cake from M&S was his favourite and he normally got it every year. We tried our best and gave Liam the closest thing we could find out here ….

Not the human centipede cake that Liam had hoped for!

All in all the weekend was pretty action-packed; especially up on the mountain where some of the guys definitely reveled in becoming Instructors!

Dave showing us why a decent helmet is so important these days.

Unfortunately Liam tried following Dave off the kicker and lost his ski mid air! Thankfully he bounced pretty well in the off piste!

Liv was particularly skillful on a chairlift by managing to slightly stick a Peak Leaders sticker on a pylon and then being dedicated enough to go back round and press it down so it stuck!

While the boys have been throwing themselves off kickers Liv has been keeping herself amused in other ways.

With spring rapidly approaching down here the occasional dip in the lake at the hotel has become a daily leap of faith for everyone including the BASI trainers!

Struggling to smile for the camera!

Next week everyone is lucky enough to have another week of training with the amazing BASI trainers before they start the BASI Level 2 Instructor Course.