What an amazing course it’s been; our riding has been pushed and progressed beyond what any of the guys had even dreamt and now they can pass their new skills and knowledge on to others. Congratulations to everyone for passing all of the different components of the IDP level 1 and 2 and for generally being an awesome crew of people to hang-out with for 5 weeks.

The last week has been all about teaching and progressing jumps and drops. Whistler has a sweet set-up of drops and jumps to teach on, allowing our instructors to focus on getting the trainees technique ‘just right’ on progressively bigger and technically tougher features. Everyone was taken back to basics; sometimes getting the basics right isn’t as easy as you imagine! As IDP certified coaches the trainees need to be able to demo a jump with good technique; not just making sure they’re airborne. Muscle memory, built up over time, can make this process very difficult; but with plenty of repetition the demos came along nicely!

Other than jumps and drops we worked on some high speed and high-end cornering earlier in the week. Yeah! For starters; ensuring a strong body position and making movements for generating, rather than losing, traction and getting a strong carve is a must. Once positioning and moving has been corrected next comes; drifting, bump turns, cuttys, and all that other good stuff! In general the guys found that they were doing a lot of these moves instinctively but not understanding what made them happen. As we all know ‘knowledge is power’. With regards to drifting; everyone felt a major shift in comfort and confidence when drifting turns. Apparently, deliberately creating a drift doesn’t have to go ‘hand in hand’ with the sinking feeling that things are a little out of control. Once the guys had got these turns down the excitement and enjoyment in the group was palpable.

Mike forgot one important tool for this demonstration!

We’ve spent the last couple of days shredding and going on adventures. We even took a trip out to Khyber Pass, an epic run from the top of the Peak Chair, then out-of-bounds and into some amazing back country terrain. Mike knows this trail well (he helped map it out back in the day!), and guided us safely, as usual, through some very cool terrain. Dom, our resident photographer, came along to take some photos of the guys sessioning a load of interesting features along the way. Everybody agreed this was one of the most intense and enjoyable rides they had ever taken!

There’s no obstacle or feature too difficult for this crew!

Something we’ve been thinking about over these last few days of the course has been hitting all the trails that the guys ride back home. With such progression in their riding and after getting comfortable on the amazing terrain that Whistler has to offer, their home trails are not going to feel as challenging. How you view and ride terrain is all relative. The crew can already see themselves back on those same turns, hits, drops and tech sections and imagine tearing those features to pieces! This course has given them the confidence to hit things faster, stronger and more balanced. They’ve also been thinking about what knowledge they will pass on to their mates. Whether their peers are less or more experienced, the trainees are all looking forward to sharing ‘some’ tips with their hometown crew…….obviously not all their tips! 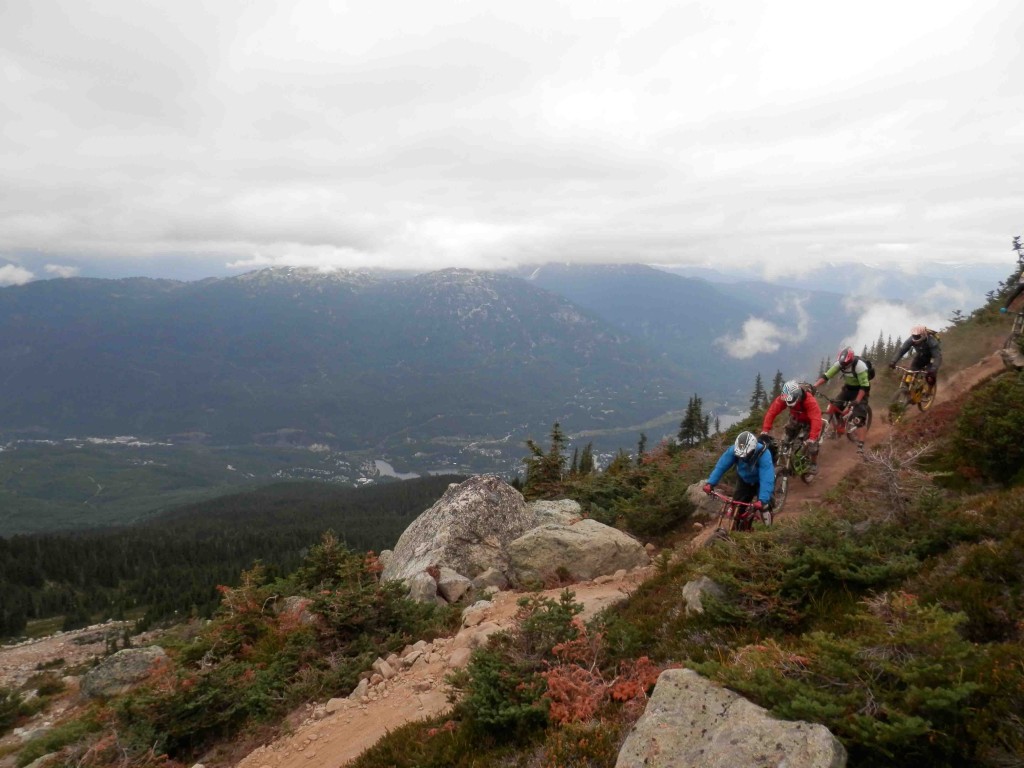 Can’t imagine the trails back home will have views like this!

Thanks to all the guys on the course, it’s been an absolute pleasure. A lot of this years crew are planning on returning to Whistler next summer to work…..can’t wait to catch up with them for a beer and a shred!

Dahj and his mate on top of the World!