Last week Saas Fee was a hub of activity for the Peak Leaders trainee ski instructors. With their BASI level 1 finished the guys and girls have moved on to the BASI level 2 curriculum. As part of qualifying as BASI ski instructors the trainees also have to complete a two-day First Aid course, which started on Sunday. Delivering the First Aid course was Emma Cairns who is also a highly qualified BASI instructor and has recently returned from running the Peak Leaders course in Argentina. Emma will also be taking over from Julian with training our trainees on the mountain.

As the snow conditions have been so good over the past week Julian and Loz have focused on improving the trainees powder skiing technique and their skiing of variable conditions. As everybody appears to have nailed the central theme this past week has been aimed at improving the trainees technical skiing and their understanding of how to explain and teach more difficult skiing technique. One exercise, which seemed to be a bit of a struggle in the current conditions, was one-footed skiing, which claimed a few minor casualties. A special mention must go to Sam who’s really upped his game over the past week and has put his heart and soul into practicing specific drills.

Step back and watch the carnage unfold!

Elsewhere on the mountain the snowpark has been “going off” with a number of freestyle camps being run. It isn’t uncommon to see the odd 1080 or doublecork being thrown by the skiers and snowboarders hitting the jumps.

Away from the hill those trainees that are taking the ILM level 4 award have been busy organising their leadership activities. Paul is organising an orientation day where the trainees have to split in to groups and navigate their way around the Saas Fee area, finding numerous clues along the way. At the end of the orientation a BBQ and a few beers will be waiting for the trainees.

Rest assured the guys have had loads of time to do their own thing and let their hair down. This week they’ve played Touch-Rugby and British Bulldogs on the snow covered football pitch. Unfortunately the game of ‘touch’ ended in tears as James fell awkwardly and dislocated his shoulder. Fingers crossed James improves nice and quickly so that he can get back on those skis.

Saas Fee’s nightlife seems to be getting much busier with lots of skiers and snowboarders making their way up to Saas Fee on the weekends to make the most of the pre-season powder. It’ll be no surprise to hear that Tony and the trainees are earning a name for themselves as the most interestingly dressed group in town. Sam can often be spotted in town dressed as a Banana, which really benefited him when walked into a local bar for a beer and left with 1st place prize for their annual fancy dress comp. His prize was a brand-new snowboard which isn’t much use to him on a BASI ski instructor course. 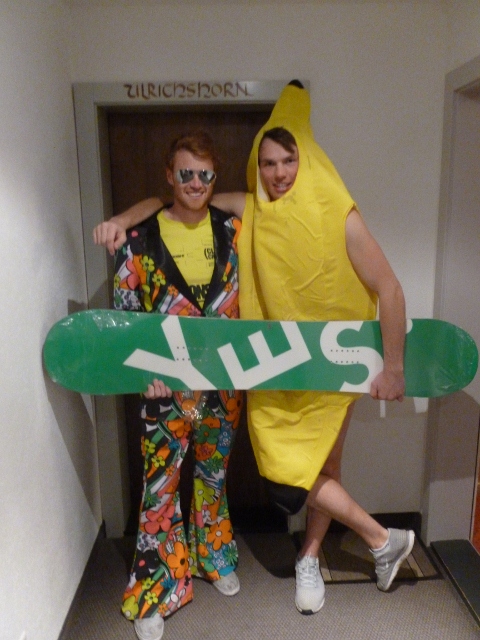 The boys didn’t have much luck with the ladies but did get to take this beauty home.