Many of you reading this interview will know Si or at the very least know of him. He’s a stalwart of the British snowboard scene, a presence at many UK snowboard events and somebody that seems to be friends with absolutely everybody. If you love snowboarding then the likelihood is you’ll get on with Si like a house on fire. Nevertheless, aside from being a nice chap Si is a very enterprising character and other than being a fully qualified jeweller he’s also a musician, an entrepreneur, and wait for it………a fully qualified snowboard instructor and coach. Si attended a Peak Leaders course many years ago in Canada and his love the sport has grown exponentially since then.

What Si’s journey over the past few years shows is that not everybody taking a snowboard instructor course will follow instructing as a career. Life has many strange twists and turns but if you’re passionate about snowboarding you’ll always find your own ways in being involved in it. Doing an instructor course with Peak Leaders might just be one way of exploring that passion and it’ll definitely make you a stronger snowboarder.

Check out the interview! 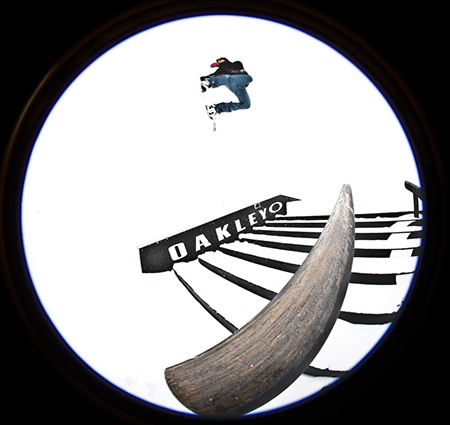 Si paying homage to ‘The Greats’ with a stylish method over a stair set (Image courtesy of Sam Mellish @ www.sammellishphotography.co.uk)

What are you up to at the minute Si? Designing jewellery, drinking too much Guiness and listening to lots of Metal?

HEY! Yeah I just got back from a tour with a couple of bands, I was filming the trip, so you could definitely say I’ve been drinking Guinness and listening to Metal! I’ve also just finished my diploma in Gemstones and Diamonds, which is great, and I’ve been making a few pieces of jewellery for the New Year.

Do you have any plans for the coming winter?

Yeh I’ve always got plans for winter! I’m off to Morzine for New Year with friends then we have a Route One Team trip to Helsinki planned and I am off to Tahoe for 6 weeks come the end of February. Can’t wait!

So how long ago and where did you do your Peak Leaders course?

I did my course In Nakiska, Alberta. I was there about 7 or 8years ago now! WOAH!  Maybe even longer!

Yeah I went back the following winter. I taught during the week and coached some local kids freestyle at weekends! It was dope! Crazy little Canadian kids! They were awesome! The park there was great and always quiet, we practically had the halfpipe to ourselves!

Do you think your life would have turned-out differently if you hadn’t taken the course?

I think I would have found snowboarding somehow, but the Peak Leaders course just got me to a good start when I was young! I had no interest in going to Uni! I learnt a lot about snowboarding and didn’t end-up with a huge student loan at the end of it! 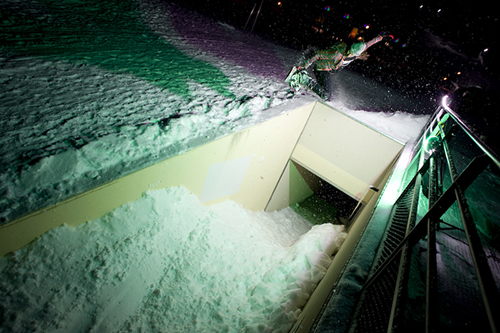 Si about to land on an unsuspecting concrete ledge (Photo courtesy of Sam Mellish @www.sammellishphotography.co.uk)

What have you been up to since you qualified as an instructor? Snowboarder, musician, artist, jeweller…….

Since I qualified I have just been snowboarding and getting involved in the UK scene. Learning about the family jewellery business (Belson Bespoke Jewellery) and playing a lot of guitar! I’ve been working at the odd festival in the summer and a bunch of us did some Extra work for ‘Pirates of the Caribbean’. Fortunately it was a group of us from the UK shred scene and we got to wonder around the set in costume for 2 weeks, it was well funny! (In fairness Si looks a bit like a Pirate!)

Do you know of any other well-known UK riders that are qualified instructors or coaches? (we can name a few: Lewis Sonvico, Jenny Jones, Wakeham, Mikee Cee, Sam Turnbull)

I rode with Lewis last winter; we did an article for the Latest copy of the Reason snowboard magazine (great magazine, check it out). I know Jenny, Dan and all those guys! Mike Cee is a Hemel boy and we ride there most Fridays! Yeaahh!!

What does snowboarding mean to you at the moment?

It’s just RAD! And it always will be! It keeps me smiling!

You’ve been involved in the British snowboard scene for a few years now. How did it all come about?

I guess that would have come from my time spent in Tignes where I met Schoph. We went riding heaps and became great friends. I ended up riding a lot with Will Hughes, Ian Thrashmore and Schoph. (Schoph and Thr Ashmore are the founders of Dalikfodda clothing and Will is a well-known former pro snowboarder)

Also, Andy Sherman Mills (one of Si’s friends from his time spent riding Calshot dryslope) got me involved with some work on the UK snow tour and that was an awesome way of meeting friends and seeing the progression of UK shredding. 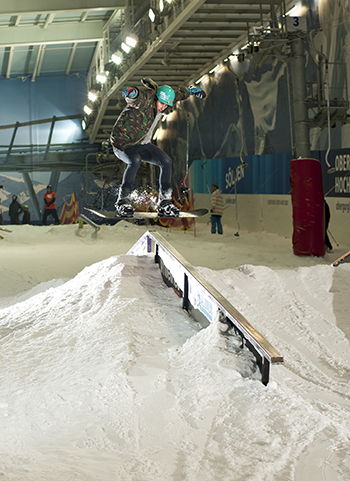 Si loves Metal. When he’s not working with it, or listening to it, he’s grinding it.

Everybody knows you love Metal music; but why do you like riding rails so much?

I think riding indoor slopes got me into rails and I prefer the creativity of filming lines through the park and finding different transitions to jump into and stuff! I love hips and jumps; you can’t beat a solid method grab! But yeah rails are dope!

Are there any shops or brands out there that are hooking you up at the moment?

I have a shop sponsor with Route One and have a few hook ups with Capita and Dragon. Fortunately I get cheap boards and bindings from Capita. I’ve been riding a lot in jeans and hoods recently, so I don’t ride in any actual snowboard ‘gear’……..I better sort some shred pants out for new year.

You can check-out Si riding the Mayrhofen Park with James Hull and Ollie Plumley in this video, Si starts riding about 40 seconds in.

Few laps in Mayrhofen from Simon Belson on Vimeo.

Big thanks to Si and Sam Mellish Photography.

It’s days like this that keep us wishing for summer to be over!