Just in case you didn’t already know….”it’s snowing in Verbier”! Magnus and his crew of trainees have been busy digging a network tunnels underneath the snow and have even found the time to plough a few turns on their skis and boards. In fact the snow is so good that Tim, one of our snowboard trainees out in Verbier, has kindly written a nice review of the first few days……just to rub it in! Enjoy!

We arrived in Verbier early Saturday afternoon to open skies and a clear view of the surrounding Mountains. However that quickly changed, as the clouds rolled in and the snow began falling. On arrival we met Magnus; ‘El Capitán’ and protector of the precious Chalet Turbon, where we’ll call our home for the next 10 weeks. Magnus is also a level 2 BASI snowboard instructor and has spent two seasons in Verbier so he’s a great source of knowledge.

The view from Chalet Turbon!

Our first night out in Verbier allowed us to become acquainted with the Loft and Pub Mont Fort; two of the local establishments we will come to know very well over the next 10 weeks. While out and about we met many of the instructors that are here for the season, none of their names I personally remembered. Nevertheless all of the group got to know each other a bit better and enjoyed an all round respectable amount of pints. Everybody enjoyed telling the bar tenders that we were Peak Leaders trainees to receive seasonaire drinks prices.. some of us maybe a little too much! Thankfully we all made it home alive…

By Monday we were all desperately keen to get on the snow- the snowfall had been relentless since Saturday. Only two runs were open but that was enough (just) for our first lesson. The snowboarders are being taught by Gibbo, a highly regarded instructor working with ES and Peak Leaders here in Verbier. Gibbo, being a top bloke, promised not to look at our very first run while we warmed up and instead used the opportunity to demonstrate some pretty gnarly riding. For the remainder of the session he coached us on snowboarding stance and turning techniques, these are all integral to teaching beginners. Even those of us who have been riding for a long time found small things to change to make our riding technique more efficient. After the lesson we hooked up with the skiers and all enjoyed a good ride around together for the afternoon. 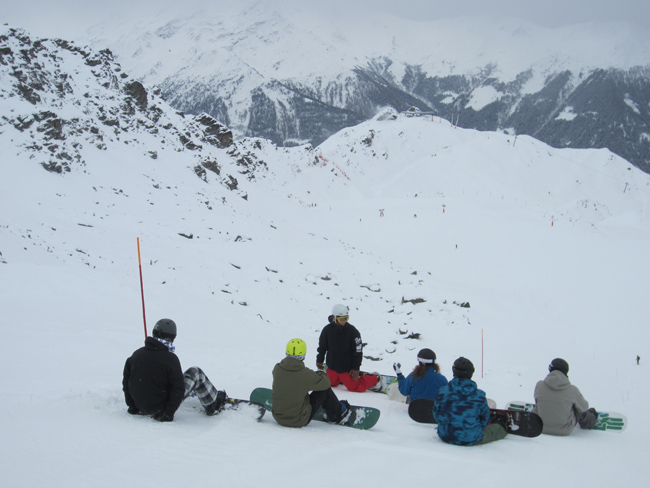 With no respite in the weather the snow has just kept falling. It was with mixed emotions that we received the news on Tuesday that the resort would be closed because too much snow had fallen overnight. The result was a truly epic Wednesday. Only one run was open but from that run we could access a magnitude of powder snow, bumps and tree runs. We spend the day in tonnes of powder, at times chest-deep! We all finished the day with an exhausted back leg after riding so much epic powder. It was probably a little too early in the season for us to tackle such demanding conditions but we’re learning quickly, lapping up the powder, and loving every minute that we were not stationary. Gibbo meanwhile couldn’t wipe the smile off his face as he slashed through the powder, he managed to turn any bump into a feature and kept us digging for more as we rode the deep deep pow

And it still hasn’t stopped snowing!

Frankie may have strawberry blonde hair…..but that doesn’t mean he can’t wheelie a Snowboard.