Peak Leaders’ course in Morzine has only been running for a week but the town, the hotel and the skiing are already a massive hit with all of our trainees. Morzine is a lively town perched in the middle of the Portes Du Soleil and has a large population of British seasonaires and ex-pats. Although Morzine’s bars, clubs and restaurants are always busy it doesn’t have the same hedonistic vibe as some other well-known resorts. That’s mainly because people live and work in Morzine all year round; it’s one of a select few ski resorts that is big enough and close-enough to a major city for it to sustain a population of ‘ordinary’ people. That isn’t to say that Morzine doesn’t know how to party; Café Chaud on Sunday night and practically every Wednesday evening are awash with Chalet workers, transport drivers, instructors, bar workers and shop attendants. 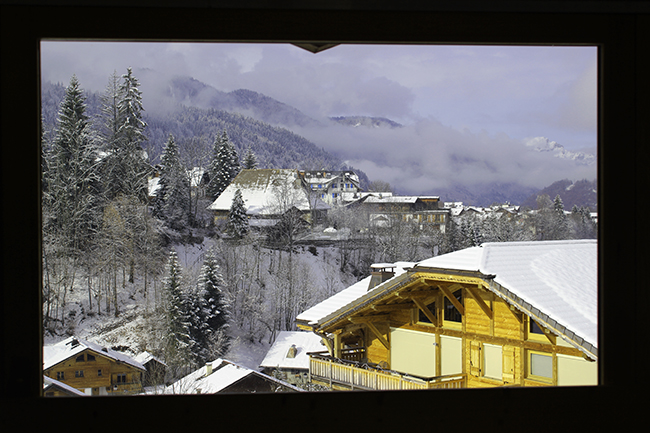 Views from hotel bars don’t get any better than this!

So I guess you’re wondering what our trainees have been up to this past week. Since they arrived they’ve endured a fairly hectic schedule of training, studying and partying. On Sunday, after a walk around the town and a short ski, the trainees were introduced to Jaz Lamb from BASS, our ski course director, and Tammy Esten from Mint Snowboard School, our snowboard course director. Both Jaz and Tammy are highly experienced instructors and coaches and have been living in Morzine for many years, if anybody knows how to train our guys for a BASI level1 and 2 exam it’s Jaz and Tammy!

Everybody enjoying being back on the white stuff!

Training started on Monday for both groups; the skiers started nice and early and were thrown straight into BASI-specific training. Stance, balance and posture were the key areas of focus for the first three days of training. The snowboarders on the other hand were given training that allowed them to regain confidence on their boards before pulling-apart their technique. Fortunately Wednesday started with a large dump of snow so the snowboarders were treated to a little bit of freeriding with Swiss instructor Mikael, who by all accounts feels completely at home in terrain that would reduce the average snowboarder to tears. Although the skiers have been focusing on piste performance and BASI training their trainer James still managed to do some powder skiing. Rumours of Lydia and Lucy managing to get well and truly stuck circled later that day. All of the trainees have made massive improvements to their skiing and boarding over the past week and it’s great to see them all skiing and riding with bucket loads of confidence and embracing feedback from their trainers. 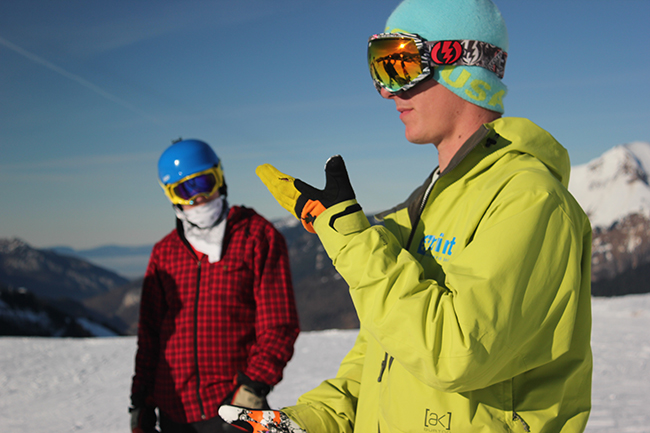 Quick-Draw-Joe on his way to gunfight at the O.K. Corral

Other than skiing and snowboarding there has been loads happening in resort. Amongst all that training we’ve had a couple of biggish nights out on the town. Don’t worry the trainees have all been warned about the local ale ‘Mutzig Old Lager’ which has earned a rather ominous reputation around town due to being close to 9% in strength. Café Chaud, the Tremplin and Bar Robinson are the most popular venues in town and have kept the guys and girls entertained until the early hours, along with the hotel hot tub…….Cookie! On the days that the trainees haven’t hit the town we’ve been to watch the local Ice Hockey Team play, the Morzine/Avoriaz Penguins, the skiers have completed their First Aid training. and we’ve also held a Pub Quiz…….which will be happening every Thursday. In last weeks quiz there were some fairly ridiculous answers given by the trainees, the best being:

Think they may have been a few thousand years out with that answer. This weeks pub quiz is set to be a tightly contested battle…..can Stevie, Joe and Milli retain their crown? We shall see! Next week is set to be an awesome week with our snowboarders getting the chance to ride with one of Burton Snowboards best female riders Orla Doolin and both the skiers and snowboarders stepping up their training in preparation for the BASI level 1.

The Fast and furious