The last couple of weeks have been full-on for our trainees in Morzine. Not only has the training been getting more and more intense but this week the trainees completed their BASI level 1 exam!

Last week started with both the skiers and snowboarders changing their trainers; the skiers started training with John Dunn from BASS and the snowboarders began training with Ben Kinnear from Mint. It just so happens that Ben is also the BASI Snowboard Director and a coach for the Great Britain Junior Snowboard Team. With training from some of the best trainers in the business you can imagine how much the trainees skiing and snowboarding improved.

Ben definitely has some moves!

On Monday the snowboarders got the opportunity to ride with Burton UK pro snowboarder Orla Doolin. After an awesome morning riding the boxes and jumps in the Chapelle snowpark and a quick lunch in Changabangs we headed to the Burton Stash Park where Milli and the lads had a go at riding wall rides, drops and wooden boxes. Orla was a great influence on the guys and inspired them to try new tricks and obstacles that they had previously never thought possible. All of the trainees progressed a lot; Joe, Stevie, Milli and Cookie all learnt bs boardslides in the Chapelle park; and Archie and Jake learn fs boardslides and absolutely obliterated the Stash park! Orla has now left for Bear Mountain in California to film and train but she definitely left a lasting impression on the trainees.

The following week was jam-packed with training for both the skiers and boarders. While the skiers focused heavily on short turns, long turns and parallel turns the snowboarders focused on riding with the correct posture and pedaling, which is using your feet to initiate and exit turns. Obviously it wasn’t all hard work and the guys did get the chance to enjoy some seriously deep fluffy powder and as with the first week we had the weekly pub quiz. During the quiz Stevie proved that he wasn’t just a hat rack and Lydia, Tia and Archie ensured that they’ve been blacklisted for future quizzes! After a busy week of training in some Baltic conditions the trainees had a chance to chill on the weekend but couldn’t resist hitting the town on Friday night, once again Cookie was the catalyst! Despite a successful career in the city as an IT guru for Barclays Cookie has definitely embraced life in the Mountains and seldom struggles to hit the bright lights of Morzine.

At the beginning of the BASI week it was Lydia’s birthday and Ken made her a big old chocolate cake!

After a relaxing weekend in which John and Sam, our new additions to the team, finally arrived after some pretty epic journeys, it was time for BASI level 1. For their BASI level 1 the skiers had local legend and BASI examiner Andy Jerram and the snowboarders had Renelle Mortimer who is the only female BASI snowboard trainer. All of the trainees worked insanely hard for the exam with seven hour days on the hill working on their skiing/riding technique, followed by up to two hours of lectures in the evening. Needless to say after such an intense week they were all absolutely shattered…….this didn’t stop them getting on the Mutzig on Friday afternoon in celebration of such a great pass rate. All of the skiers passed and only one of the snowboarders missed the mark narrowly. She’ll definitely smash the one day technical examination when she takes it in a couple of weeks!

Only 1/10 of a Mutzig down and already grinning!

The next couple of weeks are going to be a little more relaxed and the guys and girls will have more time to do activities outside of just skiing and boarding. This coming week we have the course Pool competition, which Joe is clear favourite to win, a trip to the cinema and the snowboarders have their Avalanche safety course………as well as training and shadowing lessons with Mint and BASS. 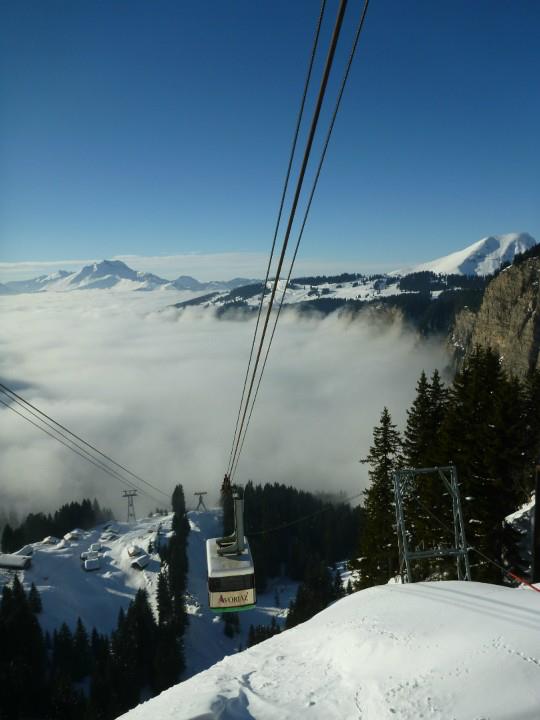 Jake killing it in the Stash!