When Peak Leaders and Burton Snowboards’ Orla Doolin got together in the Alps for two days of park shredding, it made for an unforgettable experience with a huge amount of progression and stoke.

We’ve all had those days of riding with somebody who’s a little bit special on a snowboard, leaving us totally inspired, with an invigorated hunger to try new tricks and push our riding.

Burton UK rail-riding sensation Orla Doolin provided that epic day out for the group on the Peak Leaders Morzine snowboard course. With some silky style and a bag of jib tricks that would but many male riders to shame; Orla was the perfect person to introduce the trainees to jibbing and rails. Importantly Orla has a great understanding of the movements and physics behind tricks and understands when it is safe to push her and other peoples limits. 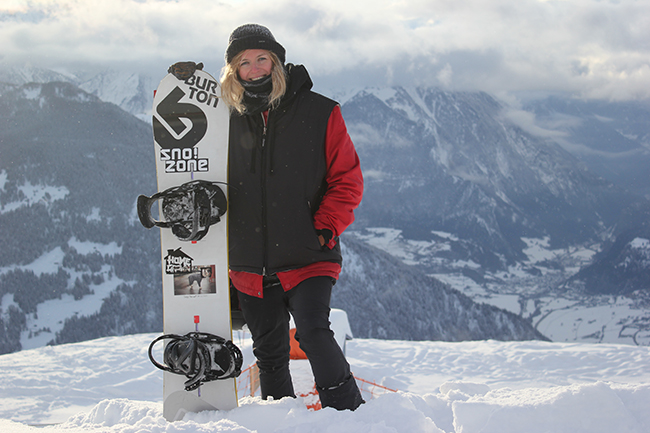 Morzine is a short lift ride from the snowboarding Mecca of Avoriaz, which is the perfect destination for a snowboard course. Avoriaz has some unbelievable terrain, four different parks, a Superpipe and as a result many people would consider Avoriaz as the snowboard capital of the French Alps.

The first few hours of riding were spent in Avoriaz’s Chapelle park where Orla helped the guys to perfect their boardslides on the boxes. Orla’s positive attitude rubbed off on the trainees and as a result their confidence grew throughout the morning. Most of the guys hadn’t really hit many boxes in the past but by the end of the morning were all boardsliding and some were nailing the Frontside boardslide.

Next stop, the Stash in Avoriaz. If you’ve ever been to the Stash you’ll know that it’s a big step up from the boxes in the Chapelle park. It was amazing to see the guys respond to Orla’s irrepressible enthusiasm and once again step up their riding and start hitting 12ft wall rides, picnic tables to big drops and wooden quarterpipes. All of the guys really upped their game throughout the day, which was undoubtedly due to having Orla there; she was a constant source of knowledge, inspiration and amusement.

Jake had never been in the Stash Park or ridden a wall ride!

We made the 2 hour drive across the Portes Du Soleil and into Switzerland to ride with our snowboarders in Verbier. It was the first time that Orla had been to Verbier, which is more well-known for its amazing freeriding. After a quick coffee and “the best Almond Croissant in the World” we hooked up with the Verbier crew to head over to Nendaz where Rome had built a smaller version of the Stash called ‘The Woodpark’. The guys got immediately to work sessioning a small wallride with Orla getting to grips with some one footed fastplants that she’s seen Gibbo, our snowboard trainer, nailing. Gibbo is a really strong rider and it was awesome to see him stepping up his game and giving Orla and the trainees some inspiration…Miller flipping the wallride had to be the standout trick of the day.

Gibbo doing what Gibbo does best

It was the legendary Pub Mont Fort which was the last stop of the day, for a beer and chat about the days riding. Orla really gelled with the group and there’s no doubt that without her influence we wouldn’t have seen the level of progression that happened that day.

Dan on the cannon rail to wall ride transfer……..yeah Dan!

It’s definitely been an unforgettable experience for the trainees in both resorts. Not only have they improved their riding but they’ve also learnt a little about the life of a pro rider and seen that we all snowboard for the same reasons. Seeing as Burton were really keen for our trainees to shred with one of the best girl rail riders in the business; do you think next year they’ll let us borrow Shaun White and Danny Davis for a day of pipe riding next year?!!

Orla is very safety conscious and always uses her seatbelt!

We’ll be dropping a fun video edit within the next couple of days so stay tuned!

Orla chilling with some of the Morzine crew