We’ve just had our fifth week in Morzine and things are yet to slow down. The course has been running at 1000mph and the trainees have been doing an amazing job of taking both their training and shadowing very seriously. Although they ‘smashed’ their BASI level 1 exam the step up from level 1 to level 2 is considerable so there hasn’t been time for any slacking!

Over the past week we’ve had some serious snowfall in the Portes Du Soleil; more than the vast majority of Morzine’s longstanding seasonaires have ever seen! It seems that every time we think the snow has passed and we’re in for some high pressure weather conditions a new weather system rolls in and drops another foot of snow overnight.  This has made for some amazing skiing/boarding conditions and has meant that Stevie’s poor car is carrying a sizeable chunk of snow on its roof. The Portes Du Soleil has some unbelievable terrain

Lindarets, one of the many valleys in the Portes Du Soleil

Week 5 carried a very similar structure to the two previous weeks: 2 hours of shadowing in the morning, then 2 hours of structured practice followed by 2 or 3 hours of training with an instructor trainer in the afternoons. During week 5 the snowboarders trainined with Pinchy Dave from Mint, who is also an off-piste guru, and the skiers trained with James Crompton who is a recently qualified BASI trainer and examiner. As well as the bottomless powder the main highlight this week for the snowboarders was being taught to front flip and having a kicker session with trainer Dave in the backcountry. Both Stevie and Archie managed frontslips, and Joe (who won’t mind me saying is a little ‘longer in the tooth’) was very close to landing one. During the kicker session all of the trainees got airborne with Milli, Cookie and Jake getting some tasty grabs and Sam pushing her limits and getting out of comfort zone. Check-out this video of Stevie throwing down a tasty fronflip:

As usual Wednesday night was another big one for the trainees. Wednesday is the most popular night in town as it’s the night that all of the regular seasonaires are given the day off work. As a result Morzine’s most popular Apres Ski venue ‘The Tremplin’ is jam-packed by 4pm in the afternoon and by 6pm they’re all raving pretty hard out on the Tremplin’s makeshift decking. Over the past few weeks the Tremplin has become more and more popular with the trainees who can often be seen at the front of the crowd throwing shapes on the dance floor or in Cookie’s case trying his hardest to drop some moves on the poor unsuspecting Chalet girls. 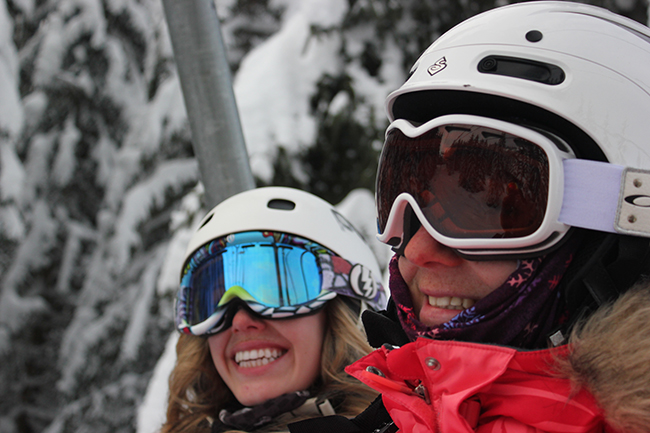 Milli and Lydia ‘chilling’ on the lift

By the time the weekend came around all of the trainees were fairly exhausted so most of them took Saturday off skiing. It’s important to have at least one day off the hill every week to allow the body to recover. Saturday has become a good day for doing chores around town, spending the morning in Dotties Café with a Bacon Sandwich and if you’re Jake; having 5 slices of cake and 30 cups of Tea.

On Sunday although the majority of trainees decided to hang around Morzine, and a couple of the guys went on a ‘snowboarding date’, a few of us made the trip across to Chatel for lunch. The snow and weather conditions were fantastic and although it was really cold and Stevie had his usual equipment issues we made it across to Chatel in good time. After a lengthy lunch in the sun and a wrong turn on the bus we decided to head back to Morzine and try to snake our way through the amassing half-term lift queues. 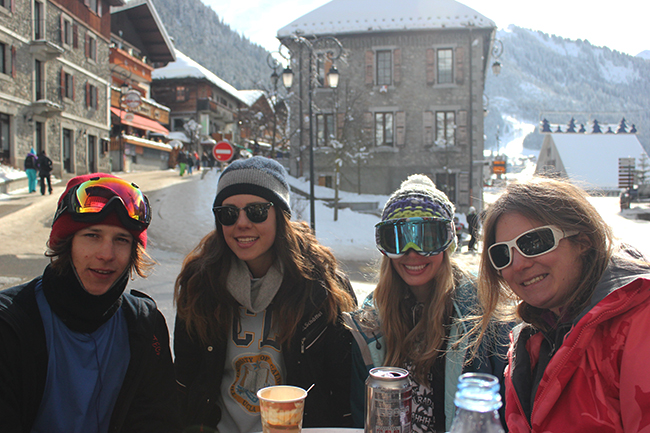 The crew warming up in the Chatel sunshine

That evening, after a Sunday Roast, we held the weekly pub quiz. After bragging about consistently topping the class Gabby and Milli were put together but with a score of 17.5 out of 50 they finished last…….which just goes to show they’ve been consistently good at choosing the right partner rather than being knowledgable! This weeks winners were Johnny and Lydia, who were miles ahead of the competition!

With loads more snow falling on Sunday night this week coming is set to be another great week.