Last week in Morzine was another busy one for the trainees. With epic amounts of fresh snowfall across the Portes du Soleil it wasn’t particularly difficult to motivate the trainees to get out of bed in the mornings!

Fortunately with such great snow conditions and a really intense training and shadowing schedule, at least two hours of shadowing each day combined with up to three hours of training per day, all of the skiers and snowboarders in the group have made big improvements to their skiing and snowboarding.

Lucy carving Les Gets pistes up into little pieces

Similarly to the fifth week the skiers continued to train with James Crompton who is a BASI examiner and has many years of training instructors in Australia, France and Italy. James’s training techniques seem to be working wonders on the skiers technique so hopefully they’ll be more than ready for the level 2 exam in a couple of weeks.

Ski poles definitely have their uses…

For week 6 the snowboarders switched trainers to BASI’s newest and youngest examiner, Lewis Sonvico. Lewis has an amazing reputation as a trainer and freestyle coach, and has spent many seasons teaching in Crozets and Morzine…….he’s also a bit of a local hero in the Chatel and Crozet parks! 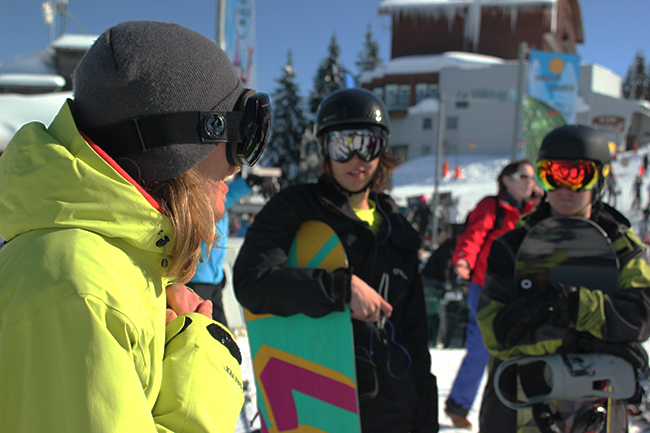 Lewis and the crew having a chat

Both trainers have been focusing their trainees on higher-end technique. The snowboarders have been working on riding variable terrain and off-piste as well as switch riding (riding with the other foot forward) and the skiers have been working on skiing variable terrain as well as perfecting their carving and short turns. A special mention must go out Sam in the snowboard group and Lucy in the ski group who have been super motivated this past week and have made the biggest improvements out of everyone.

Towards the end of the week we had a brief visit from Mhairi in the office. Mhairi hung out with the guys for a couple of days, had a few drinks in Cafe Chaud on Sunday night and even had a go at snowboarding. It was nice to see she’s still go it!

As well as all of the activity up on the hill the trainees have had a couple of big nights out on the town as well as the weekly Pub Quiz, which Archie and Jake really struggled with this week! It seems the best nights in Morzine are Cafe Chaud on Sunday night, the Tremplin on Wednesday night where we’ve seen the likes of Annie Mac spin records (select MP3’s), and Chez Roger has become a crowd favourite for a quiet drink. The next few weeks are really important so mid-week partying is definitely going to have to be put on hold until the end of the level 2. Only time will tell how outrageous Cookie will get on the last evening……..I’m worried!