Week 8 of the course started with a freestyle / freeski training with Stefan from the Sunshine Village Ski School. The crew learnt how to ski in the Park safely and how to teach and ski boxes, rails and kickers.

Stefan showing the guys how to teach riding a box

There were some very interesting styles of box skiing with people finding out the hard way that you can’t use ski edges for balance on a box or rail. Susie inspected the snow around the box and Rob had matching bruises on his posterior!

Susie inspecting the box for any dents

‘Geordie’ Alex was the standout skier in the park thanks to his skills on the boxes, 360’s off the kickers and attempted 540’s!

With the fresh snow from the previous night Stefan then took the group to some great natural hits and drops, the trainees loved the freeski terrain off the Standish lift.

Alex enjoying what Banff is World renowned for!

Training this week was all about personal ski improvement with the group analysing each other’s skiing and coming up with drills to improve their teaching skills for the Level 2 exam. As part of the training Kenji took the group into the GS course – “if you don’t put the pressure on the outside ski, you will not get through the gates!”

Later in the week there were reports of a big snow storm heading towards Banff and we woke up to find a powder alert of 40cm at Sunshine Village. To say the skiing and riding in the trees on Goats Eye Mountain was anything less than epic would be an understatement!

With all the Peak Leaders Banff Course trainees getting a BIG3 pass the crew headed to Norquay for some night skiing and a few drinks in the Lone Pine Bar. On a warm night (for Alberta) the crew had fantastic nighttime views of Banff. 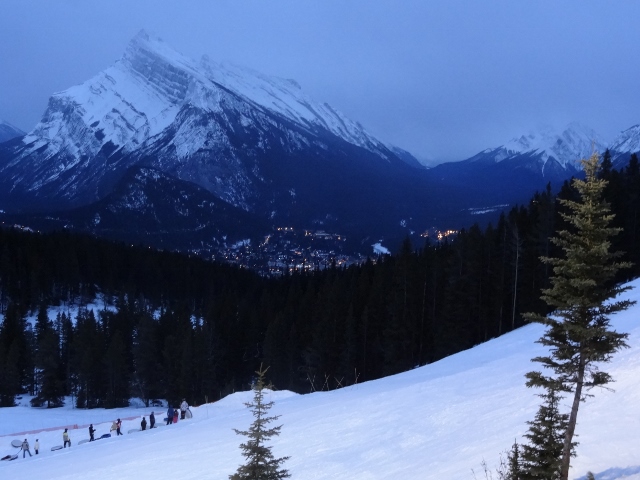 Banff at night, taken while night skiing at Mt Norquay

With Susie not mentioning much that it is her birthday next week big plans are underway for a “dayglo” themed night out!

Cocktail in one hand and wallet in the other……..Alex means business