Weeks 8 and 9 in Morzine have been two very different, contrasting, weeks for the trainees. During week 8 the sun shone and the focus for the trainees was placed firmly on having fun and putting the finishing touches to the trainees skiing and snowboarding. Week 9 was the first week of the trainees’ BASI level 2 exam which meant focusing and digging deep despite the poor weather.

After spending both Monday and Tuesday perfecting the skiers’ technique James Crompton spent his last three days with the trainees showing them some new parts of the Portes Du Soleil and having lots of fun. Wednesday was a big day for the trainees with all of them hitting the park with JC for an introduction to freestyle skiing. Although James would much rather carve an icy piste and shred knee-deep powder; it turns-out he can throw a few moves in the park. Although all of the skiers have been focusing really hard on BASI technique and honing their skills on the piste and in the bumps it didn’t take them long to adjust to their new environment and “get into it”. Although jumps and boxes aren’t necessarily everybody’s ‘cup of tea’ they all gave the green jumps and the Superpipe a go. The stand out skiers for the day were definitely Johnny and Lucy, who it seems is never happier than when she’s 4ft in the air with a pair of skis strapped to her feet. 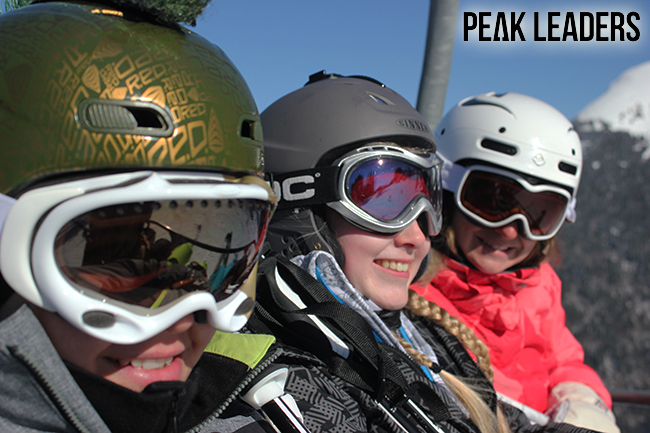 Another difficult commute to work!

On Thursday James took the trainees for a tour of all of the resorts in the Portes Du Soleil (except for Les Gets, St Jean D’Aulps and Abondance)…….no easy feat considering it’s the biggest linked resort in the World! Within just a few hours Johnny and the girls managed to ski: Morzine, Avoriaz, Chatel, Torgon, Morgins, Champoussin, Champery and Les Crosets! Although it had been a few days since the last snowfall there was still some fresh snow left for the guys to poach.

The views on the way back home weren’t too bad!

To finish off the week of training the skiers skied Valle De La Manche with James. Valle De La Manche is a well-known backcountry run well off the beaten path, which allows you to ski from the top of the Fornet bowl, above Avoriaz, down to Nyon. It’s a long run, which has some great snow and has some of the best views in the Portes Du Soleil. It was a fantastic way for the guys to spend their last day with JC who has spent a lot of time working with the girls and Johnny over the past 8 weeks.

Despite the beautiful view in the background I can’t help but focus on Gabby’s hat….

So that was the skiers; I guess you’re wondering what the snowboarders got up to over week 8? Well training with Lewis was increased from five half-days to five full-days. As with all of Lewis’s training sessions the emphasis was definitely placed on having fun and throughout week 8 the trainees had a grin from ear to ear despite some big stacks and some seriously hard work. Despite having trained really hard for the previous 7 weeks all of the guys and girls had to make some big changes to their riding: which they all did willingly and enthusiastically. It was in week 8 that the snowboarders had their first introduction to bumps, which definitely “threw a proverbial stick in the spokes”! Nevertheless all the guys stepped up to the challenge with Joe in particular putting his body on the line in the name of progression! 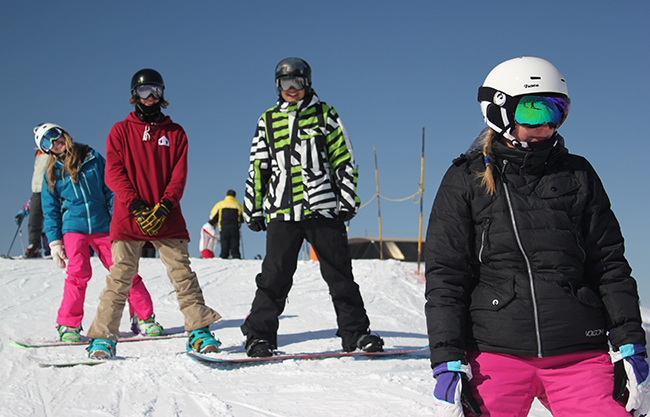 At the end of the week it was time for the guys to take their park riding to the next level. This is where Lewis sets himself apart from a lot of instructors and trainers out there because he’s never happier then when he’s upside down 20ft in the air. Although the trainees had been taking a few laps through the Superpipe and over the small green kickers in the Chappelle snowpark every day, it was on Friday afternoon in Les Crosets that the guys really ‘stepped it up’. In just a couple of hours of lapping Les Crosets kicker line Jake and Stevie had begun hitting the red kickers and getting some nice grabs and Milli, who had previously been petrified of kickers and freestyle, stepped-up to the challenge and boosted off one of the red kickers. Fair play Milli!

Lewis with a nice bs 5 for the trainees..

The weekend was a very chilled affair for the trainees with most of them taking advantage of the good snow and the perfectly shaped Chappelle park. Despite the perfect snow conditions Sam and Lydia were keen to take the day off and relax their bodies before the beginning of the BASI level 2 exam. Keen to get out of Morzine for the day and go for a bit of drive we drove to a nice little restaurant at the end of Valle De La Manche then headed up to lake Montriond for a walk on the ice and a hot chocolate in the cafe.

Sam and Lydia…….out of control on their day off!

At the start of week 9 the weather took a turn for the worst and as the cloud descended the temperature rose and the snow turned to slush on the low-lying slopes. Not ideal conditions for a BASI level 2 exam! Despite this the guys have had some first-class training from their BASI trainer/examiner’s Si and Dave. The difference between the BASI level 1 and level 2 exams is pretty significant with far more emphasis being placed on higher-end skiing/riding with the trainees needing to demonstrate good technique and a strong knowledge of the theory behind their skiing/riding and their teaching methods.  A big congrats must go to Archie who has definitely conquered his fear of teaching and has made some big improvements to his riding under Si’s instruction…..keep at it buddy.

By the time the weekend came around it was definitely a chance for the trainees to chill out and spend a bit of time working on their technique. As usual Friday was a big night; lead by Cookie and his wing-man Johnny Nolan; there were certainly a few sore heads in the morning! Not to be put off by the foul weather and in typical English style we had a BBQ in the Sunday afternoon sunshine; it was a nice opportunity for everyone to kick back and relax. Despite some of the burgers being ‘done to a turn’ everybody had a really nice afternoon and it was fun to catch up with Lewis and Tammy from Mint Snowboarding. BASI trainer Si Cooke did a great job of lighting the fire and tending to the food; many summers spent in the South West of France surfing and having BBQ’s on the beach have served him well! 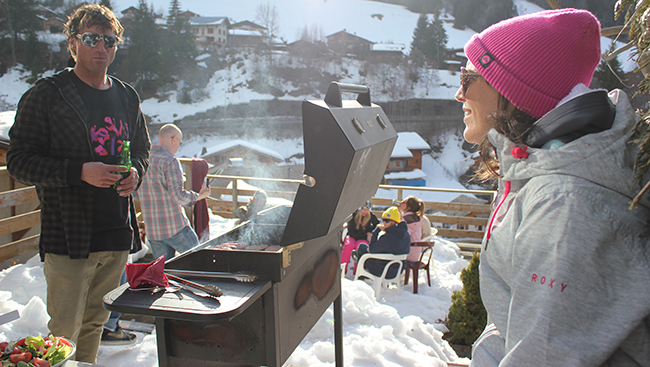 Si and Tammy keeping a watchful eye over the BBQ