Two months ago, an intrepid group of wannabe ski instructors arrived in Verbier to start their journey towards becoming BASI certified ski instructors.

The guys and girls ready for the final hurdle.

Since then, aside from a healthy interest in Verbier’s famous social scene, everything they have done has been focussed on the BASI Level 2 alpine ski exam that they are now in the middle of. On the way, they’ve all become more skilful and graceful skiers.

But now it’s time for them stand up (well not quite stand, more like assume the BASI ‘basic stance’) and be counted. The BASI examiner has arrived in town and he’s going to be watching them closely for the whole of the two week assessment.

Fortunately, a BASI examiners’ role is not only to examine but they are also charged with polishing-up any areas of the trainees teaching and skiing skills that could do with further work. They’ll also try their hardest to ensure that each trainee instructor is up to the required level by the end of the fortnight. This lucky group’s BASI examiner is PK, who; with more than twenty years of experience as a BASI trainer, is extremely good at what he does. He’s had the guys ‘ripping it up’ all over the mountain, taking advantage of some excellent late season conditions.

The group enjoying some moguls in the off-piste

Not entirely sure what she’s teaching……but Amy is teaching something!

With the sun continuing to shine down upon us, Verbier’s a beautiful place to ski right now.

A very different picture to the same view last year!

The trainees have continued to enjoy their time on the mountain despite the pressure of being examined (and trained) by one of BASI’s most experienced trainers. 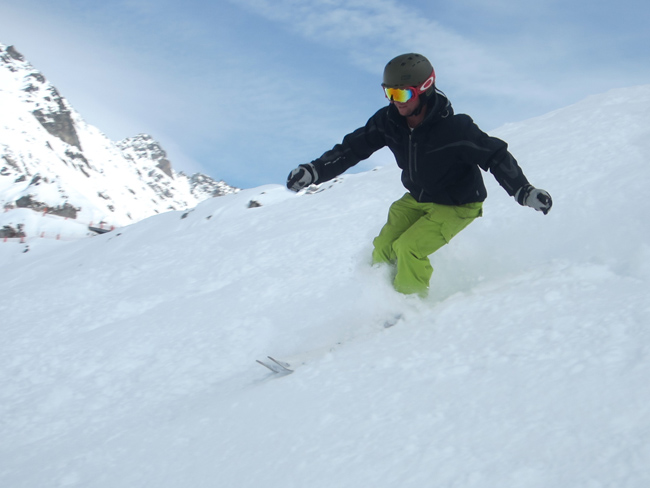 What a way for Henry to celebrate his birthday! The guys even bought him some invisible poles!

Nevertheless, the weekend came as welcome respite and included a group lunch outing to one of Verbier’s choice mountain restaurants to celebrate (soon to be qualified ski instructor, fingers crossed) Henry’s birthday.

Nowhere in Verbier is cheap…….and La Vache is no exception!

Brimming with equal measures of enthusiasm and energy, two of the budding instructors even took advantage of their days off to go parascending (essentially skiing off the side of a mountain with only a parachute, fortunately with someone who knows exactly what they’re doing). It’s not necessarily an activity for everyone, but it’s just one of the many great things to do out here besides skiing and snowboarding. 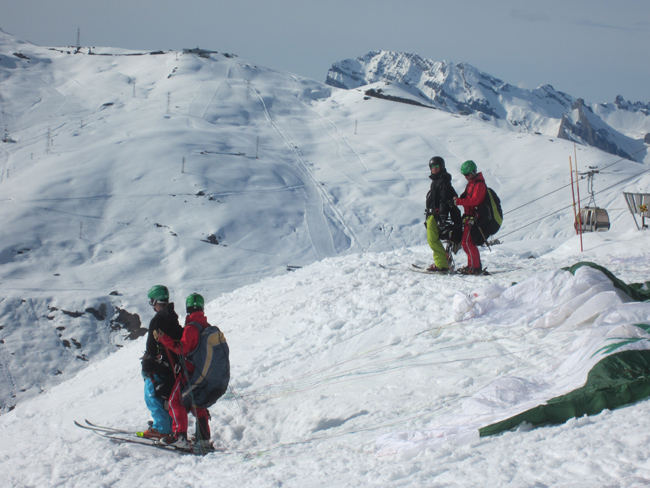 And so it’s with a mix of excitement and sadness that the trainees are now starting their last week of the course. Excited that they will (hopefully!) soon be fully qualified instructors. Somewhat sad that the season is nearing its end and that they’ve had such an awesome time that the weeks have just wizzed by. Still, it’s not finished yet and there’s still a lot of closing parties to attend (and exams to pass, of course). Results by the end of this week!

The perfect example of how ‘NOT’ to ski!