Peak Leaders’ guide to the best nightlife in Verbier

Verbier is one of the worlds best known resorts thanks to; some of the best off-piste skiing/snowboarding in Switzerland, being one of the most exclusive and expensive resorts in the world, and having a nightlife that rivals the likes of St Anton and Val D’Isere. Peak Leaders have been running ski and snowboard instructor courses in Verbier for the past 7 years and as seasonaires in Verbier are well-known for ‘burning the candle at both ends’ it will come as no surprise to hear that we know where the best places are to party. Below is a list of our favourite nights out in Verbier: 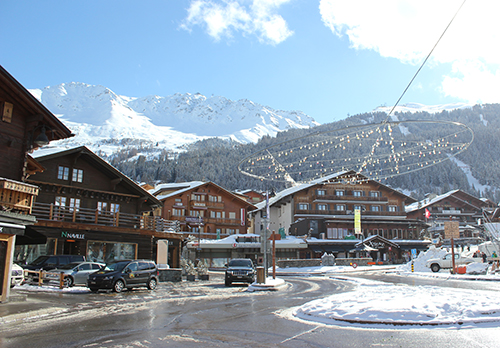 5) An average night-out!
It’s fair to say that an average night-out in Verbier wouldn’t be considered an average night-out anywhere else in the Alps. Verbier has such a fantastic nightlife that every weekend the resort swells with wealthy Swiss business men and women desperate to escape the sterile, uninspiring vibe down in Geneva and Lausanne. After a bit of skiing and snowboarding holidaymakers and seasonaires tend to have a beer at one of the main Après Ski bars in town or on the slopes. Après Ski bars worth looking-out for are 1936, which is a tent positioned on the side of the Carrefour slope, Le Rouge which has a nice sunny terrace and can feel like Ibiza on the slopes, Le Pub Montfort which attracts a lot of the younger seasonaire crowd, and the world famous Farinet Après Ski Bar which is…….mental!
Once you’ve had a few pints of ‘not so cheap’ European lager and a few Jagermeister shots (for medicinal purposes of course) it’s time to head home and grab a bite to eat before heading out for round 2. Once back in town it’s time to slow things down a little and pace yourself for the rest of the night. The younger crowd tend to head to either the Pub Mont Fort or Verbier’s newest venue ‘The Loft’ where the drinks are a little less expensive and the music a little more commercial. For the locals and returning seasonaires the T-Bar provides a nice refuge from glam and glitz of Verbier and is a nice place to have a beer, listen to some live music, watch the football on TV or simply catch-up with friends. For those who are a little more ‘flash with their cash’ and fancy sipping a Mojito while mingling with retired international Rugby players, millionaires and members of the British Royal family, the Farinet Lounge Bar is the place to be seen. 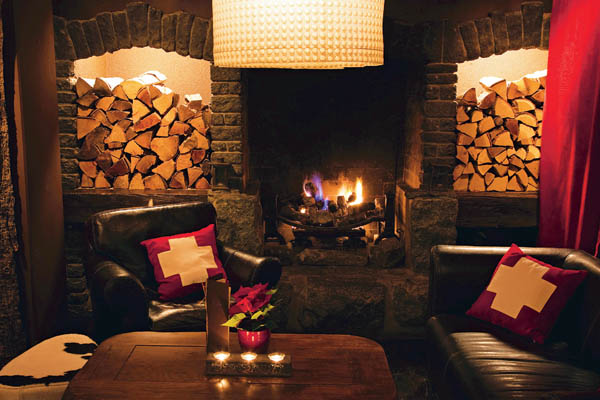 For those who have no desire to catch the first lift in the morning and want to continue partying into the early hours there are three main nightclubs in Verbier. If you’re keen to mingle with high society, and you’re the kind of person that enjoys buying your alcohol by the bottle, venues don’t come more exclusive and expensive than the Farm Club. If house music and cocktails sound like a good combination then head to Coup d’état which has become a popular venue for the returning seasonaires and ski instructors who like the clubs friendly vibe. If you simply want to dance to commercial music and continue the nights festivities then the Casbah is your best option.

4) Farinet Après Ski closing party
The Farinet Après Ski Bar is considered by many as one of the liveliest après ski venues on the planet, fact. Nevertheless, it’s fair to say when the end of season comes around and hundreds of over-excited seasonaires fill the venue to celebrate the closing of the resort the partying definitely goes up a couple of notches. If you fancy dancing on tables to live music from local legends the Dicktators and covering your friends in beer then we would suggest you arrive at the Farinet Après Ski Bar nice and early to get a good spot at the bar! It’s advisable not to wear your favourite threads because you’ll more than likely get covered in booze!

Not the kind of place you go for a quiet pint!

3) Dine at La Marmotte restaurant and sledge home
One restaurant in Verbier which has carved-out a reputation for having an amazing atmosphere and cooking-up delicious traditional local food is La Marmotte. La Marmotte is positioned half way up the slopes of Savoleyres and is a great venue to spend an evening with friends and family. We’d suggest hiring a sledge and heading up to La Marmotte on the last bus, which stops at Carrefour. Once at Carrefour walk up to La Marmotte along the piste, which takes around twenty minutes, and take your sledge with you. Once at the restaurant we suggest you order-up a Raclette or Fondue and a nice bottle of red wine to enjoy a relaxing evening in front of the log fire. Once you’ve finished your meal it’s time to sledge all the way back to town and grab a few drinks at Le Rouge! 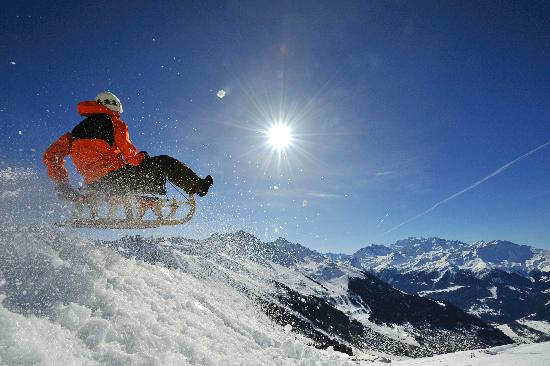 Somebody’s in a rush to get to the pub!

2) Mardis Gras at Le Rouge
Mardis Gras in Verbier is, together with New Years Eve, one of the biggest nights on the Verbier calendar and ‘the venue’ to head to on this night in February is Le Rouge. Le Rouge holds a 24-hour nonstop party which runs continuously from midday through to midday on the following day. Unsurprisingly there is always a fancy dress theme to the evening, which changes yearly; previous themes have included Walt Disney and Police Academy. The music policy is house music and the drink of choice is, as you would expect from one of Verbier’s trendiest venues, Champagne.

1) New Years Eve at Place Central
New Years Eve in Verbier is quite unlike any New Years Eve celebration you’re likely to witness in a ski resort. It seems that half the population of Geneva and London cram into the centre of Verbier to drink champagne, let-off fireworks and welcome-in the start of the New Year. For this one night 12,000 people, including: holidaymakers, local residents, seasonaires and the hedonistic populations of Geneva and Lausanne cram into Place Central. The atmosphere is electric and there’s very little need to pay the extortionate club/bar entrance fees because the party continues on the streets until the early hours.

Definition of a ‘bad idea’ – cram as many people as you can into a small area and give them fireworks and alcohol!

CHOOSE YOUR NEXT ADVENTURE: