Following the excitement of finally getting some work in last week, I was feeling pretty keen to get some more lessons. The weather, however, had other ideas… and early in the week it was just rain, rain and more rain.  Luckily we had our ‘First Season Orientation’ inside on the Wednesday. This was an introduction to all the new employees going over the ethos of Whistler Blackcomb, as well as a talk about customer service, a bit of history of the resort and how to keep our bodies intact for the summer.

It even rains in paradise

Also since business was pretty slow due to the weather we didn’t miss out on much work. Many of us then decided to take a day or two off to recover and get us ready for the weekend, with it being a bank holiday 3 day weekend, since it was Canada Day on the Monday. Some of us went about fixing our bikes that were getting a bit of a battering from riding every day, so our kitchen turned into a bit of a mechanics workshop for the evening… 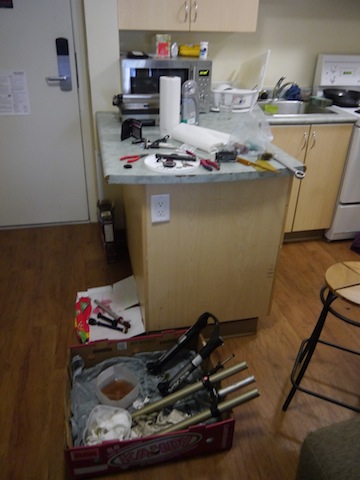 We also managed to find a cool trail running down from the top of staff hill down to the bottom of the lift. Although maybe not to ride to work along, given it had some sizeable jumps and drops, which meant it was not something you wanted to warm-up on in the morning.. As the weekend approached we all got geared-up for what promised to be a really busy couple of days, especially as the weather was set to improve.

Fortunately the weather did improve, turning-out to be a scorcher, the hottest day of the season so far, with temperatures moving into the 30s. Unfortunately, it was almost too hot for most, and not many people were out looking for tours. Although most of us did get work over the weekend, it was only one lesson, not the constant all day guiding we had expected. Not many of us were too bothered given how hot it was, even in the shade! 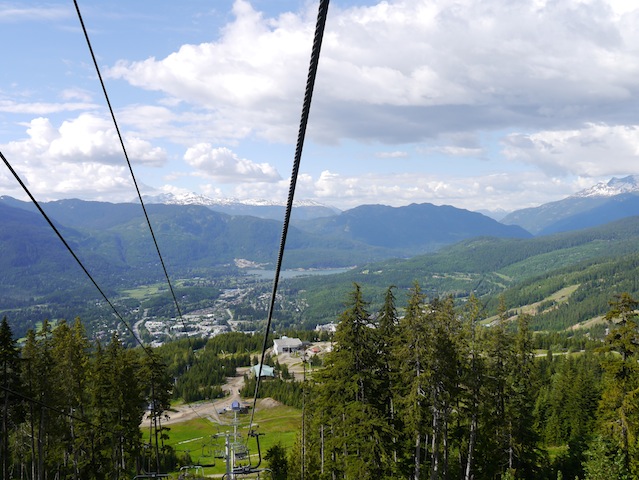 The commute to work. What a grind.

Monday (Canada Day) then followed, and business picked up. There was a parade through Whistler village which was cool, and it was obvious that the Canadians take patriotism very seriously compared to the UK where often St. Georges day passes without much of a big deal. Here though the town was buzzing, with everyone out wearing white and red, along with many versions of “Oh Canada” being sung that made for a great party atmosphere.

Business was pretty slow in the afternoon but began to pick up again for ladies night. This is held every Monday and Wednesday (Men get their own night on Tuesday), and gives ladies the opportunity to get some cheap guiding and the chance to win prizes after for a reasonable priced lesson ticket (some of which are amazing, last week there was a set of brand new Boxxer suspension forks). This was the busiest it had been, but since lots of guides turned out, it meant little opportunity for us first years to get a lesson. Not many of us were to bothered, and since the weather was nice we decided to head up to the Garbo zone for a bit of a photo session. Big shout to Lukas Hartung for his photo expertise, as we managed to grab some bangers! Another good end to the week, and hopefully business is meant to pick up as everyone in Canada starts their summer breaks.