Last week was an  extremely  busy week for  the trainees  here in San  Carlos De  Bariloche.  Having had  bad weather  predicted on  Monday and  after taking an  extra day  training the  weekend  before, the  trainees had  a day to  relax. They  used this time  to visit Bariloche for some shopping, some of the trainees came away with some great finds and some came away with some absolute clangers. There are plenty of shops that rent onesies (one piece ski suits) but one shop in particular worked some serious magic and was able to sell the trainees some rather fashionable numbers (fashionable in the 1980’s when neon coloured headbands and rear entry ski boots were all the rage).

Cerro Catedral back in the day!

The next day all of the trainees got a chance to try the Giant Slalom course. Having watched the professionals do it the week before they were all keen to give it a go. After a couple of runs every trainee could appreciate the difficulty of skiing gates and could see how competitive ski racers can be, it was great to see the trainees pushing themselves more and more with every run. 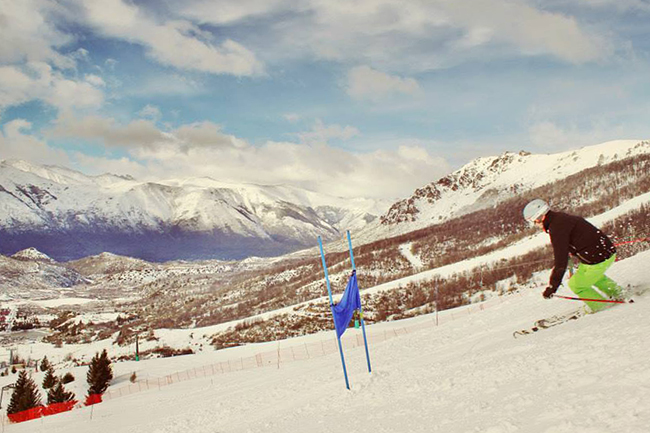 Giant Slalom in Patagonia…..not something you do every day! 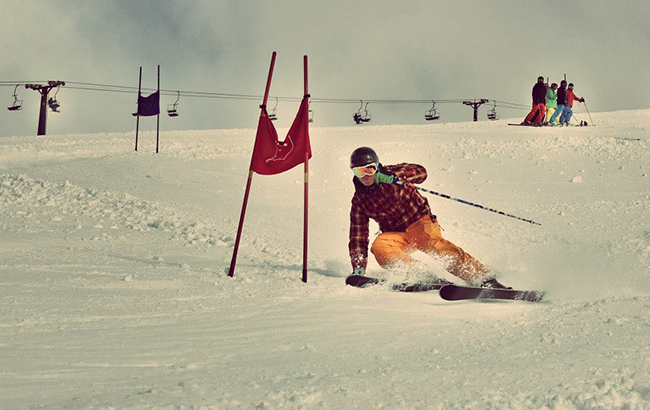 On Wednesday we had another big dump of snow. A good 20cm of fresh snow fell on the piste. Off-piste there was some seriously deep powder skiing. Conditions were great fun and everyone was able to find fresh lines all through the day, thanks to their trainers who are also qualified Mountain Guides.

One way to put a smile on your face!

Powder with a view!

Thursday the trainees were put through their paces again in the form of freestyle training from some of Club Andino Bariloche’s best freestyle ski coaches. The crew began by learning the basics such as skiing backwards before moving to the park. After mastering the basics the guys and girls had an introduction to the beginner rails, boxes and jumps. Each trainee built up confidence to go bigger and bigger, with some of the trainees doing 360’s over the jump. Everyone really enjoyed themselves and were super enthusiastic to try new tricks and go outside their comfort zone. Learning the basics in the snowpark will help the trainees as instructors because freestyle is an increasingly more important part of skiing, especially with the recent inclusion of halfpipe and slopestyle into the Winter Olympics.

On Friday the trainees spent the day shadowing local ski Instructors. Bariloche is very popular as a destination for school ski trips, especially from Buenos Aires. The trainees had fun helping some seriously outnumbered local Instructors who were delivering ski lessons to hundreds of hungover Argentinian high school kids. In the evening we were all bussed up to a mountain refuge where we were treated with fine wine and ale, accompanied by Argentina’s answer to the Gypsy Kings and steak……..obviously.

Is this Argentina’s version of the Gypsy Kings? 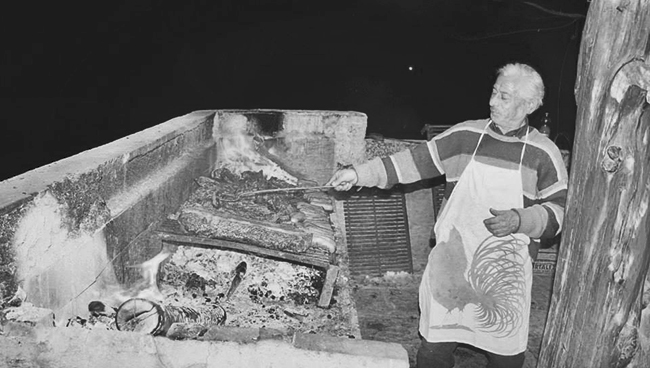 Mario cooking up a storm

Saturday we celebrated one of the trainees birthday, Hector Cambell. After a morning ski we welcomed the BASI trainers/examiners (Rupert Goldring, Gavin Crosby and Mo Duffy) with a Saturday night Assado (Argentinian BBQ). We also welcomed three Australians who are here to do the Freestyle/Freeride Snowboard course.

What a way to spend your birthday!

Next week the trainees commence their BASI Alpine Level 1 exam…….so obviously they were busy revising on Sunday! Good luck guys!

Being a ski trainer in Argentina isn’t a bad life!