Working as a guide at Whistler Bike Park – Blog 7

Things kicked off on Wednesday with one of my bike 101 lessons being filmed by some promotional guys from the Wanderlust Festival, it appears they were making a video on the other things to try in Whistler during the festival. Although I felt the added pressure of the camera to begin with, I soon relaxed and gave a good lesson in the end! It’ll be interesting to see what my lesson is like from the clients perspective. 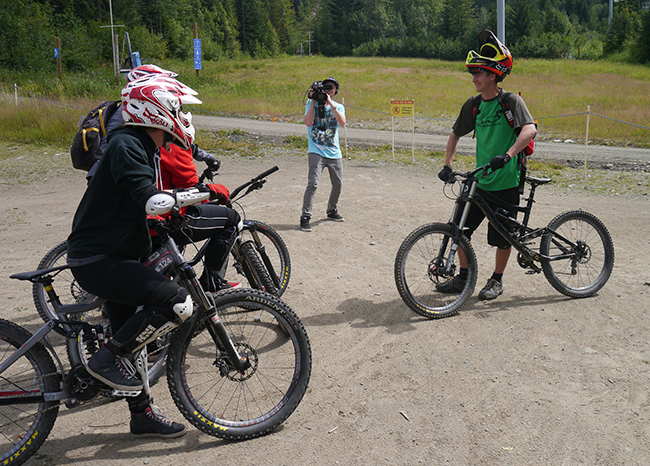 John teaching a lesson in front of the local media.

My friend Duncan also arrived for the Crankworx ‘Deep Summer Photo Challenge’ competition. Luckily he got a few free passes for the ‘Top Of The World’ trail, so we headed up for a shred down with perfect blue skies. I also spied Joe Barnes and Fabien Barel shredding down in preparation for the World Enduro Series race this week, which was pretty cool. If that wasn’t enough I also had my first puncture stop of the, but I could think of worse places to get a puncture! Having a free ‘top of the world’ season pass is pretty awesome.

This weekend was Dusty’s BBQ competition down in the Creekside area of town. After seeing an advert for an all-you-can-eat buffet: myself, George and Lukas headed down to sample some (cram as much as possible) of the $30 pork buffet. Hands down the best BBQ I’ve been to, the pork was super tasty and it was the protein binge we needed after a hard day working. Despite a typical English setting for a BBQ (rain and a thunderstorm), it didn’t dampen the spirits of those there. 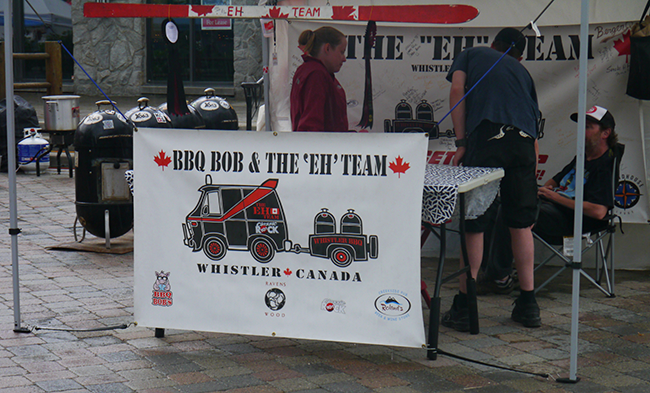 We’re not keen on racial stereotyping but………

Things started to kick off in the village in terms of preparations for Crankworx at the end of the week. A few of the TV towers have gone up on the Redbull Slopestyle course, and the Fox Racing truck has set up shop next to the Fitzsimmons lift. No doubt I will be making numerous trips trying to blag free stuff whilst it’s here…

Preparations for Crankworx are in full swing…….while John plans his next scam!

Over the past week a few of us got a bit fed-up with hanging around the apartment in the evening so took Steffen’s golf club and balls up to the ski slopes behind the staff accommodation to swing at, and occasionally hit some (Happy Gilmore esque) shots, which was awesome fun. Definitely a stress reliever! (Being that it’s so stressful living in Whistler and Mountain Biking every day – Tom)

The week ended on the busiest day of the year so far in terms of lessons, with about 50 people showing-up in the morning wanting lessons! This amount of people made for a fairly manic skills area. Business has definitely picked up this week, but the craziness is set to die down whilst Crankworx is in town. This should make for a nice break from the hectic last couple of months. Bring on Crankworx! 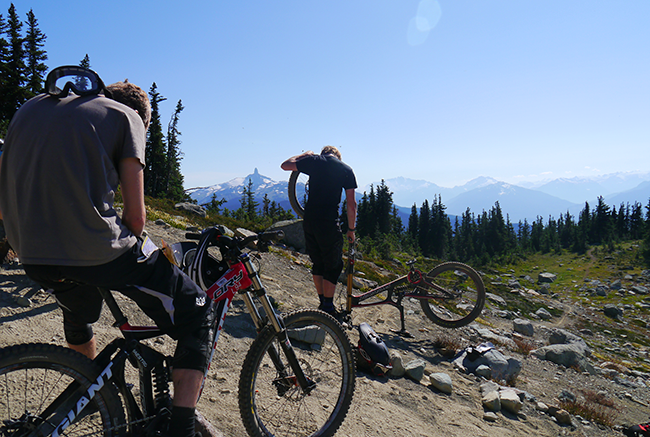 John’s first puncture since arriving in Canada…….there are worst places to fix a wheel.