Working as a guide at Whistler Bike Park – Blog 8

I started this week with a day off, the days before had undoubtedly been the busiest few days of the season so I deserved a rest, and had a few things to sort out in town. One of those ‘things’ was purchasing a new chain guide, I’ve broken two already, so third time is a charm…….right? 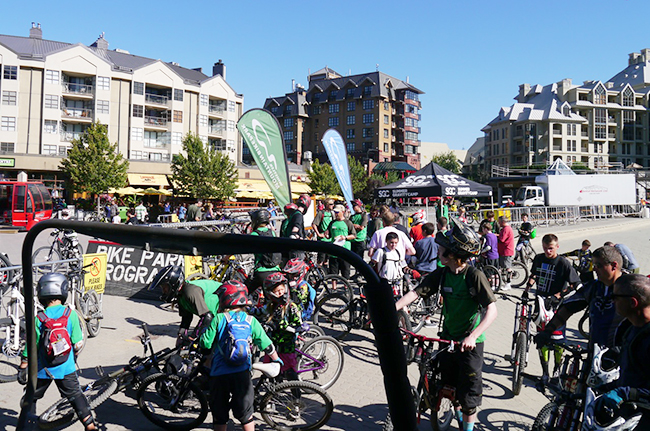 Being the best place on the planet to ride means Whistler does attract a few people!

Thursday and Friday I had Garbo Practice! Initially this meant following George down the trail to show me the best lines. That was swiftly followed by a non-stop run of the top half of the course, which was when I realised exactly what I had got myself in to! That evening I spent some serious time with Lukas and George servicing my front suspension forks, this meant getting 4 pairs of boxers serviced and switching my own forks from air to coil.

Servicing bikes can be forking time consuming……get it

In case you didn’t already know “CRANKWORX has also arrived in Whistler!” Bringing with it all the crowds, expo’s and (famous) pro mountain bikers. I was fortunate enough to see some of the Dual Speed and Style but didn’t get to see the finals as I had a full days work. In what spare time I had I walked around the Crankworx Expo, there was so much free stuff (in case you didn’t already know: John likes free stuff…..a lot) including multiple visits to the Clif Bar stall for a ‘few’ free samples, these kept me going during my full day of lessons. I also had my first XC tour around the Lost Lake, which made a nice change from teaching in the park.

The Enduro World Series stage also went down on Sunday, and a few of the guides were lucky enough to marshal the first stage up at ‘Top Of The World’ and ‘Kybers Pass’. Due to the early start, this meant camping at the top of Whistler Peak for the night to make it down to the marshal points before the racers.  This gave them the chance to hang with some Pros (Tippie and Kovarik amongst others), get fed some free pizza and beer and watch the sun go down to the background of thunder and lightning in the distance and meteor showers overhead. All in all, a pretty epic night! The only downside was being eaten alive by flies….

Base Camp for the evening

An epic sunrise at dawn

On Monday I had a day off to prepare for the race on Tuesday. I felt good on the bike and just rode all of my lines, trying not to tire myself out too much before the big day.

My bike fully prepped, including a borrowed dropper post!

Race day came. I smashed out a practice run and some warm up laps in the morning. Feeling pretty fatigued from the last week of work I decided to chill out for a few hours before I headed up with fellow bike guide racers Matt and Jeremy. After some quick stretching and hollering at some racers before me, my number was called. Three beeps and it was ON! I got considerably wild on the first few corners, much to the delight of the spectators that had made the trip up. Unluckily this was also the time I finally got my first mechanical problem of the season, my gear cable snapped whilst in top gear. Leaving me to finish the race in the hardest pedaling gear, which wasn’t ideal given the section I was headed into was the most technical  of the course and had some slower parts to it. Nevertheless I still managed to make it down the rest of the course hitting all of my lines, even overtaking one guy on Duffman, and managed to catch another at the entrance to Monkey hands, the last section. Unfortunately this guy wasn’t so considerate and I was stuck behind him until the end slowing me down by a few sections. Don’t think my mouth has ever been so dry from inhaling all the dust from the course!

All in all, a super fun race, although it certainly left me pretty tired! I managed to finish the course in a time of 15 minutes and 9 seconds, placing me 28th out of about 70. I’ll definitely be coming back next year to try for a sub 15 minute time! 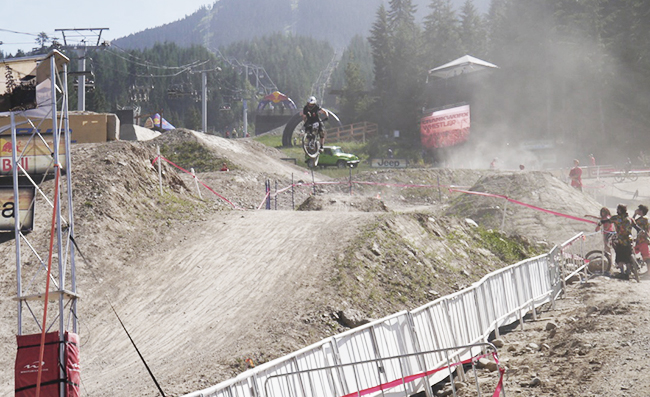 Bike Guide Matt giving it some racer steeze over the final jump. 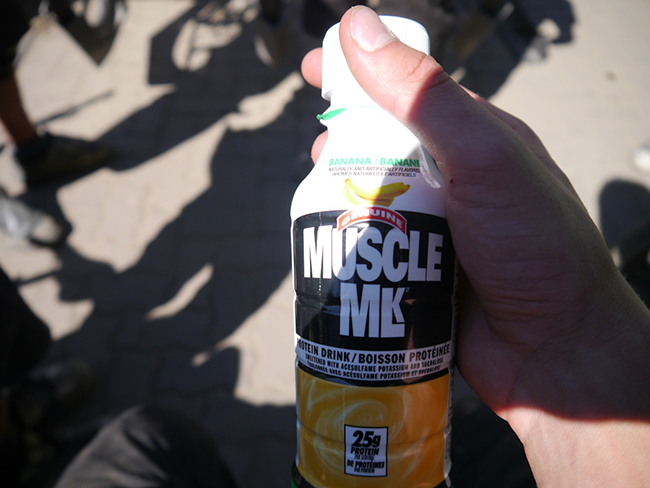 We all know John loves his free stuff…….Muscle Milk and Clif Bars all day long!