Working as a guide at Whistler Bike Park – Blog 9

The madness that is Crankworx Festival continued last week, and following on from the Garbo DH on Tuesday, it was straight on to the Fox Air Down Hill. I had a lesson in the morning, which I found fairly hard following my ‘race-hangover’ from the day before, but I finished guiding at lunchtime and managed to go and watch some of the race. I headed down to the course with fellow PL trainees Lukas and Kyana (who managed to get third place in the Womens amateur category…….big shout out!). We joined in the mass of people that had gathered around the three pack jumps after the ‘EZ does it’ bridge. Fortunately we got to see some of the pro’s come down the course, throw some sick scrubs and also see Brian Lopes get the silent treatment on his run (he’s not all that popular around these parts). 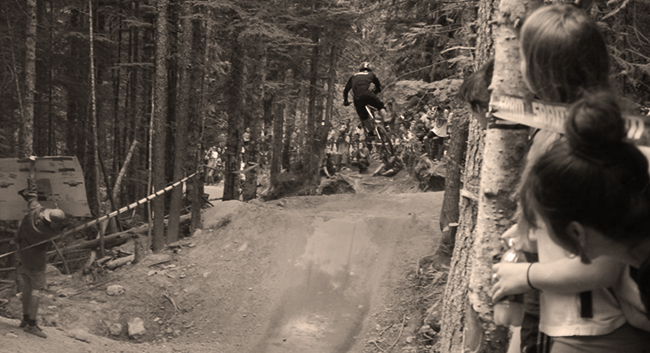 In the evening we all headed down to watch Kyana get her medal at the presentations down by the olympic stage, then hung around for the ‘Deep Summer Photo Challenge’ slideshow. This was a competition open to 6 chosen photographers to produce a slideshow shooting in only 4 days to showcase what the ‘Sea to Sky corridor’ has to offer. My friend from back home Duncan took-part, so made sure he got lots of support! The standard was super high and it was an awesome experience to see the shots that these photographers all took during the competition.

Thursday was the Teva Best Trick competition, and after work some of us headed over to watch the slopestyle riders showcase their bag of tricks. Needless to say there were definitely some crazy moves being thrown down! Mike Montgomery won with a backflip bar hump to tail whip…

The world famous ‘Whip Off’ took place on Friday, and although I was working I lent my camera to my friend Dave to go up and take some pictures. I also had a private lesson, but took the chance to show my clients the competition as it is pretty impressive, and the atmosphere was considerably rowdy! I also took the chance to get some of my own riding done in the afternoon, but had my first bit of bad luck this season. Whilst coming down I misjudged my speed into a corner and ended up going over the handlebars into a ditch, slowing myself down by hitting my wrist into a boulder. After sleeping on it with the pain persisting into the next day I headed down to the clinic to get it checked-out and unfortunately I’d sustained a dorsal fracture in one of the bones in my wrist. Obviously I was disappointed, but very glad it had been the only injury that I came away with from the crash……and that it had happened after Garbo! The healing time could be anything from 4 to 6 weeks, but the Doc said I could get out and do some easy riding with my splint on once the pain and swelling had gone down. Legend!

Another tail whip for the crowd. 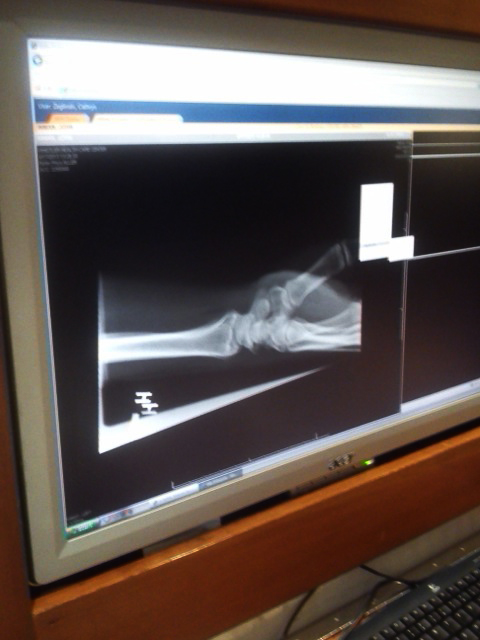 After that disappointment we all headed into town for the screening of the new Coastal Crew and Anthill films movie, ‘Arrival’. Although it was “chucking it down” with rain, it subsided just before the film started and it was genuinely one of the sickest bike movies I’ve ever seen! It left us all really stoked to shred (obviously I’ll have to wait a little longer!).

Redbull Joyride then followed on Saturday, undoubtedly one of the showcase events of Crankworx. A pretty big crowd had gathered around the joyride course, with many climbing trees to seek out better views. Most of the pro’s were laying down some big runs, but Semenuk, Soderstrom and Sam Pilgrim all stood out as having particularly smooth runs with good tricks. Semenuk went on to win, with some awesome ‘oppo’ tricks in his run. Although I would say that had Soderstrom landed his last run he could have challenged for the win, but unfortunately a crash on the last jump of the course left him with a broken leg (Get well soon Martin). 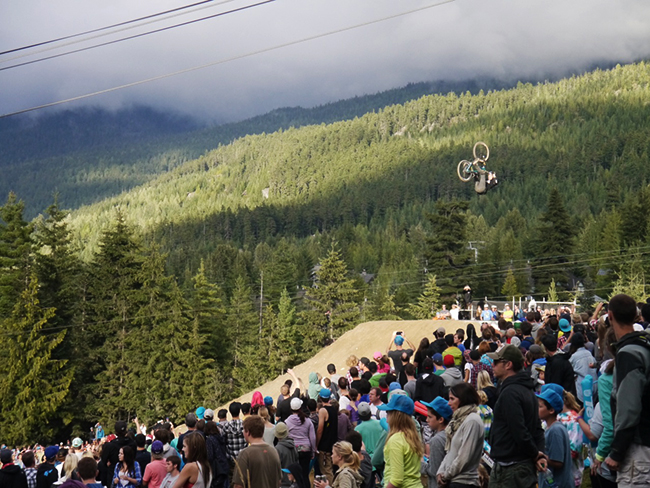 There were some seriously big tricks being ‘thorn down’ at Crankworx

Sunday hailed the last day of the festival, and with it the Canadian Open DH. Heading down to watch practice, the course always ends with a pretty sizeable jump and this year was no exception. If anything it seemed a bit on the big side, meaning many of the amateur categories had been having a fair few crashes, not something you want to see! I went up to watch/heckle with George and Lukas. After a visit to ‘Heckler’s Rock’ for the first few Men’s categories (which was already getting pretty rowdy) we went to watch the rest of the race in one of the particularly rooty and fast sections. It was amazing to see how fast the professionals can ride the super gnarly/technical stuff, after having ridden the same trails I definitely have a new found appreciation for their skill! The atmosphere was pretty wild, since Devinci had been going around giving out free cowbells so we were all pretty sick of the sound of them by then end.

If half-naked Canadians, beer bongs, cowbells and heckling are your thing….this place rocks!

All in all another awesome week, all be it with a disappointing ending. It was great to see what Crankworx was about, and hopefully my bones will crack-on with healing themselves so I can get back out on the bike before the end of the season!