Week two of the Saas Fee Peak Leaders Instructor course went off with a bang, which was in fact a fresh dump of snow! The weather this week has been awesome, snow showers and sun, the same kind of conditions you would hope for during a mid-season holiday.

Saas Fee at the beginning of October…..not bad eh!

Everyone seemed really excited and motivated for the beginning of the second week of training, before starting their BASI Level 1 next week! One ski group spent hours practicing the hard drill of skiing on one ski to improve their balance. This was particularly tricky and painful when going up the steep T-bars, but highly entertaining to the other groups!

Video feedback time…………this can be a thoroughly humbling experience!

Both the skiers and snowboarders took an important step towards becoming instructors by independently delivering a teach session on central theme to their peers. Central theme is the progression that BASI use to take someone from a complete beginner up to linking turns down the piste. The guys and girls really embraced the idea of acting as instructors and it’s fair to say there were some impressive sessions for their first time teaching. 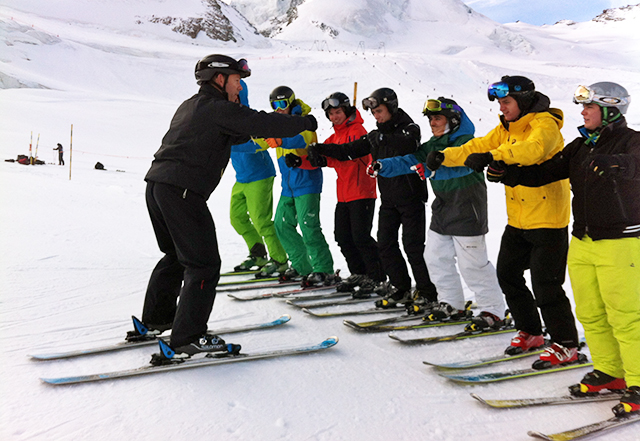 A driving/ski lesson in progress

There has been a lot of extracurricular entertainment outside the skiing and snowboarding……a brief  summary would include: highly competitive table tennis tournaments, German language lessons, the trainees finding Ice Tea in their ski boots, a couple of flourishing romances, and some interesting/eventful dancing! The highlight of the week for the trainees was without doubt the visit of Group Leader Emma’s puppy Indie, which quickly became the Peak Leaders mascot!

Nevertheless, for pure entertainment purposes the dancing needs a further mention. While out on the town the boys have started showing off the flexibility and strength skills they are developing on the hill. This has involved turning their hand to pole dancing in one of the nightclubs! The snowboarders have been learning lots of freestyle tricks on the hill with Gibbo and have been trying to take these tricks to the dance floor. Unfortunately one particular snowboarder didn’t quite pull it off on the dance floor and lost half his front tooth! Fortunately it’s all fixed and good as new now … but huge entertainment to the group!

It’s fair to say there’s a bit of testosterone on the course, so everyone is becoming pretty competitive with their skiing and boarding, upping the stakes on the Table Tennis table (which has involved copious amounts of marshmallows), and the latest competition has been a Moustache growing competition! Clearly the best way to find the Alpha male in the group……?  The guys protest their just getting in some practice before they have to grow the real thing for Movember. Here is the manly evidence …

This isn’t practice…..it’s a much needed head start

Everyone has loved their last week of training towards their BASI Level 1 Instructor Course and had an awesome time with their trainers. This weekend it has ‘dumped it down’ with snow and looks like the snowfall will carry on all next week, especially as the temperatures are dropping. Bring on the powder … and BASI Level 1!