This week those skiers who were virgins to Freestyle Skiing experienced life in the air and, in some cases as a pile on the floor, for the first time. Nevertheless, they didn’t jump straight in at the deep end. This year the trainees were lucky to have coaching from awesome Italian Freestyle coach Marco Polo, who used to compete on the International stage and is still pretty handy. In Saas Fee there is a huge Superpipe which the group tackled, however it was quickly named ‘The big icy monster’ by Michel who found the vertical walls a bit scary. Marco, realising some of the trainees were new to halfpipe skiing got them to follow him. However, what Marco didn’t realise was that ex- Royal Marine ‘Marty’ was in a controversial snow plough while following him…….which is a cardinal sin!

No pot of Gold at the end of this rainbow I’m afraid…..just Tobin.

Another comedy moment was on the kickers. Jaspar didn’t quite clear the knuckle (the transition between the flat ‘tabletop’ and the landing) so his skis stopped dead and he double ejected from his skis catapulting himself through the air and eventually sliding all the way to the next kicker on his belly, like a Penguin. The group found this and many other moments highly amusing … some were crying with laughter! The most important thing, other than having a great time, was that the guys and girls learnt the correct and simple progressions to teach freestyle skiing safely. Thanks Marco for a fun day!

Jaspar getting ready for his signature trick

This week has also been the groups’ first chance to shadow other coaches and instructors, which is an essential part of training to become an instructor. The trainees were lucky enough to shadow a race group from Kandahar, which they all found a different and invaluable experience in their path to becoming an instructor.

The skiers have been taking on some more challenging balance drills this week, which resulted in numerous crashes and falls. Jack got so enthusiastic about the drills that while the lift stopped for 30mins he decided to hike up the piste to practice them. After a couple of minutes he had a contingent of skiers following him up the piste with skis on their shoulders. To the amusement of the rest of the group, they took the T-bar and arrived at the same time … but Jack was still proud.

Mt Everest eat your heart out!

One of our many trips on the funicular this week was brightened-up by men dressed in suits! After enquiring as to why there were so many smartly gentlemen were heading up to the glacier it transpired that the BBC were filming an episode of ‘Don’t tell the bride’ in the revolving restaurant at the top of the glacier. After some banter regarding their attire, they told us that their bus driver had refused to pay any tolls through France so it had taken them 28hrs from London! They must have needed a party by the time they got here! 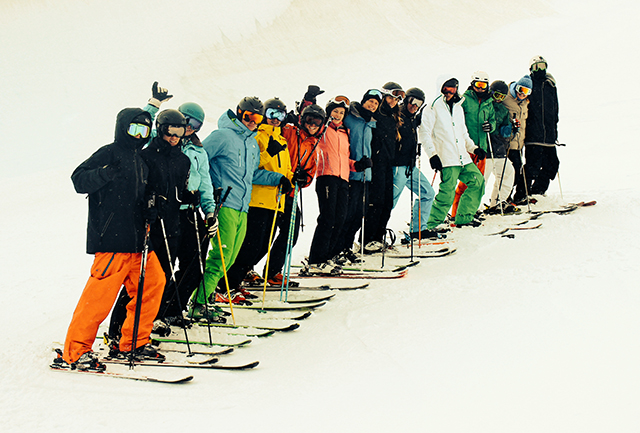 The most appropriately dressed group in Saas Fee

Toward the end of the week the groups attention switched to avalanche awareness training. It was a very useful and interesting day, especially as the trainees got the chance to go out on the hill with transceivers and do some actual simulated searches. As they say “knowledge is power” and hopefully it will help the trainees make educated/considered decisions when skiing and snowboarding in the future.

In other news: two of the skiers took it upon themselves to have a go at the Skier Cross course this week. However, the size of the rollers at the end of the course took them completely by surprise. After completing the course the first time the aforementioned trainees upped the ante and decided to race……..only to fall at the final hurdle! Everybody remained relatively unscathed except for Michel who got a little ice burn on his face, which he proudly sported at his 18th Birthday the next day. This weekend has seen a double whammy birthday bonanza, with both Michel and Seb celebrating…… unsurprisingly the other trainees made sure they celebrated in style!

Recently we have fallen victim to high winds, attributed to the big storm (St Jude) which has been sat in the Atlantic Ocean. Unfortunately this has lead to a couple of days when the mountain has had to close. However these days off the mountain have been put to good use with the trainees practicing some freestyle maneuvers on trampolines, and hitting the skate park instead of the snow park! With the winds dying down and fresh snowfall expected, next week should be awesome.