LIVING THE DREAM: An interview with course graduate John Inman

We love it when we get a trainee that is enthusiastic, passionate about shredding, and keen as mustard. John ticks all of those boxes; he loves everything to do with mountain biking, from the people, to the trails, and the gear……..especially when it’s free! We were really fortunate to have John on our 3-week Whistler Bike Park Academy this Spring as his attitude and film-making skills were a real asset. Following his time on the course John was one of the many course graduates that was offered a job at Whistler Bike Park for the summer season, which he was understandably stoked about! 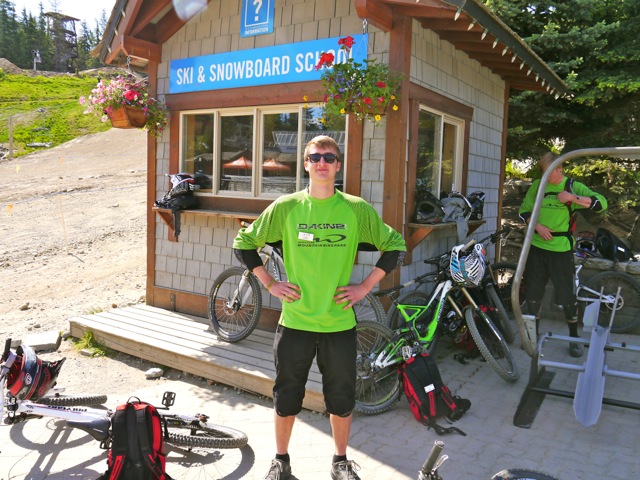 A newly qualified John looking ready for the summer ahead

After being such a ‘legend’ on the course and keeping a compelling blog throughout we asked John to write a regular blog for Peak Leaders, to document his life as a Mountain Bike Guide. You can read John’s blog HERE. Not only did John have the time of his life out in Canada but he loved his job and took his riding to new levels. We caught up with John, who is now back in the UK studying, to ask him a few questions about his experiences on the course and life as a Whistler Bike Park Guide:

Which Peak Leaders Mountain Bike course did you take and why?

I chose to take the Peak Leaders Hiring Camp that began in May. I felt as if my riding was at the standard needed to work and wanted to get straight into teaching and earning some sweet dollah! 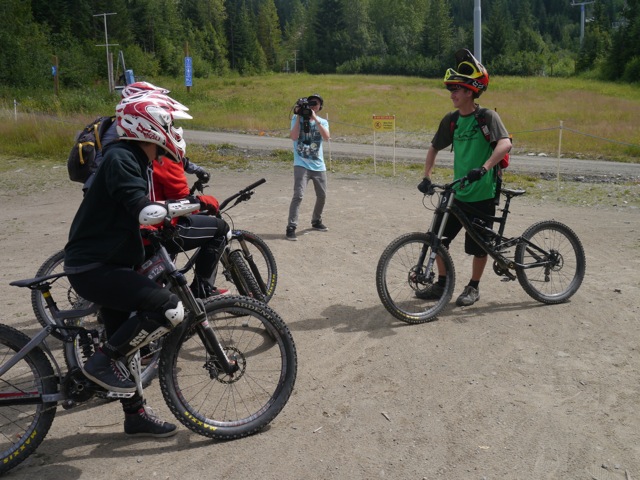 John instructing a group in front of the cameras…….yeah he’s that good!

Was the course what you expected it to be?

To an extent it was, I had a decent idea of what content we would cover but I had not anticipated how intense the 3 weeks would be. We did cover a lot of stuff quickly, but the coaches did a really good job of helping us keep on top of it and get it right first time!

Did the training on the course give you the skills and knowledge to work in the Whistler Bike Park as a guide?

I was very impressed with the course and the coaching. Mike, Javi, Tom and Duncan (our coaches) really did a good job at getting us to teach the right stuff and deliver it properly. The coaches pointed out common mistakes, ways to help improve people’s confidence and get them progressing quickly as well as their own pro tips. Their collective experience in mountain bike instruction really showed and gave me, and my course mates, all the confidence we needed. So when we started the job we knew we could do it well.

What was your favourite part of the course?

On the very last day of the course following the assessments, an un-named individual high up in the Whistler Blackcomb ranks got us permission to head up to the top of Whistler mountain on the gondola and scout out the Garbanzo trails 3 whole weeks before they opened it to the public. This also involved heading down some still snow-covered ski runs, quite possibly some of the most fun I have had on my bike! Carving down pristine snow with everyone struggling to stay on the bike, whooping and hollering, so sick!

The trainees shredding Garbanzo 3 whole weeks ahead of anybody else

Amazing. It’s fairly touristy but still retains a good sense of being ‘Canadian’ with plenty of locals kicking about. Night life is good, weather is incredible, possibly the best bike park in the world……what more could you ask for?

What is your favourite trail?

It’s quite hard to say one trail in particular that was my favourite. There are about 70 in the bike park so choosing one is difficult!

For ‘flow’ trails I would have to say ‘B-Line’. Really flowy with big berms: it was great for teaching, but equally as fun to mess about on once work had finished.

For the ‘technical’ trails, I think ‘In Deep’ to ‘Duffman’ was my favourite. Great mixture of rocks and roots, and once you got an idea of the layout of the trails you could really ‘open it up’ and make it down pretty quickly.

For a trail that mixed the two together, I think ‘Top Of The World’ has to take it. There is an incredible vista of the black tusk from the top on a really exposed rocky steep section, then into some really flowy wooden singletrack…….pretty epic.

John and the crew heading out for a shred.

Did working as a guide at Whistler Bike Park meet with your expectations of the job?

I think it really exceeded my expectations. I had wanted to coach Mountain Biking, but had no idea how much I would enjoy the teaching aspect! Not only do you get to ride your bike and get paid (pretty good in itself). But you get to meet a whole range of people from across the globe, help them to progress and see their satisfaction as they get stoked at the end of lesson!

Did you work as much as you wanted to?

Initially it was a bit frustrating as business started fairly slowly (during June), but it came thick and fast during July and August and got as much as I wanted to during those two months. But you do need to remember to give yourselves days off to recover, as it’s a very physical job. However, having a day off is a great excuse to get out of the Whistler bubble to see the other awesome places in British Colombia. 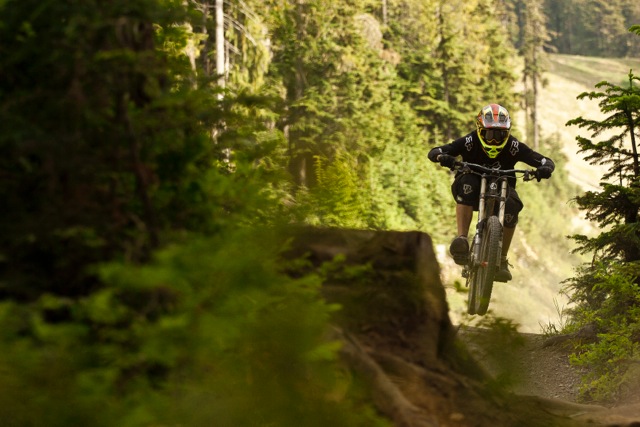 Reading your blog it sounds as though you did a lot of cool things and met some very cool people. What was the ‘defining’ moment of the summer?

So many highlights from the summer, I got to race in Crankworx, meet Joe Barnes and Fabien Barel, get free cooked breakfasts, teach some awesome lessons with great clients, and just generally shredding evening laps after work was pretty good. Nevertheless, I’d have to say the defining moment was probably the first time I rode the ‘Top Of The World’ trail with my mates from the course. It was the kind of thing that I had imagined doing that kept me going during the winter working in a dark library on my dissertation! It really summed up the summer; great people, great trails and a truly awesome place to be. 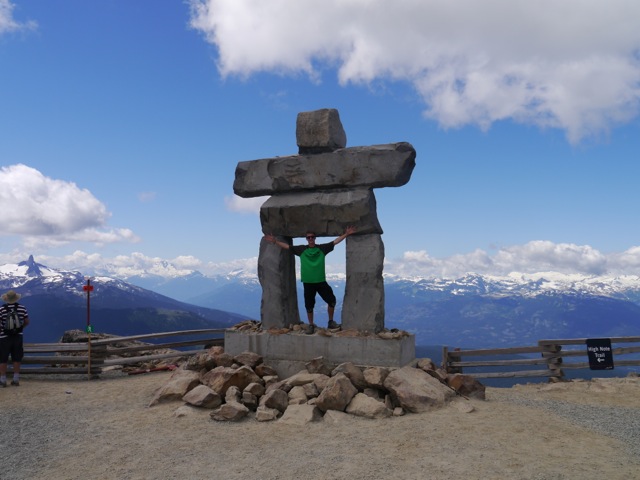 How much did your riding improve over the summer?

Much more than I had expected. The coaching on the course helped to get you to analyse your own riding, and recognise the things you needed to work on, which helped me progress a lot. Especially as I was not that comfortable at getting air time when I started, but left feeling at home on some of the big jumps trails like A-Line and pro lines such as Dwayne Johnson, as well as giving other people jump lessons!

Do you have plans to work at Whistler Bike Park again? If not, will you be going back there to ride and catch-up with friends…….and better that time on the Downhill course?

Definitely. Provided I can get a work visa, I will be heading out a bit later in June next year. I loved the job so much, and it would be awesome to spend another few months there with the friends I made this summer. Failing to get a visa I’ll still be heading out for a few weeks to catch up with my mates and have a crack at Garbanzo DH trying get that sub 15 minute time during Crankworx for sure… 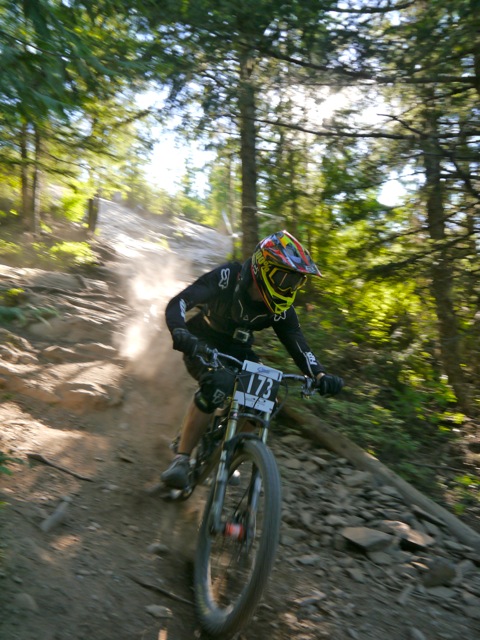 John putting in a ‘sterling’ performance at Crankworx despite technical difficulties

What would you say to anybody who is considering enrolling in the Whistler Bike Park Academy?

Firstly, make sure you get your visa! When I applied for mine the online system was rubbish, so check the website religiously during February and March to make sure you can get an application. And on that note make sure you triple check your details on the application (one mistake in mine meant I couldn’t submit it for 3 weeks!).

Secondly, try and be in good shape when you out. The fitness guide that I got with my Peak Leaders course pack was very helpful and getting my body prepared for the summer, but don’t worry about it too much as you will get A LOT fitter whilst you are out there. Good idea to get a medical/dental check before you go out as well. I had to go see a dentist whilst I was out there which was very costly, and although I had insurance it didn’t quite cover the expense. I would recommend STA Travel insurance. Make sure you look after yourself whilst you are there and be sensible about your progression out riding. Having a crash and getting injured really sucks, especially when you see all your friends go out shredding and you are stuck at home nursing your broken bones and lost skin..

Thirdly, be prepared for an intense three weeks. But if you work hard and get stuck in you’ll have no problem passing.

Fourthly, once you have landed the job, send around some e-mails to some bike related companies about free stuff and discounts. They really like to see their products getting promoted which you can help with. I heard back from Chromag, Clif Bars, 100% Eyewear and Knolly!

Last of all…..just enjoy it! I had a really fantastic experience this summer; it is probably one of the best jobs in the world.

Now you’re back in the UK and you’ve had a chance to reflect on your summer…….would you have done it any differently?

Not breaking my wrist 3 weeks before I came home would definitely be a starting point. But to be honest I don’t think I would change a thing. The whole experience was even better than I thought it would be, not sure I can use any superlatives that would sum it up!

Just want to give a shout out to all the guys at Peak Leaders, Tom E, Lorna, Tom D, and all the coaches at Whistler Blackcom: Mike, Javi, Duncan and Tom Radke my supervisor. They all ran an awesome course and made sure we got help whenever we needed it! 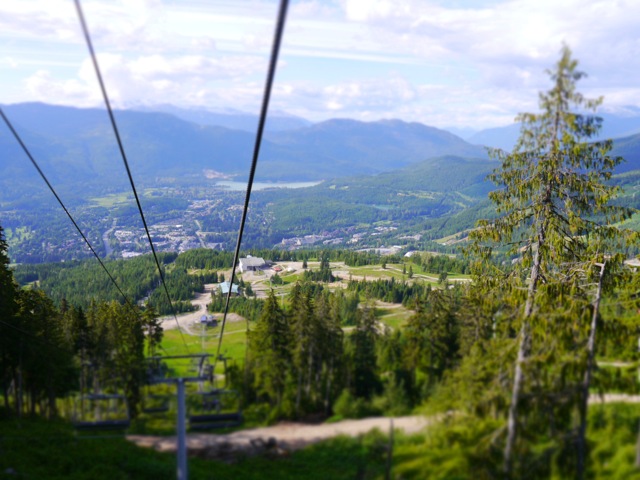