Week 6 began with a bang… After a number of painstaking practice weeks a few of the hairier, more ‘manly’, members of the crew have turned their dedication to a different kind of sport, and have decided to start the Movember challenge for real.

Back to skiing and snowboarding……Part of the BASI level 2 qualification requires the trainees to shadow some lessons, shadowing means following a qualified instructor around and learning from them. As it’s still the autumn and there are very few tourists around the group have been privileged to shadow renowned race coaches training the Kandahar race club. This was a great experience for the trainees who were lucky to be shadowing ex GB team racers coaching and getting the chance of a lifetime to race through the gates! This is something that trainer Emma has a real passion for.

Snow conditions have been amazing over the past couple of weeks

As Marco, our freestyle wizard, loved coaching the Peak Leaders trainees so much he stayed on last week and took Loz’s group of trainees to the giant snowpark on the glacier. A couple of guys having never done any freestyle before quickly nailed some 360s over the jumps and even managed some slides on the rainbow rails … hats off to them!

Nothing like a small crevasse in a halfpipe wall to keep you on your toes.

After 5 weeks in Saas Fee some of the team finally got around to one of the biggest challenges that a seasonaire has to deal with……..…washing their clothes! Unfortunately some of the ‘undergarments’ went walkabout, which lead to some crazy antics, obviously all of the culprits in this debacle were the boys!

During the middle of the week the guys and girls were handed their limited edition Peak Leaders T-shirts. As you can imagine there was a serious fashion crisis at dinner that night, as every member of the group turned-up wearing their PL T-shirt. In fairness this was probably due to the trainees running out of clean clothes to wear. From the look on their faces you could have been fooled into thinking that Christmas had arrived early.

The weekend began with James’ ILM snowboard lesson challenge, which was teaching the skiers how to board. The six snowboard novices sprinted up to the glacier eager to be taught by James and his pro team. The skiers took to snowboarding like ducks to water, being able to relate their ski knowledge to sliding about on trays! It was a real eye opener to the skiers who were able to experience how future clients will feel … a unique learning experience in becoming a great teacher. 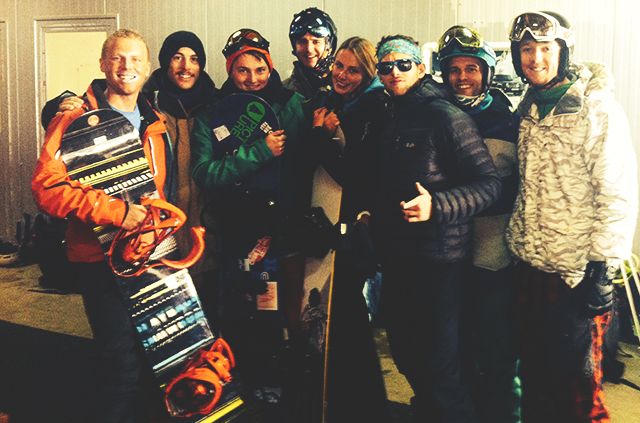 The skiers getting ready to join the ‘Dark Side’

Skiers not pulling off the snowboard look!

The social event of this week’s calendar was Halloween. However this fell on a school night (Thursday) but as the Saas Fee team are such elite sportsman it was decided to delay the party until Saturday evening when we would celebrate in true seasonaire style. That night the ‘Peak Leaders Aerobics Team’ ventured out to play…with most members dressed in stylish tight lycra entertaining all the locals who, along with Emma, couldn’t work out what style of dancing was taking place.

Another amazing week down, two more training weeks to go and the Level 2 is looming, exciting stuff! The guys and girls are nearly fully qualified ski instructors …