Wow! What a week, what a place, and what a cool bunch of trainees we’ve got on our 11-week instructor course this year. If you’ve never been to Banff I can reassure you it’s definitely worth a visit, and it’s surprisingly easy and affordable to get to. Calgary, Alberta’s largest city, is an 8 1/2 hour flight from London and return flights with airlines like Air Transat can be purchased for under £500. Banff is just a 90-minute transfer from Alberta, up the Bow River Valley and into the Canadian Rockies. It’s a beautiful drive once you leave the sprawling suburbs of Calgary, the Rockies are majestic with  beautiful pine forests, icy rivers and steep rocky mountains (surprisingly). 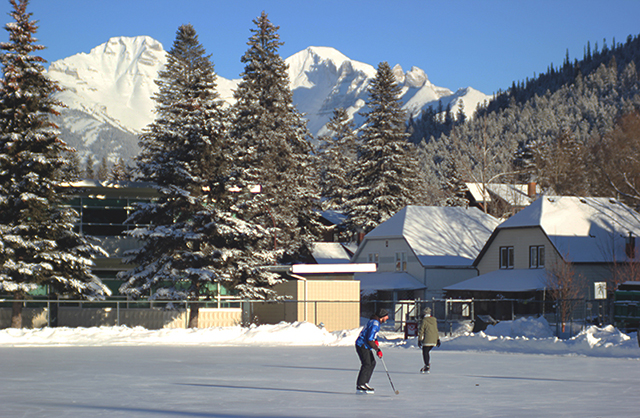 This is what Canadian’s do when it’s -30 outside

The majority of trainees arrived on Saturday, fortunately they weren’t too tired and weary from their travels. After a meal from the hotel Lounge Bar the trainees decanted their bags into their hotel rooms and got some sleep. For the duration of the course we’ll be staying at the Rundlestone Lodge. The Rundlestone is a fantastic hotel on Banff Avenue, the main road in and out of town, it has: a swimming pool, hot tub, gym, amazing Steak restaurant and Lounge Bar. The rooms are huge with: King Size beds, 40″ Plasma TV’s, cable, fridges, tea and coffee-making facilities and access to the hotels huge DVD library (which to the delight of Sam includes Austin Powers). To sum it up the guys and girls are living the dream for the next 3 months!

Our trainees are living like Kings for the next three months

The first Sunday in resort was another very chilled affair. The team had a walk around town and were shown all of the important shops and bars that would keep them entertained and in phone credit for the duration of the course. Despite it being pretty cold outside (-15) Henry decided that not wearing socks with his skate shoes would be a good idea……needless to say he hasn’t made that mistake again! Sunday was also a chance for the guys and girls to buy any necessary equipment and to meet the team at the hotel. 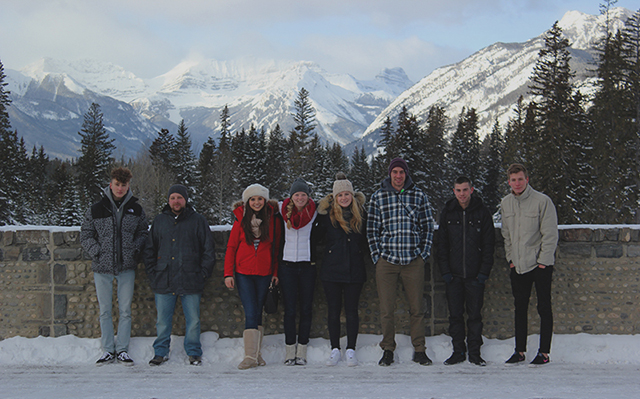 As if by magic the guys were welcomed on Monday morning by a healthy dump of fresh snow. After a hearty breakfast (the breakfasts at this place are huge!) we jumped on the 8.22am bus up to Sunshine Village. Sunshine Village is the second closest resort to the centre of Banff, after Norquay, and the bus ride takes about 20 minutes once the bus has made its last stop in Banff. Lake Louise, which is much further down the highway, takes about 50 minutes on the bus from Banff. Once at Sunshine Village the guys collected their season lift passes and their season-long bus passes and we all headed up the mountain to meet trainers Kenji and Jesse. Kenji and Jesse have been working at Sunshine Village for many years and are very experienced instructor trainers, this course will be Kenji’s ninth winter season training the Peak Leaders group……..and we can honestly say we wouldn’t want any other trainer for the job! The day was spent cruising Sunshine’s powder laden slopes and having fun, it was clear that both Kenji and Jesse wanted the guys and girls to get their skiing/boarding legs back and really enjoy themselves. Here’s a video blog of the first day:

Training for the rest of the week was fairly intense but all of the trainees really enjoyed themselves and couldn’t believe the amazing quality of the snow. It’s fair to say that they were all pretty tired at the end of each day but the hotel swimming pool and huge dinners definitely helped raise energy levels for the next day. In the middle of the week we had the first of our weekly pub quizzes: James and Oscar cleared up with a fairly respectable score  but Leo and Henry are definitely in need of an intense Wikipedia session before the next quiz! 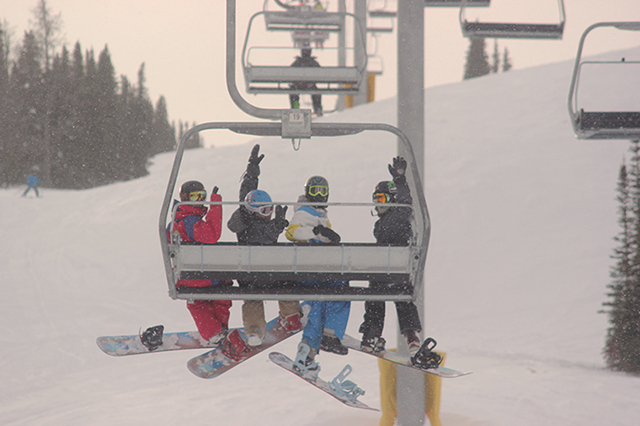 Jesse and the snowboarders enjoying the amazing snow conditions

This week training finished on Thursday afternoon so in true seasonaire style we hit the town on Thursday night. After a couple of drinks at the hotel bar we made our way to the Magpie & Stump, one of Banff’s authentic Canadian bars, where we drank Margarita’s…..not a particularly authentic Canadian drink but tasty nonetheless. After a few Margarita’s we made our way to Hoodoo which is one of Banff’s most popular nightclubs. Although we weren’t on quite the same level as the rest of the club’s patrons we tried our best to dance and Oscar even tried some twerking but was booty blocked.

On Friday the trainees spent the day taking a First Aid course which introduced them to basics/necessities of First Aid. This is something that isn’t an obligatory part of completing the CASI/CSIA assessments but we think is an important part of being an instructor. All of the trainees really enjoyed  the day and it was a good opportunity for them to rest their legs. That night we all went out to a local Pizzeria, where we were all persuaded by the waitress to put honey on our Pizza’s…..which worked a treat! After devouring our Pizza’s we made our way to the local Cinema where we watched the new Leonardo Di Caprio film ‘The Wolf of Wall Street’, which is an absolute blinder (not literally).

The weekend was free for the guys and girls to catch up on their sleep, chill-out if they wanted to, or to go skiing/snowboarding if their legs could take it. All of the guys went up to the resort and as well as having fun blasting around the mountain they all worked on the tips and instruction that Kenji and Jesse had given them during the week. 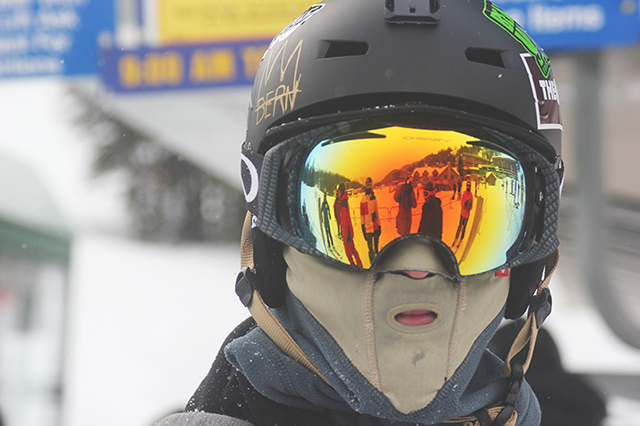 As if all of that exercise wasn’t enough course Iron-Woman Johanna, who has been going on regular runs around Banff, went on a run with course leader Tom along the river and up to the Banff Springs Hotel, and then proceeded to spend an hour in the gym…….what a machine. Since that run Tom’s been walking like an old man.

Following a fairly relaxed weekend Sunday evening was a good opportunity for the trainees to let off some steam. Sunday’s in Banff are legendary and seem to be the nights when every seasonaire hits the town and proceeds to drink their own weight in Jagermeister. The trainees night started with Elise and Izzy spending a good couple of hours getting dressed up, then a gathering in one of the hotel rooms with DJ Blades (aka Oscar) spinning some seriously dodgy tunes on his laptop. Once Oscar’s laptop had thankfully run out of battery power the team headed for the Dancing Sasquatch where the girls and Oscar danced the night away……and poor old Henry spent most of his time in the queue outside.

Kenji is a Ninja on a pair of skis

According to Sam this is the fastest gondola in the World…. 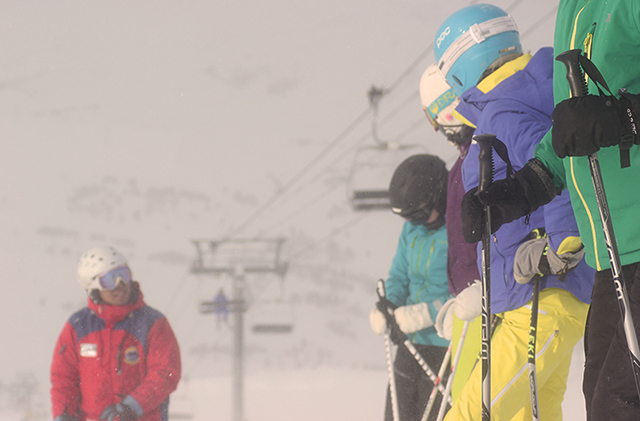 Kenji teaching his group in the heavy snowfall