On this year’s Morzine instructor course we have a broad range of accents in the group, with people travelling from all parts of the globe! Evgeniy from Mother Russia, Charlie from the US of A, Jack and Henry representing wee bonnie Scotland, Rhydian from Wales (not the white-haired chap from X-Factor), then both Jamie’s, both Alex’s, Mac, Jez and Mark all flying the flag for England. Oh and we can’t forget Darragh our course leader from Dublin.

Things got off to a great start with the crew settling in to Peak Leader’s new accommodation right in the centre of Morzine. Being right in the centre of town our apartments are next to all of the best cafes, bars and restaurants, plus the trainees have the added bonus of living next to the supermarket which has made life very easy for the new trainees on their days off training.

The view from the Peak Leaders penthouse

In fairness all of the guys had a massive first week, showing them all what it really takes to be a trainee ski or snowboard instructor. After arriving on Sunday the 5th of January the guys hardly had a chance to catch their breath before they began training the day after. Fortunately the guys got a chance to meet their instructors for the season on Sunday night and were given all of the information on what’s to be expected over the next 10 weeks.

Tammy from Mint Snowboard School was on hand to look after all the boarders and she booked the lads in with one of her top coaches Lewis Sonvico for the first week. Lewis is a well-respected freestyle coach and BASI trainer who is a bit handy in the park.

Lewis and the snowboarders enjoying their first day on the hill

The skiers were also on to a winner getting to meet Jaz and his team from the British Alpine Ski School (BASS). The BASS crew impressed the skiers right from the start with a very informative, professional and friendly brief. 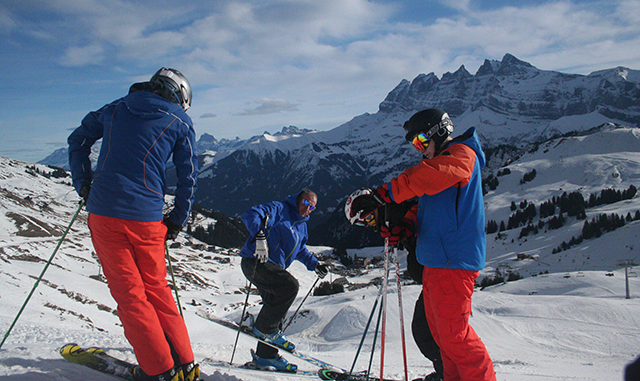 With just a week before the start if the BASI level 1 the trainees rose to the challenge of getting their skiing or snowboarding to the level required. Living in one of the world’s largest resorts has meant the team has had to be fit and able to ride all sorts of terrain. In the first week we’ve had mixed snow conditions with the weather throwing in some rather interesting days: overcoming ice, wind, rain and snow all in the same day. Many of the guys spent the first week being shown drills and exercises that they had never attempted before. The snowboarders managed to find some powder on day one with Lewis, which was a real treat. Many of the guys struggled to stay on their feet from laughing too hard and due to the front of their board’s submarining under the surprisingly deep snow. The skiers spent the week training all over the Portes Du Soleil with legendary BASI trainer Andy Jerram from BASS, needless to say they were all blown away with the improvements they made to their technical skiing. At the end of the week the trainees also spent the day learning how to use Avalanche Safety equipment and leant a little about how to make safe decisions in the backcountry……with such unstable snow conditions in the Alps this year this knowledge is invaluable.

On top of all this training the guys have also had some fun away from the mountain, with some great nights out sampling the local Apres, going for a dip at the local health center, and going on a group trip to support Morzine and Avoriaz’s famous Ice Hockey team. Basi  level 1 is now underway for both the skiers and snowboarders. After speaking with the crew and their trainers everything is on-course for a successful week…….fingers crossed! 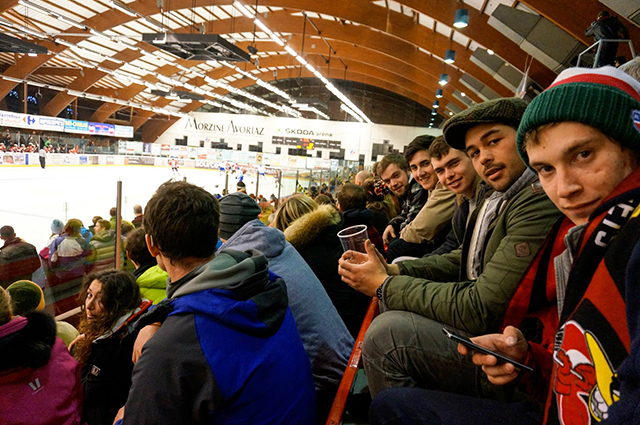 Although it’s not the NHL the Penguins still draw a crowd! 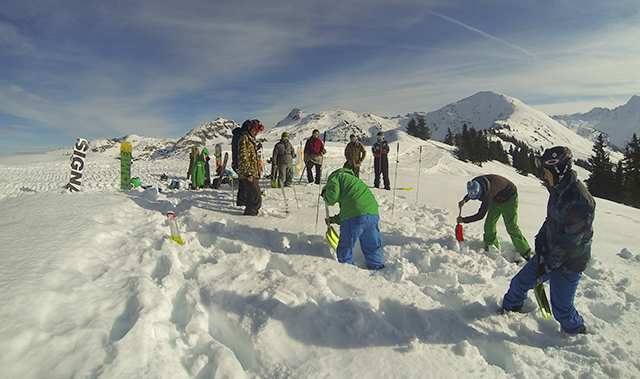 You can never be too safe on the mountain, especially this season.

*Henry having to wear the Penguin helmet-cover all day on his birthday (also day one of Basi level 1). He definitely got a few strange looks!

*Avalanche training course with David from Mint and getting to use loads of cool new Avalanche Safety equipment!

*Alex accidently breaking one of the button lifts by derailing the cable…….the situation escalated when a crazed French repair technician arrived on the scene!

*Emma (Jeremy’s wife) putting up with all the boys at dinner.

*There is a faint smell emanating from room number 10. I have never experienced Ski/Snowboard boots this bad! You know who you are!