Week four of the course marked Christmas week in Verbier! The week began with the trainees first opportunity to shadow the European Snowsport Team. For the guys and girls this involved shadowing the instructors responsible for ES’ most important clients, children. Shadowing sounds like a tactic a Ninja might employ but it is simply the act of following and watching a certified instructor without any real involvement in the class. This is very useful for trainees as they can pick-up different teaching techniques and useful tips from experienced instructors that they wouldn’t pick-up during their BASI examination. All trainees have to complete a minimum of 70 hours shadowing before they can participate in the BASI level 2 exam.

Anyway, throughout the week each trainee paired up with a number of certified Ski Instructors that were teaching kids to ski. Each day the trainees swapped the instructor that they shadowed, this was so that they could shadow different instructors teaching kids with different levels of ability: from a first time 3-year-old to the tiny helmet clad kids you see fearlessly snaking down a steep slope behind an instructor. Much to the amusement of Emma, Kaspar and the team at ES the job of shadowing also included a different trainee wearing the Penguin mascot outfit each day. The mascot suit proved surprisingly popular with the trainees, especially as the temperatures started to drop later in the week!

During the week there were a number of days that gave everyone an excuse to celebrate, not just Christmas Day. First off it was Holly’s birthday on the 23rd of December. You should never guess a girls age, but that didn’t stop the group from trying. In the end they settled on any age between the ages of 6 and 29…….wow they’re good! On Christmas Eve Andras celebrated his 30th birthday, although we’re not too sure he’s 30 because he seems as young, carefree and ‘flirty’ as the other trainees. Needless to say we ate a lot of cake that evening due to mutliple group members purchasing cakes as a surprise, but without telling the others in the group. 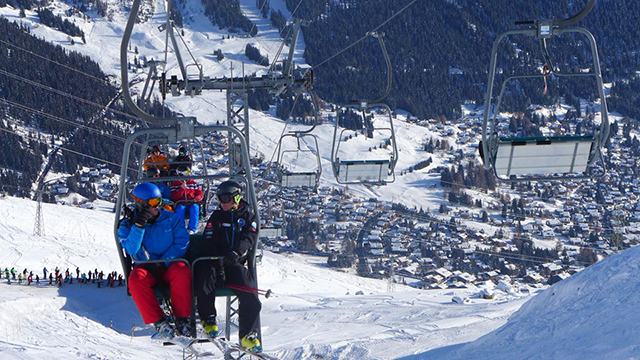 Christmas dinner took place in the Chalet where Holly, our fantastic Chalet girl, cooked-up a huge turkey and all the trimmings, which kept the group in snacks for the following week. Berti had the honour of cutting the bird, but the groups focus wasn’t on the giant bird in the middle of the table but the waiting Secret Santa gifts. The gifts this year were random, to say the least, one gift was toilet paper which provided a few laughs…..and puns.  After dinner the whole group all headed to Midnight Mass in the local chapel. After the service it was time to hit the local bars, a very Christian tradition, to celebrate Christmas a little longer.

The largest Christmas gift for everyone arrived on the 26th…..lots and lots of fresh powder! The much-needed snow finally arrived and covered the whole resort in half a meter of fluffy powder. The week ended-up with an intense power-yoga session which got the team ready for the coming week of shadowing and training and helped the pain in some aching backs to subside……..an unfortunate side-effect of picking kids up off the floor all week! 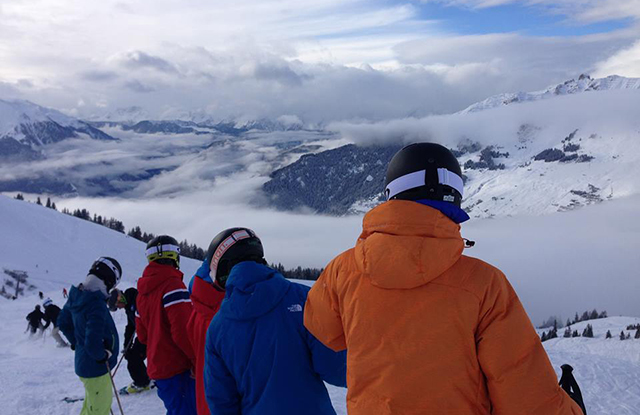 Welcome to my life!