New Year’s week always brings thousands of wealthy holiday makers to Verbier’s pristine pistes, many of whom are in need of a lesson or three, which allows our trainee instructors to do their second slice of shadowing. In addition to a full morning of shadowing our trainee ski instructors have been busy training in the afternoons, which means they’re on the mountain for the whole day. The Trainer for the start of the New Year was Nick whose goal was to push the trainees’ technical ability to ski variable terrain. As a consequence the guys and girls skied a lot of bumps this week, which was not everyone’s idea of fun! Undaunted Nick slowly worked his magic and by the end of the week everybody’s mogul-skills had improved dramatically. With yet another dump of fresh powder came some very happy, smiling faces……there’s nothing like skiing in knee-deep powder to clear the mind and put a smile on your face. The nice and gentle ‘Christmas Tree Run’ caused it’s fair share of hooting and hollering with some highly entertaining nose plants from nearly everyone. A special mention must go to Andras and Max who did some spectacular face-first landings!

Another hard day in the office..

Despite all of that amazing snow the focus of the week had to be Tuesday night…….New Year’s Eve. Which isn’t surprising when you consider Verbier is as well known for its nightlife as it is for skiing and snowboarding. After a good ‘warm up’ party in the Chalet the plan was to hit ‘Place Central’ where what seems like the entire population of Switzerland meets to welcome in 2014, with lots of Champagne and Fireworks. There’s only one word that can accurately describe the party at Place Central and that is ‘INSANE’.

At this point the party is just getting started

Anyway, back to the Champagne: while on a shopping tour of the town for New Year’s Eve the trainees thought they’d purchase some Champagne to welcome in the New Year. Unfortunately the combination of a difficult foreign language and Swiss law meant that the trainees, who thought they had purchased Champagne from Migros (a Swiss Supermarket), had actually purchased something a little different. Unfortunately for our frugal trainees Migros doesn’t sell Champagne, in fact it doesn’t even sell alcohol. On closer inspection this bargain Champagne turned out to be Children’s birthday Champagne (yes even the kids have expensive taste in this town!). Nevertheless the trainees’ alcohol-free Champagne served well as a ‘mobile foam machine’ in the street party that ensued……and it definitely generated a few laughs!

New Year morning was bitter pill to swallow, bleary eyed and exhausted the trainees went about their shadowing. You had to feel for the trainees lumbered with the younger less-experienced beginners who constantly needed picking up off the ground. Nevertheless, all of the trainees showed amazing professionalism and resolution: all managed to arrive at their lesson on time and keep a ‘poker face’ during the day

The following day involved the trainees’ first trip to neighbouring ski area ‘Bruson’ (or Brucey Bonus as it’s known by the locals) and a visit to Savoleyers. The slopes were amazingly calm and peaceful, which was welcome respite from the holiday madness and the trainees experienced their first romantic double T-bar ride. After a great week everyone is looking forward to the coming week as most of the tourists will have gone home and we can expect empty pistes and clear heads! 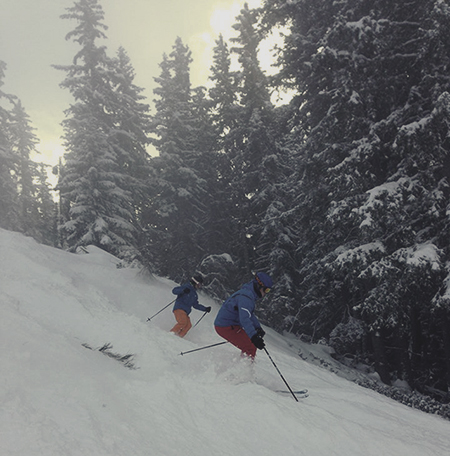