Week 5 in Banff was the busiest week for our intrepid trainee ski and snowboard instructors since the start of the course.  The beginning of the week marked the start of the CSIA/CASI level 1 assessment for the trainees, so understandably they were all very quiet at breakfast on Monday morning.  Although course leader Tom and trainers Jesse and Kenji were quietly confident about the level of the guy’s skiing and snowboarding it all depended on whether they could hold their nerves……..which was definitely a struggle for poor old Sam!

As there are a number of other instructor programmes with trainees taking the level 1 assessment, and members of the public, our guys and girls were split up into a number of groups. This made a nice change for everybody and gave them an opportunity to socialise with different people. Despite a nervous few days everybody really enjoyed the assessment and focused very hard on making the changes that their CSIA/CASI examiners wanted to see. By the time Wednesday afternoon came around some of the trainees were quietly confident but some were definitely ‘bricking it’. It’s fair to say that both Elise and Sam had very concerned faces all day long, but that anxiety and apprehension soon turned into pure joy. Much to the delight of the trainees and their trainers, Kenji and Jesse, everybody passed the assessment! That night the drinks certainly flowed as the trainees headed to the Dancing Sasquatch to party the night away with their fellow newly qualified instructors. 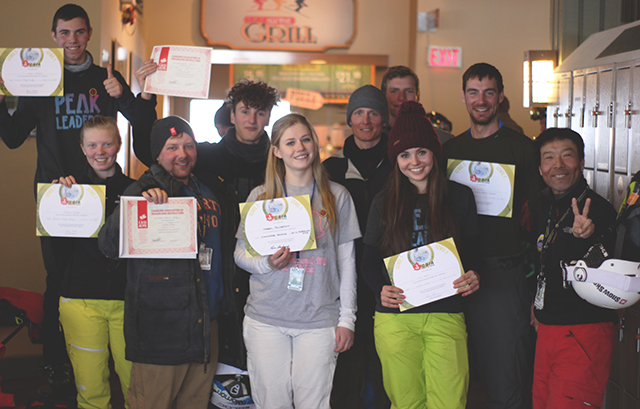 Unsurprisingly Thursday was not the most productive of days, with only one trainee making it down to breakfast. Well done James! After catching-up on some much needed R&R and sleep, and regularly checking the snow report, Friday morning came around very quickly, which meant one thing…….CAT-SKIING!!

Friday morning meant an early morning rise for everybody. We were all sat on a small bus heading to Fortress Mountain by 6:30am. Fortress Mountain is an old ski resort that has been deserted for the last 10 years. In recent years, thanks to some substantial investment from film companies, a company called K-POW has been able to start a Cat-Skiing operation at the resort. The snow scenes from the films ‘Inception’ and ‘Bourne Reality’ were filmed at this resort and the guides were quite happy to tell us a few tales of filming mishaps and Diva-esq actors.

Nobody else for miles and miles, and all that powder just for us!

The whole day up at Fortress was amazing and we were very lucky to be skiing and boarding there just after a fresh dump of snow. On most of the slopes that we rode the snow was a couple of feet deep, but in places it was at least twice that depth. The terrain itself was really good fun, nothing too steep and dangerous, but plenty of trees to ski between and lots of features to jump off. All in all it was a pretty perfect day and all of the trainees had been completely converted to freeriders!

Following such a busy week the weekend was a very relaxed affair. Most of the trainees went up to Sunshine Village on either Saturday or Sunday to make the most of the amazing snow, but nobody went up on both days and when they did get up to the resort they all took it fairly easy. Nevertheless on Saturday evening Tom, James, Sam, Leo and Henry headed up to Mount Norquay to do some night skiing/riding. Every Friday and Saturday night Norquay floodlight the terrain park and a couple of wide-open pistes. This was a perfect opportunity for the snowboarders to try their hand at some bigger, more technical features. It was fantastic to see the snowboarders really step up their game, despite some very questionable lighting. It’s fair to say that Saturday night was a real ‘progression session’.

Another amazing week down, which means that the trainees are almost half way through the course…….sad times. If you have a few spare minutes watch the most recent video blog, below, which pretty-much summarises everything you’ve just read in beautiful 720p HD.