After the excitement of the previous week, week six was an opportunity for the trainees to get back into their training schedule and let their minds and bodies recover. The week began with the AST level 1 course: this is an introduction to avalanche safety and gives trainees an understanding of how to use avalanche safety equipment (transceivers, probes & shovels) and how to make better decisions when skiing or snowboarding off-piste. With so much snow falling over the previous weekend there couldn’t have been a more fitting time to run the course.

Day one started with a fair bit of theory. Mountain Safety expert and Sunshine Village team member Martin spent the morning talking about the different causes, risks and types of avalanches. With a strong understanding of what conditions and circumstances lead to Avalanches the trainees should in the future be able to make better decisions about skiing or snowboard off-piste. After a morning of theory the trainees were ready to hit the mountain. In the afternoon the trainees surveyed the mountains around the resort looking at slopes and building-up an understanding of how to calculate risk and spot hazards.  To finish the day the trainees tried using a transceiver, probe and shovel. As all of the transceivers that the trainees were using were digital it didn’t take a great deal of practice before they got the hang of pinpointing a burial………it was the probing and shoveling which everybody found a little harder. Elise was adamant that she’d be “no good” in avalanche situation because she can’t shovel, so if you ever go off-piste skiing with Elise make-sure she goes down the slope first!

The second day of the AST level 1 was fairly similar except this time the trainees were tested with a simulated ‘real life’ scenario. They spent the morning practicing their transceiver, probe and shovel skills then were tested before the lunch break with a multiple burial scenario. Well done to everyone, especially Henry, Leo, Oscar and Johanna who ‘saved’ both of the buried rucksacks within 6-minutes. In the afternoon the trainees got to follow Sunshine Village Mountain Patrol member Kevin around some of Sunshine Village’s off-piste areas, by all accounts Kevin “was a bit good on a pair of skis”.

Following the AST level 1 the trainees got back into training with Kenji and Jesse. Unfortunately temperatures fell again and the trainees, who were pretty exhausted from a very busy schedule over the past few weeks, started to pick up the dreaded lurgy and get a few aches and pains. So, those that could train trained, and those that needed to take a day or two off training were given that luxury. Nevertheless the lurgy and cold temperatures didn’t stop the Pub Quiz, which is actually more of a trivia night as it seldom involves the consumption of alcohol. Once again James bought home the bacon and the trainees were introduced to some new music. Even Elise, who is a self-proclaimed lover of bad music, showed an appreciation for M83 and Major Lazer in the ‘guess that tune’ round.

This is normally a river…..that’s how cold it is here!

The weekend was a fairly casual affair for the skiers, with the exception of James, as they rested their weary limbs and boiled themselves in the newly renovated hot tub. The snowboarders on the other hand spent Saturday building and sessioning their first backcountry kicker, which was just a 5-minute walk from the top of the Wawa lift. With the help of James and course leader Tom they created a fairly sizeable jump, which definitely grabbed the attention of a few passers by. As a lot of fresh snow had fallen over the past few days the landing was really deep, so the trainees donned their helmets and went about trying some new tricks. After just a few runs the guys were trying backflips and although they took a few tumbles both Sam and Leo got pretty close to landing one. In fact Leo was so close that it’s fair to say he snatched defeat from the jaws of victory at the very last moment and butt-checked his landing. Henry on the other hand was in his own world inventing some new tricks that no one, not even the Ski Aerialists at the Olympics, had ever seen before! Although there was a lot of shoveling and hiking involved all of the snowboarders agreed that it was one of their favourite days of the course and they can’t wait to build another when it snows heavily again. (Sorry about the quality of the photos, they’re screen grabs from video footage)

Leo tweaking out a nice Wildcat 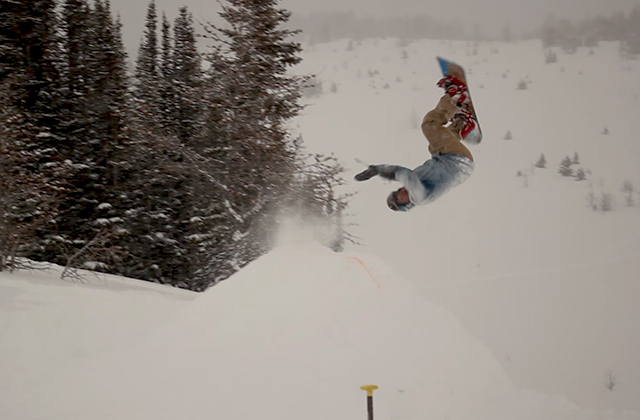 Sam’s down with getting upside down

Sunday was bitterly cold so the vast majority of trainees decided against going skiing or snowboarding.  Obviously Oscar ordered a few Pizzas and enjoyed another Soprano’s Omnibus. In the evening however a few of the trainees and new recruit Archie headed to the outdoor Ice Skating rink to embrace their inner ‘Torvil & Dean’. Unsurprisingly our Swedish wonder girl, Johanna, was completely at home on a pair of skates, managing to glide effortlessly across the ice. Elise was also a dab hand (or foot) and those lessons that she confessed to taking in the past definitely helped both her and Johanna show the boys up. It was only Archie, who took a few spectacular slams, that could keep up with the girls……..but in fairness he definitely didn’t look like he was in control. Ice Skating was great fun but after 20-minutes of skating around in -23 centigrade we were all ready to head home for dinner. Wow these Canadians are tough nuts! 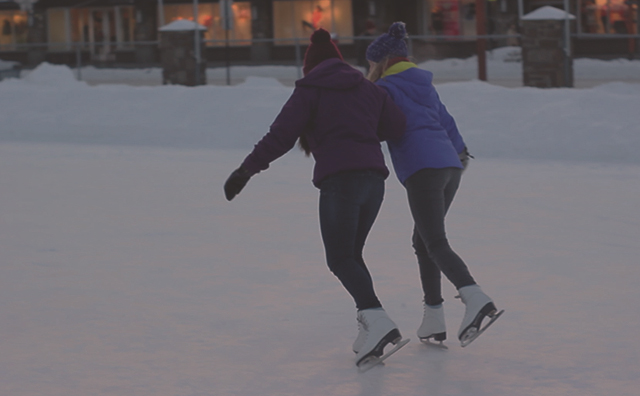 Elise and Johanna….Great Sweden’s next entrants to the Winter Olympics