After spending last week on the mountain it’s fair to say we’re all questioning the waterproof quality of our outerwear. With such amazing conditions all season it was time for us to be subjected to some of the weather that all our friends and family in the UK and Ireland have been getting. The resort was buzzing with energy with an anticipation of something big was going to happen. With a serious weather system on the horizon our trainees, in true form, were up for the challenge. Although it’s fair to say I don’t think that their jackets were! It’s fair to say that the weather was Apocalyptic, like something out of the movies. Our motto for the week swiftly became “if it ain’t raining it ain’t training!”. 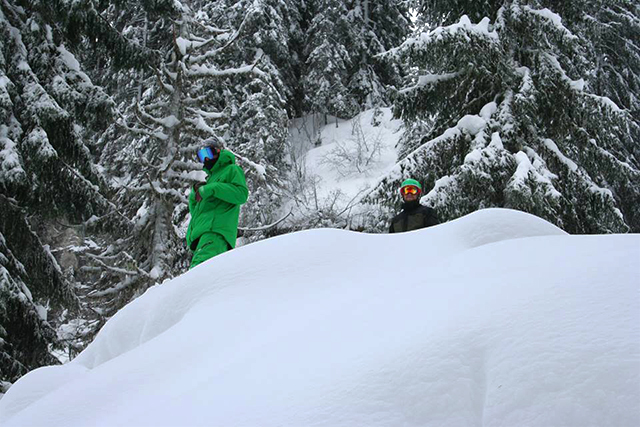 Fortunately the rain has left a little bit of snow in it’s wake!

Over the course of the week we encountered winds strong enough that the trainees literally had to crawl over some hilltops to be able to snowboard down the other sides. It also rained heavily for two days solid, but despite that the guys, like real troopers, continued training. Have you ever experienced a lightning strike on a gondola? We have! Eventually the rain turned the lower slopes into spring-like riding conditions and some new tricks were thrown in these soft conditions, but as the week progressed thankfully the rain turned into heavy powder once again. The Portes Du Soleil is always full of surprises but despite some crazy weather the conditions the snow keeps falling, which is adding up to be a bumper season! Finally on Sunday the sun came back out to play.

Definitely worth the wait.

When they weren’t busy training the group shadowed the BASS and Mint instructors and really got to see what they were made of. Teaching a lesson when the weather is completely against you, while keeping clients safe and having lots of fun, is definitely a skill. In fairness they do all have amazing Gore-Tex jackets, which definitely helps!

Last week could definitely be referred to as ‘family week’ due to a few of the crew having visits from family members (sounds a bit like Prison). It was great to hear feedback from their families on how the guy’s snowboarding and skiing had progressed over the past six weeks. A real confidence boost for the guys who now have less than two weeks until the start of their BASI level 2! As with any family the sibling rivalry soon kicked in and we definitely had a few disgruntled brothers and sisters who were a little upset that there brother was now a much a better skier or snowboarder……there was definitely some good ol’ family banter.

With such a hectic week of training and shadowing there was a bit more downtime in the evenings. Fortunately the Winter Olympics was on the TV nonstop and the group got really into watching it and supporting their fellow countrymen. As with the previous week the group also headed to the Mountain Rehab Pilates sessions for some R&R. It cannot be stressed enough how important it is to look after your body and thanks to Georgie, our Pilates instructor, the guys are feeling loose and nimble. She never goes easy on us! 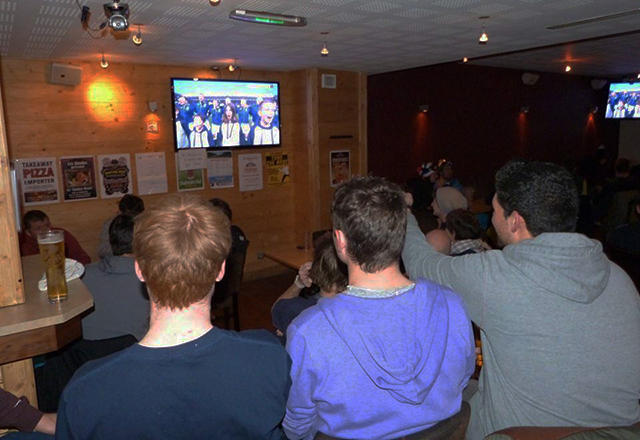 Winter Olympics and a beer…..living the dream!

Each week our group gets to eat at one of Morzine’s best restaurants for 5 nights of the week. The Clin d’Oeil has been amazing and the group are in love with the place. With a group of 12 men plus Emma (Jez’s wife) and group leader Darragh, who is a big lad, the restaurant has plenty of hungry people to look after.  True to their French roots the food is fantastic and there’s plenty to go around. They team at the restaurant are great people and are teaching our guys how real French food should taste, as well as teaching our guys a little French and learning some ‘proper’ English.

It’s Jack’s birthday next week so stay tuned for some funny stories (as always) and check out the video edit Darragh and the crew made of their day riding with Burton UK rider Ross Needham: