At the start of the week of BASI level 2 exams it’s fair to say that all of the trainees were quite nervous about what to expect during the two-week course/assessment. After an introduction from BASI trainer Alex Leaf on Sunday evening, where he talked the guys and girls through the course and distributed the BASI workbooks, it was time on Monday morning to hit the snow. The group is lucky as Alex, who is the current Alpine Director of BASI, will be training them fort he next two weeks. Alex is not only one of the nicest guys you’re ever likely to meet but a guru on a pair of skis, with a tonne of experience and knowledge to pass over to the trainees.

Although the group ascended the first lift in a nervous silence the mood was soon lightened by BASI trainer Alex, who took a couple of two completely out-of-character tumbles, which definitely put a few smiles on the trainees faces and cured them of their nerves. After building a great relationship with the trainees Alex continued the week’s training with various technical exercises to push the level of the trainees’ skiing as well as perfect their central theme demonstrations. Additionally everyone had to run two teaching sessions in front of the group on a random subject. Most of the skiing during the week took place on Savoleyres, where the runs are quieter and fit the requirement of the training and assessment perfectly. 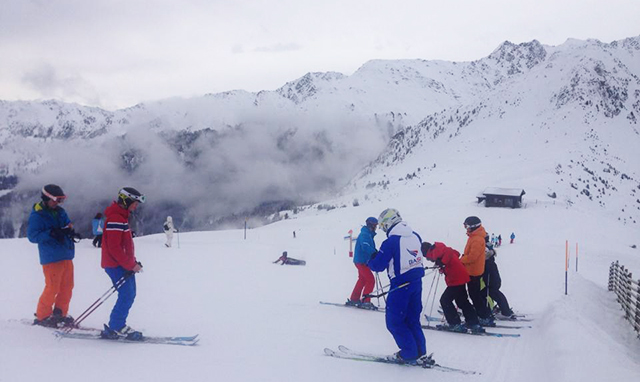 Alex and the trainees up at Savolayres

Unlike the usual training with Emma and the ES team, BASI assessments also involve lots of off-snow work and preparation. After the training each day Alex held lectures on various skiing subjects such as biomechanics, teaching technics, and more. During this week all of the trainees had to complete their online child protection module, which needs to be completed before being issued a BASI certificate. Well done to Bertie for the fastest completion ever: 5 minutes!

It’s fair to say that it was a challenging week for the trainees, but they definitely rose to the occasion, and by the end of the week they were in need of a beer….or two.  So on Friday night the group went up, by the world’s smallest snowcat, to the ‘la Marlenaz’ mountain restaurant, which is located high above the village with a great view over Verbier by night. That night the restaurant served-up three different kinds of Cheese fondue (tomato, classic, onions) to the amazement of the trainees, who were more than keen to taste these local delicacies.  After a nice filling fondue dinner it was time to sit on sledges, which we’d cunningly bought up with us, and toboggan along the purpose made track back down to Verbier. A legendary race took us all the way down to la rouge. Congratulations to the winner Max that just overtook Meg in the last turn before the finish line…….what a Gentleman!

Pimp my ride! Our lift up to the Restaurant!

The trainees spent the remainder of the weekend resting their limbs and working on what tips and constructive criticism Alex had given them during the week. The week came to a close with a Beer-Pong evening in the Chalet, together with a few guests and a chilled-out ‘Disney Movie Marathon’ on Sunday, which included classics such as ‘Beauty and the Beast’, ‘Mulan’(???) and ‘The Little Mermaid’.

There’s never a dull moment in the Peak Leaders Chalet