The final week has come to an end and we have some epic news to share: ALL TWELVE OF OUR TRAINEES PASSED THEIR BASI LEVEL 2!! It’s only our second season running the course out in Morzine and every year this place seems to be getting better.

Week 10 was a scorcher with t-shirts and sunglasses being the ‘getup’ for most of the people in resort. Fortunately the importance of applying sunscreen had finally rubbed off on the trainees, who this week managed to keep their Panda eyes from getting any worse! With prime time Spring conditions on the mountain both the skiers and snowboarders had to show huge adaptability in their riding. On the first lift up they you would have to deal with solid, icy conditions until the sun would stick it’s hat on and come out to play. The afternoon was playtime with lovely soft slushy snow allowing the skiers and boarders to relax a little and polish off any requirements from trainers James and Kev. The last few runs home were full of slushy moguls but were always a good laugh, with even some of the most experienced riders and skiers in the group having a tumble!

Not a cloud in the sky……..just BASI trainer Kev

It’s always nice to get compliments and this year we got some great feedback about the standard of training delivered by BASS and Mint from our BASI examiners. A big ‘thank you’ to Jaz and Tammy, and their team, for all of their hard work in getting our guys to the desired level! The skiers have a level 3 taster sessions after the course as it looks like they already have the skills to go much further! 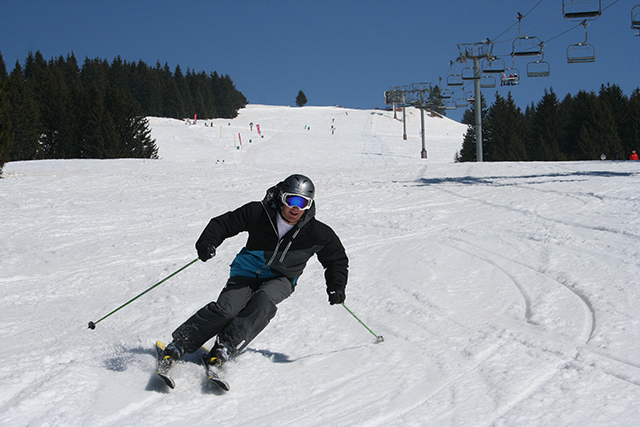 Friday was the final day of the level 2 assessment and was tense to say the least. Not one person in either group had been given any reason to believe they would pass. This is done to ensure that the exam remains consistent and the effort from each of the trainees remains 110% throughout the course.  The guys kept to their guns even as the day on the hill drew to a close.

2pm came and group leader Darragh gathered at the bottom of the final run to await the news of results.  One by one some very recognisable skiers and boarders made their way down the hill with joyful turns.  It was a fantastic sight to see someone waving their arms up and down in joy while blasting down their final run! It was an memorable scene as one by one we all gathered in a bar at the bottom of the resort in the glaring sun.  Handshakes and hugs were flying everywhere! The banter was electric and the smiles contagious! The stories began to flow and people seemed to just melt into their surroundings and for the first time in a little while ‘relax’! 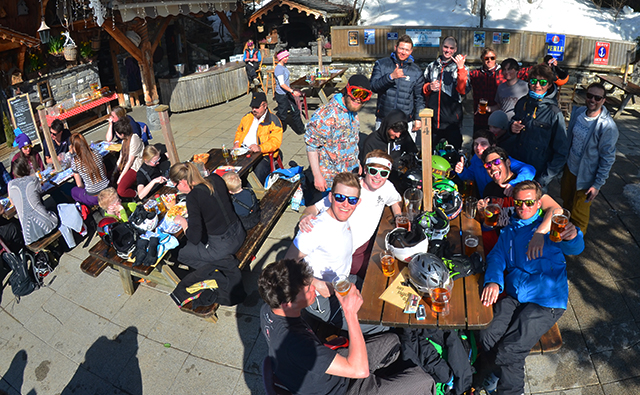 A celebratory pint of ale

After a celebratory pint a final group run was on the cards.  Skiers and snowboarders took to the piste as all 14 of us had a quick blast and a show off session to finish the course off in style!!!!! 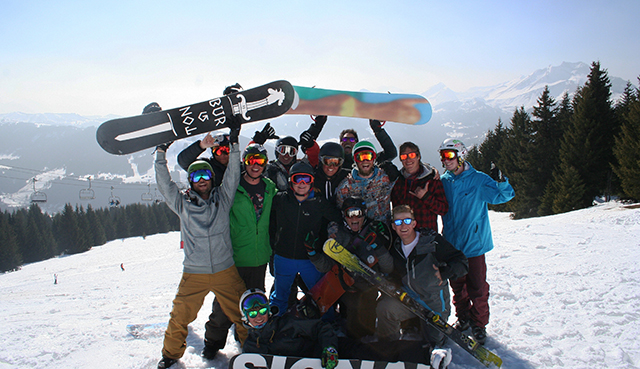 After such an amazing result a big night out was always going to be on everybody’s minds. Having such spacious apartments meant we could have our own Peak Leaders balcony party to start the night off. The beer and food was flowing and everyone was set to party the night away. The guys had a blast and there were some very funny stories to tell the next day……..but “what happens in Morzine stays in Morzine!” 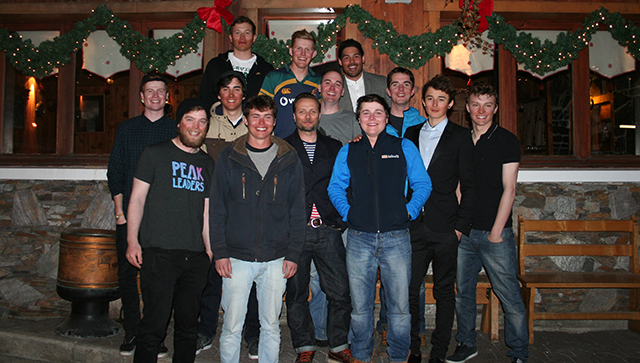 As group leader for this year I would like to thank everyone involved with the course. We have all made so many friends around Morzine this year that have made the course even better! You know who you are and hopefully we’ll see you next year.

A final note to the trainees: WELL DONE and remember your rime in Morzine. You guys have done an amazing job. With tonnes of high highs and the occasional low lows this has been a season never to forget!