The trainees in Verbier all completed their BASI level 1 assessment last week. The course started on Sunday evening with a welcome chat from Duncan, who was the trainee’s coach for the week. Duncan is a highly experienced trainer and coach who has worked as an instructor and instructor trainer all over the world, and has coached the British Ski team. During the BASI 1 the group learned a lot. Not only did their own skiing improve, but also their teaching and demonstration skills.

During the week everyone had to prepare a teaching session on a random part of the BASI central theme, the ‘central theme’ is the building blocks for teaching an absolute beginner to turn. As if that wasn’t enough, the trainees were then tasked with creating a fun ‘imaginative’ way of teaching it. Mati’s exercise of being chased by the Paparazzi lead to some serious laughter. In an effort to fine-tune the trainees’ skiing Duncan also introduced the group to synchronised skiing. This is a really good way to work on timing and mimicking movements. It’s also a great way of showing off in front of the tourists.

Friday was the last day of the assessment and came around surprisingly quickly. BASI level 1 ended with Duncan delivering the results to the trainees up on the mountain. The effort every trainee has put in over the past 3 weeks was rewarded with another 100% pass rate! Congratulation guys and girls! As a reward Duncan took everyone down a very enjoyable run called Vallon d’Arby, which was covered in plenty of powder. The great off piste conditions were a nice reward for all the hard working trainees who had spent all of their time over the past week on the pistes. Much to the amusement of the group this run also brought Duncan’s first tumble of the week, much to the amusement of the group. It turns out Duncan is human after all!

On Friday night it was time to celebrate! After a tasty Pizza dinner the party kicked off in the Chalet, with some of the early season Verbier Peak Leaders graduates rocking up. The night promised to be BIG as the BASI 1 celebrations coincided with James’s 18th birthday. So after a few drinks at the Chalet the evening continued in the Pub Mont Fort and later on everybody ended up in the Casbah. It was at the strike of midnight that James’ birthday officially started and the celebrations hit the next level. Despite a few sore heads on Saturday the trainees continued on the celebrations with Ania cooking up a storm in the kitchen and Helen organising a big chocolate cake…..what a lovely bunch!

If there’s the one thing the Swiss know how to make it’s Chocolate Cake!

When Sunday came around it was time again for everyone’s favourite activity……skiing. To make the most of the amazing conditions the group made their way to the peak of Mont Fort, the highest point of the resort. The route down is not for the faint hearted as it’s incredibly steep and the route down is littered with moguls for about 1300 vertical meters!  Later in the day the some of the guys and girls checked out the snowpark in Verbier and the others headed over to Nendaz for some more moguls. Another great week in Verbier draws to a close and all of the trainees are in need of a good night’s sleep before the training starts on Monday morning.

It’s not Chamonix……but it ain’t far off Chamonix 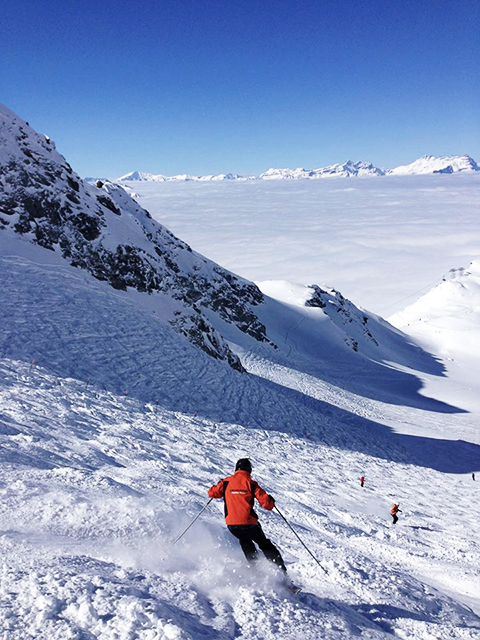 Not for the faint hearted…