So it’s all over, officially the end of an era. The last 11 weeks have flown-by for everyone out here and as the trainees move on to pastures new they’ll all remember Banff with the fondest of memories. In fairness, to say that most of the guys and girls will remember their last week in Banff with fondness would be a bit of a lie!

Despite having spent the last 3 months training specifically for the purpose of the level 2 exam and being more than ready to take the exam, nerves seemed to get the better of them. It’s fair to say that the trainee’s last week on the course was an emotional rollercoaster with most of the guys and girls allowing doubt to creep into their psyche at some stage.

The difference between Oscar’s skiing now and 11-weeks ago is HUGE!!

Fortunately throughout the week we were blessed with amazing snow conditions, it just wouldn’t stop snowing! Although it was the last week of March, and conditions back in Europe looked like they were going from slushy to muddy, it felt like Sunshine Village was experiencing some of the heaviest snowfall it had experienced all season.

For the skiers the CSIA level 2 was a 5-day course, which involved: a 1-day ‘teaching children’ elective module at the start of the course, followed by 2 days of CSIA level 2 teacher training and technical skills training. After the two days of training the last two days were an assessment, with a completely different trainer/examiner. The snowboarder’s assessment was a far simpler affair. Rather than the course being split up into elective modules, training and assessments, it was a 4-day continual assessment where the trainers worked continually on both the snowboarders riding and teaching to get it to the level required to pass. 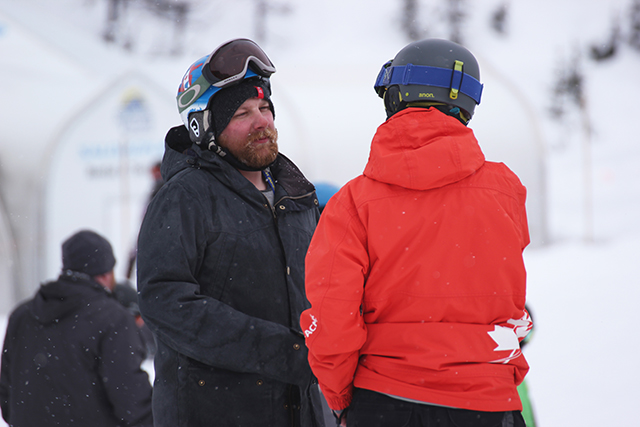 Sam getting some feedback from his CASI trainer

The last day came around and at breakfast the whole group seemed a little melancholy. Some of the trainees had small niggling issues with their technique that they had to correct for the last day and some were yet to deliver a lesson to their fellow trainees that they were truly proud of. It seemed as though none of the CSIA/CASI trainers had given any clues to the trainees about whether they were heading for a pass or fail.

If there’s one thing that you can count on it’s time (get it!). Well time marched-on and before we knew it we were all sat in the Sunshine Village Day Lodge awaiting the results. Understandably the nerves had taken an even firmer grip on the trainees and both Sam and Henry decided to calm their nerves with a cheeky lukewarm beer. The girls on the other hand decided to get a little more emotional and struggled to hold back the tears with varying degrees of success. First up were the snowboarders who all smashed the riding part of the assessment (well done lads!) and both Henry and Leo passed the teaching side of the course…..making them fully certified level 2 instructors. Congratulations guys it’s amazing to see how much your riding has improved over the past 11 weeks. Sam, who really suffered with nerves all week, was so close to picking up his full level 2 certificate but just missed a few small points on his final teach session. We were all gutted for him but know he’s going to make a fantastic instructor in the future, and when he takes the 1-day teaching reassessment he’ll pass it with flying colours (Sam took his retest a few days later and passed it with ease!) . Tonnes of charisma and a huge amount of passion for the sport mean that Sam is undoubtedly going to go really far in this profession.

After the snowboarders collected their certificates it was time for the skiers to go through the same kind of nail-biting experience. Unlike the snowboarders the results were delivered to the trainees within their small ski groups, which definitely made it easier for them. After a couple of agonising minutes all of the skiers emerged beaming with energy and excitement. The last 11-weeks had all been worth it and the last week of examinations was suddenly forgotten about, as all of the skiers were awarded their level 2 CSIA instructor qualification!!! Understandably everyone was ecstatic and Jesse and Kenji, who had been delivering results to the groups that they examined, were soon swamped by the trainees and thanked profusely.

That night everyone celebrated like there was no tomorrow. Before heading into Bannf centre we held the inaugural ‘Bin Bag Ball’ where all of the trainees attended in outfits that they had made from sticky tape and bin bags. The girls had gone to town on their outfits spending at least 2 or 3 hours sculpting gowns that wouldn’t look out of place on a red carpet. Due to the girls enthusiasm the boys were given the raw materials just a few minutes before the start of Ball. In true ‘lad’ fashion the guys created some very inventive outfits with Henry dressing as a Super Hero, Sam as Fred Flintstone, Leo as Sideshow Bob, Oscar as Gibraltarian Harry Potter, and James as a guy wearing a bin bag. Once downstairs the various prizes were handed out to the trainees, we drank a few bottles of Champagne with our guest of honour ‘Kenji’, then we headed out to town to paint the town red and drink our share of ‘Time Machines’……quite possibly the fuel that Doc Brown used to power the Delorian in ‘Back To The Future’.

It was a very trashy party…

Over the next couple of days the trainees gradually left the hotel, hugging each other goodbye, wishing one another a safe trip and promising to keep in touch. Banff 2014 has been an amazing course and I truly believe that this awesome bunch of people will stay in touch for a long time to come. I wish them every success for whatever adventure they have planned next and hope that they all use the skills that they’ve leant over the past few months to inspire other people to try skiing and snowboarding. All of them will make awesome instructors!