Where to Ski or Snowboard in May

By the end of the winter season most of us thinking about a nice warm beach in the tropics and the smell of sun tan lotion. Nevertheless there are those that love spring skiing and snowboarding conditions more than any time of the year. What’s not to love? It’s warm and sunny, the hotel prices are really cheap, the parks are shaped and the beer is flowing. We talk through our favourite spring ski resorts, and let you know where the best spots are to head to in the month of May.

First on our list is the Stubai Glacier in the Austrian Tyrol. Stubai is the largest glacier in Austria and is a popular mountain for pre-season and post-season shredding. Stubai is a 45 minute drive from Innsbruck and is open to the general public until the 4th of July.

Spring parks don’t get much better than the Stubai Zoo

Stubai also plays host to one of the best snowparks in the Alps. The Stubai Zoo is a favourite park with pro snowboarders like Shaun White, Jamie Nicholls and Marco Grillc. In the lead up to the 2014 Winter Olympics the Zoo provided riders with a huge airbag and kicker combo, which a number of Olympic hopefuls learnt triplecorks into. If you’re serious about taking your skiing or riding to new heights then there are definitely worst places to visit than Stubai. Although the park closes on the 18th of May this huge glacier has a lot of terrain to offer skiers and snowboarders of all levels, with a variety of different gradients and runs.

Over the past 20 years Hintertux has become a very popular venue for professional freestyle skiers and snowboarders, thanks to the legendary SPC Park and more recent Betterpark. Also, thanks to its steepness it is also a popular training ground for professional ski racers. The Hintertux Glacier has also become a popular venue for higher-level BASI ski and snowboard courses, with many professional instructors finishing work at their respective resort then heading to Hintertux to qualify further.

After a long day on the slopes, if you’re somebody that can embrace Austria’s rather strange Apres Ski ritual of drinking Pear Schnapps and dancing on tables to an Oompah band (Hintertux has its very own song), then you’ll be happy to hear that Hintertux has one of the wildest Apres Ski bars you’re ever likely to stumble upon/out of.  At the Sommerbergalm lift station, in what appears to be in Austria’s version of the humble yurt, is a circular bar with literally hundreds of inebriated patrons singing about why Hintertux is the best and throwing beer everywhere……despite the bad music it’s actually a lot of fun!

You’ve got to love the Austrians!

Zermatt may have a reputation for being one of Europe’s most exclusive ski resorts, but those astronomic hotel rates don’t stick around in the off-season. Surrounded by some of Switzerland’s highest peaks, including the world famous Matterhorn, Zermatt has Europe’s highest ski lift, which reaches almost 3,900m and as a result allows skiers and snowboarders to enjoy the slopes until late into the summer.

Zermatt now offers one of the best spring parks in Switzerland, the Gravity Park, which has a beautifully shaped Superpipe, a fun line of jumps for intermediate and advanced riders, and plenty of rails and other obstacles to jib. For those people that aren’t interested in the park, the first few weeks of May offer almost 1400m of vertical to play with and Zermatt’s fantastic Spring weather and rolling terrain make the resort very popular with ski tourers and splitboarders. If that amount of physical exercise isn’t your thing then you can just go for a ski and admire the amazing views of Switzerland and Italy from the top of Europe. 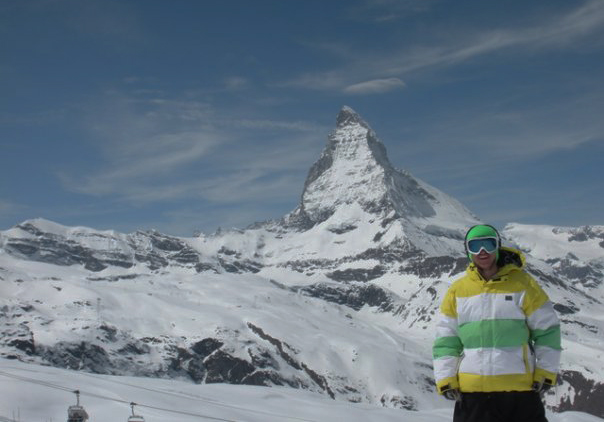 It’s that Mountain on the Toblerone Packet…and a chap in a very vivid jacket.

Who would have thought that you could shred just a 5 hour drive from Las Vegas and Los Angeles…..in May! Mammoth sits in the middle of the Sierra Nevada Mountains and is less than 150 miles, as the crow flies, from the hottest place on the planet ‘Death Valley’. It is also a 5-hour drive from San Francisco and less than 3 hours from Lake Tahoe, and the amazing resorts which surround the lake, including: Squaw, Sierra, Northstar, Alpine, Kirkwood and Heavenly.

For a resort in the US Mammoth definitely lives up to its name, 1000m of vertical combined with 3,500 acres of skiable terrain make it the largest ski resort in California. If freestyle is your thing then you’ll be happy to hear that Mammoth has 8 parks, 3 of which are open in May and include the infamous 22ft Olympic size Superpipe. Mammoth is open a couple of weeks later than the other mega resorts in Colorado and Utah, thanks to a deep snowpack and its altitude.

If you fancy combining something a little different with your visit to Mammoth then you can always pay a visit to LA or Vegas. If sprawling cities aren’t your thing then you could visit the Yosemite National Park, which opens at the very beginning of May. Yosemite is one of California’s biggest natural treasures that has become a hotspot for base jumpers and climbers due to its incredible landscape, which is littered with huge granite monoliths. The most famous of these is El Capitan, which has a face of over 900m tall. If throwing yourself off of a 900m tall rock doesn’t “float your boat” and you’re looking to do something a little closer to home then there are lots of hot springs around Mammoth, due to the surround volcanic geology, and there is the Volcom Brothers Skatepark. This skateboard park in Mammoth Village was built in memory of snowboarder Jeff Anderson and is one of the best skateboard parks in the US.

One of the main benefits of Banff staying really cold during the winter months is that these temperatures preserve a fantastic snow base for when spring finally arrives. In addition there are regular powder dumps throughout April that top up the snow levels and allow the locals to shred powder in comparatively warm weather.

Although winter is definitely coming to an end in April and May, with the wildlife leaving hibernation, ice melting and the flora and fauna coming to life, there is still snow to be slashed. Just be carefully you don’t ski into an 8ft Grizzly Bear! For those of you that like to work on your skiing/boarding technique while working on your tan: Louise is open until around the 11th of May and Sunshine Village, where we train the guys and girls on our Banff course, is open until the 19th of May. 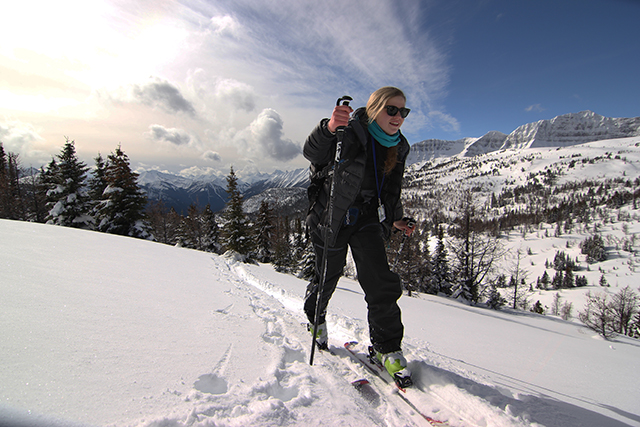 It ain’t called Sunshine Village for nothing!