The Peak Leaders ‘Whistler Bike Park Instructor Academy’ has kicked off and it’s been a bangin’ first week! It’s fair to say that we have an awesome crew here for the next 3 weeks and they’re all settling in nicely to life in the “Whistler Bubble” (It really is tough to leave The Bubble).

We all spent the first day getting sorted; building bikes, picking up season passes, and once that was done we went on a bit of a tour around Whistler, so that the trainees could get their bearings and check out this incredible place. At this point the park still had a couple of days until opening so we did the next best thing you can do besides biking in Whistler……an epic game 27-hole round of Frisbee Golf. The Frisbee Golf course in Whistler is on another level and proved a great way for the guys to spend an afternoon getting to know one another. 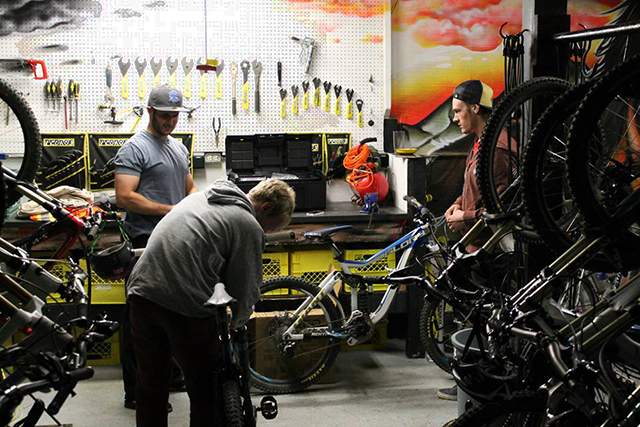 Not your average garage…. 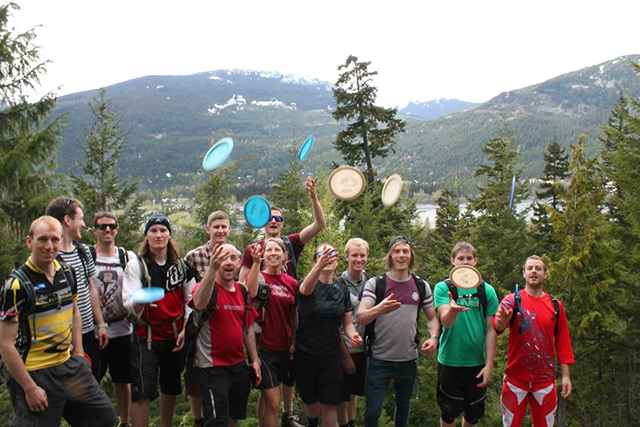 It’s going to get very competitive over the next few weeks!

The couple of days of training that followed were spent in the valley, learning the fundamentals of riding and teaching. We also did some XC guiding around the beautiful Lost Lake and into the Zappa Trails. These are a massive network of mellow but technical trails that are all named after Frank Zappa songs. We have absolutely no idea why. The trainees also spent a lot of time in Rebaglaiti Park (named after the (in)famous slalom snowboarder Ross Rebagliati). Although the idea of hanging out in a park with bikes may seem a little drab, we soon realised how beneficial and fun this would be. The crew learnt the essential “Skills” that we use when riding and developing riders, and some of the different waysto teach these skills. We talked through a basic beginner progression and lesson, and the many ways to improve as teachers and coaches. Nevertheless the emphasis is always on making the sessions as enjoyable as possible so plenty of games were played and a good time was had by all. 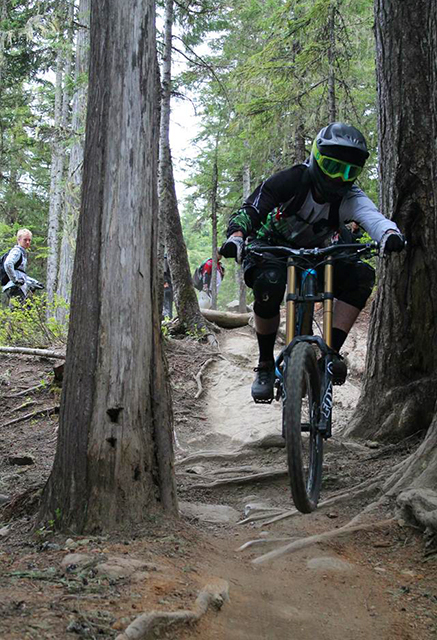 Checking out the Zappa Trails 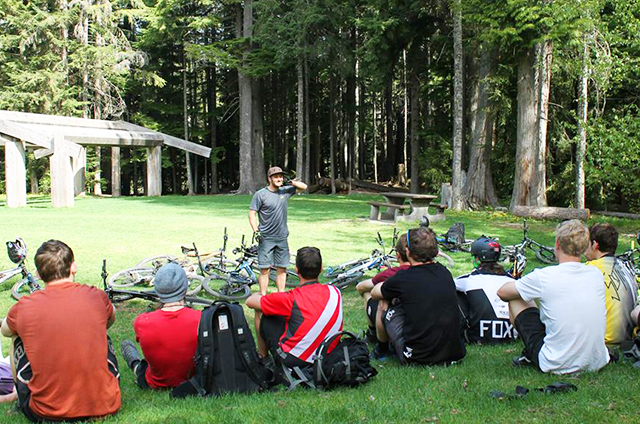 Learning how to teach the basics down in the Rebaglaiti Park

Our first real taste of some steeper and gnarlier terrain came on a trip up to “Cut Yer bars”. This is a blue trail climb that turns into a playground of rock-rolls and some super steep technical terrain. These are some of the best named trails in the valley in my opinion…”Roll Yer Bones”, “Suicycle”, “Shits And Giggles” and “Hands Of Doom”.

Time for some real fun!

The Bike Park opened this year with pretty much everything open. And not just open, but dry, which is a rare treat at this time of year. The vast number of trails opening in May was due to less snowfall than usual on the lower mountain during the winter. Lots of fun was had ticking off the trails and exploring. We also did some guiding practice through some of the green and blues and got into some basic cornering techniques.

The opening of the Bike Park

Friday was spent hanging out on some interesting sections of trail and looking at line choice, and options for coaching riders of different abilities and strengths through these trails. It’s great to stop and take a good look at the trails sometimes, even for our own riding, and can bring out some faster or more creative lines that can be missed otherwise.

Whistler bike trails in amazing condition for mid May

It has to be mentioned that the bears are now out in force. The bears that live around the Bike Park are very used to seeing people and bikes and it’s great to be able to see them so close and so calm within sight of people.

The good times will keep on rolling. Bikes are fun!