Last week in Saas Fee was the beginning of everyone’s Snowsports career as an Instructor. The BASI trainers were here putting them through their paces on their Level 1. Everyone understandably was quite nervous but very excited at the same time. 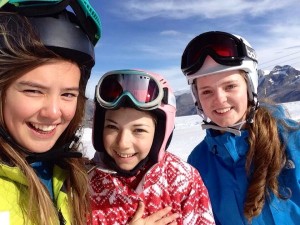 The trainers Les, Simon and Henry were great fun and everyone had an awesome time with them improving both their technical skills on the mountain as well as their teaching sessions. The start of the week started with a bit of a delay with the mountain being shut on the first day … however everyone was loving the powder and bluebird conditions for the second day. After this is was hero conditions and perfect weather for the rest of the week.

The first day of the course was a challenge in itself as their teaching was put to the test off the snow as the mountain was shut. Henry had his group teaching a random skill … Will thought it would be good to teach everyone the Cha Cha; some people picked it up quickly and think they’ll be in the next Strictly series. Meanwhile Les’s group challenged each other to spiderman press-ups, where the girls were holding their own in that group as usual. The star of the snowboarders was Stuart who made it back miraculously after having a bad wrist and then solved his main problem of riding like a T-rex! 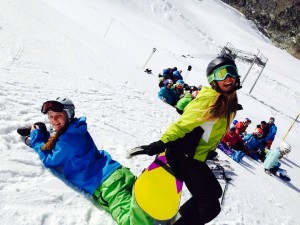 Over the last couple of weeks there has been a bit of competition developing between the two ski groups in particular. Each group claiming they are the ‘A Team’ and trying to out do the others, obviously in a healthy friendly way. This was put to the test on the final day of the Level 1 when they had a synchro short turn competition. Les’s group lost and they blamed this on Seonaid, but really they just couldn’t face the fact that they were no longer the ‘A team’! 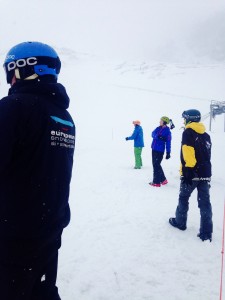 At the end of the week we had a fantastic outcome for the Level 1 so they all celebrated in style with some après ski drinks and visiting the local night sport later on. One or two people who got carried away didn’t make it past their own hotel room … exhausted from all the training at 3800m high! Most partied the night away until the early hours, with most of the boys now being able to use ‘I’m a ski instructor’ as a chat up line. 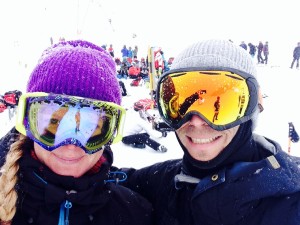 Still on cloud 9 from becoming instructors, everyone is now preparing for training next week with Emma, Julian and Graeme towards their next goal of BASI Level 2 … a bit of a leap but everyone keen to get stuck in to the challenge for the next 5 weeks.