This week was freestyle course week! And the trainees in Saas Fee had perfect conditions as they continued training towards their Level 2 ski instructor exams. One of the ski groups were in for a treat, having a new Italian trainer Paolo. Most of the week we had blue skies, and quite a but of powder, which luckily fell over night for a couple of nights, and giving us hero conditions each day!

In training with Emma this week, the skiers were pulling off some nice powder turns while skiing for the camera! With a fresh dump of snow on Thursday, it gave the trainees their first real taster at some powder skiing, which they loved and was highly entertaining! At first they found it tough to control their turns, but after a few runs bashing through the snow they started to love it despite a few tumbles! 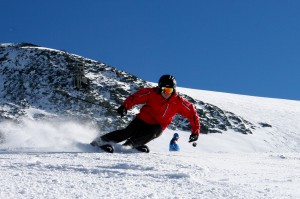 The biggest highlight of the week was due to another Italian man, Marco, a freestyle coach who came across and introduced them to the weekends’ freestyle course! With some excited and some a bit nervous they were in great hands and had an awesome time. The first morning of the Freestyle course they began learning to ski switch, which is much harder than everyone thought it would actually be to do properly. They moved on fast before most people had fully managed switch skiing onto ‘helicoptering’ on flat ground, which we had all seen Pete doing a lot before, but not quite as well as Marco managed to pull it off. This is also where Taylor managed to pop out of his skis and fall straight into the ground, which was very funny to watch!

By the end of the day the group had accomplished Ollys, Nollys, skiing switch and when and how to pop so you can do jumps, as well as learning about and how to do a ballerina. To mix it up and to test the group, Marco taught them some grabs and a couple of 180 spins. Most people had managed to do a 180 off the very small jumps at the park and George being a park junkie naturally managed a 360 quite easily with James just getting one in. Macro also demonstrated his own skills with tricks like a 360 tail grab off some of the larger jumps on the park as well as a back flip, which was very inspirational to watch! 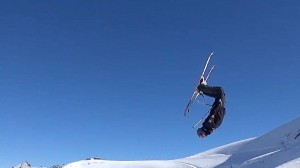 Going over the jumps was surprisingly easy once you knew what to expect, with maybe the exception of Sophie who went over the jump with her hand held over it and still screamed as she got in the air! But the half pipe certainly terrified almost everyone as they went through realising how steep the walls actually were. 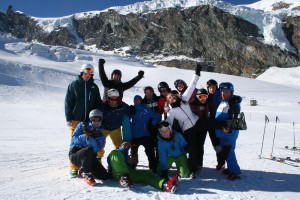 The highlight of the second day of the Freestyle course for the group was without a doubt Paolo’s wipeout! The group went off to find a bit of fresh powder and do a little jump off a ridge, which ended in Paolo face planting – always nice to see your trainer make a mistake too! The weekend finished in the skier cross, with everyone’s competitiveness coming to the surface!

A big thank you to Marco @FreeSkiCamps for coming to Saas Fee to teach all the guys Freestyle … an awesome weekend had by all!

Week six was action-packed as always here in Saas-Fee, and started with a reshuffling of the ski groups. Emma and Paulo debated about which skiers they were to have in their groups, and this led to controversy over which group would become the new ‘A’ team. A conclusion was not reached, but both ski groups were in agreement that the snowboarders were the ‘C’ team. As you can tell quite a competitive group!

With the Level 2 assessment just a few weeks away, the training became even more intense and focused, as we strove to resolve any technical flaws we had. We were joined for two days by visitors from Lovell Camps, who were looking for potential employees for the season. Will and Imi were the beneficiaries of this visit, securing offers of employment.

This week also provided the opportunity for some of the trainees to shadow some other Instructors sessions to gain greater experience of ski teaching in preparation for the season and their careers as instructors.

Patrick and his family returned from their holiday to retake control of the hotel just in time for halloween, and treated us all to some of Switzerland’s finest cuisine, as well as the largest portion of lasagne we had ever seen. Friday evening Halloween arrived, and (almost) everybody got into the spirit of things by dressing up in fancy dress and wearing face paint. Taylor, Pete and Sophie were the resident superheroes, who, always on duty, found themselves in confrontation with some supervillains over the course of the evening. It was evidently a tough night’s work for the Green Lantern and Wonderwoman, as they spent the entirety of the following day resting in bed after their heroic exploits the night before!

Emma was unable to incorporate Indie the dog into a costume, and therefore decided to abstain from dressing up to become the official photographer for the evening. She did however manage to stumble upon Max enjoying the delights of the night sky late in the evening.

With the schools in England on half-term, the Derrick and Ward Parsons families took the opportunity to visit Saas-Fee to check their daughters were eating their vegetables, getting enough sleep, and generally behaving themselves.

Winter seems to be approaching, with heavy snow and cold weather forecast for the week ahead, so we will all be making the most of any opportunity we have to go out and ski over the coming days!