Last week proves that starting your gap year skiing course early has its advantages!  The snow has been dumping down most of the time … winter has arrived with a bang! Monday offered beautiful snow conditions and an excellent day’s training for both Paulo and Emma’s groups. However, this was short-lived, as the clouds swept in throughout the evening, leaving the following day’s skiing in jeopardy with a snow storm. 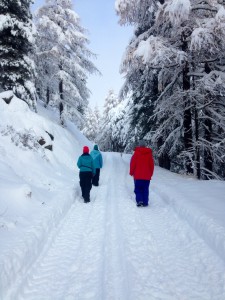 Walking In A Winter Wonderland

The mountain was closed on Tuesday, allowing the remainder of the group to get on with their First Aid training. The repetition of 30 chest compressions followed by 2 rescue breaths was a challenge for everyone and even a bit of a work out!

Our second closed day was action packed with theory sessions in the morning, being interrupted by the revelation that the rain in the village was turning to snow, and beginning to collect on the ground! It would continue to do so for the next 24 hours. After our morning theory session, many of us were lured to a local sports hall to play touch rugby, only to be surprised by a fitness circuit. But it was an awesome insight into the type of fitness training which is specific to skiing and snowboarding. 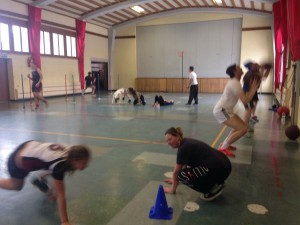 Eye of the Tiger!

After being shown photos of last years inspiring attempt, we were motivated into building an igloo to surpass theirs. Sophie, the nominated leader, kept morale up by pouring drinks throughout the afternoon and into the evening. As a reward for bearing the cold inside the half-built igloo, Patrick provided beverages whilst we sang along to Christmas songs. As day turned into night, only the most hardy builders stayed out, and vice Captain Taylor took the lead. Alongside him, Will and George spent 3 hours digging out the inside of the mound and we were outside making bricks until we could no longer feel our hands. The next morning everybody looked outside to see an igloo that was perfect in everyway, it was inconceivable that such a structure could ever fall down, what a success.

Friday came around, the sun was shining, so the group took on some challenging teach sessions. Everyone was in a creative frame of mind, and themes ranged from Harry Potter to space travel. After a relaxing hot chocolate break, the afternoon was very mild, so when we returned to the snow, we stripped off and were teaching in t-shirts and bobble hats (a confusing experience for many). 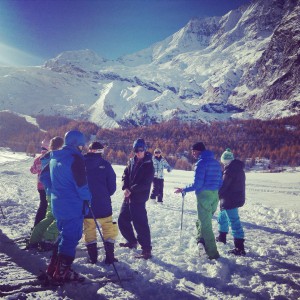 The mountain finally opened again on Saturday, with the added bonus of the runs all the way to Morenia being opened too, and we were quick to take advantage of the extra snow, with extra training sessions taking place over the weekend.

We said goodbye to Paulo at the end of week 7, but welcomed back Julian to help fix any remaining flaws in our skiing before we start our level 2.