Another week has flown-by out here in Banff. It isn’t long until the guys and girls have to put the past couple of months training to the ultimate test and take their level 2 assessment.

The start of week 9 marked the dreaded 2-week countdown. If there were any changes that the trainees needed to make to their skiing or snowboarding it would be in this week, giving them time to perfect these newly acquired techniques/skills in the penultimate week. Nevertheless the week didn’t begin with training, it began with a touring/splitboarding trip for some of the trainees in the backcountry close to Sunshine Village. Having never toured of splitboarded before some of the more athletic trainees were keen to earn some fresh tracks and inhale some fresh mountain air. Touring and splitboarding involve walking up a mountain on a pair of skis, or two halves or a snowboard, with skins (attachments that allow you to slide your ski uphill but prevent your ski from sliding downhill) then skiing or snowboarding back down. Leading the trip was experienced Mountain Guide Martin Lefebvre, a local legend who has an unbelievable knowledge of the mountains around Banff and is also an Avalanche Safety expert. After a quick recap on how to use all of the Avalanche Safety equipment, a fairly in-depth briefing from Martin on the route we would be taking and the hazards involved, and a fair bit of ‘mincing’ from course leader Tom  we were off.

Izzy getting into her stride

After a fairly straight forward first descent down below the back of the Standish lift the guys and girls were keen to make their first ascent. After a comparatively quick transition period spent splitting the snowboards in half, extending the telescopic poles, shedding layers of clothing, and applying the skins, we were off! Youthful enthusiasm meant that the first ascent from the middle of a frozen lake to the top of our first ‘mini’ peak was really quick and took less than 15 minutes. Once at the top of the hill we all had a drink and a snack then went about putting our equipment into ‘ski and ride mode’ and reapplying our layers. As we did this Martin went and dug a pit to check the stability of the snow that we were about to ski and snowboard down. With the thumbs up from Martin we all made our way individually down the slope, screaming and hollering as we cut through the fresh virgin powder. It’s fair to say that it felt a lot more rewarding having “earned our line”.

The next tour was considerably longer than the previous short mission, in fact  it was probably about ten times the distance……which obviously took it’s toll on a few of the trainees.  It just so happened that it was one of the warmest days we’ve had on the mountain, which meant we had to consume lots of water and take regular breaks.For those that had previously doubted Martin’s ‘Mountain Goat status’ they were blown away by his relentless blistering pace, which appeared to have absolutely no effect on him………I’m not sure he even took a sip of water or broke into a sweat! We made a couple more ascents and descents before the day was over, and all slept very well that night! Despite it being seriously hard work almost all of the team really enjoyed the day, there’s something very serene and calm about ascending a mountain, having the time to look around and admire the scenery and, in a very cliche/cheesy way, ‘to be at one with nature’.

Having a moment to enjoy the views…..while the group power on

Following Monday’s adventure the skiers spent Tuesday doing what many would consider the polar-opposite to ski touring…….a day in the park! This was a day that the majority of them, with the exception of Oscar, had been dreading. Remarks about how it wasn’t ‘proper’ skiing had been circulating the group and it was touch and go whether they would actually turn up. Fortunately the weather was beautiful and the parks had been groomed to perfection the night before, and it’s fair to say their coach for the day ‘Steffan’ was a top guy. By the time course leader Tom turned up to take some photos he was greeted by an overly excited group of skiers that were having “their favourite day of the course so far”. The level of progression within the group was crazy and by the ned of the day they were all throwing 180’s over the medium jumps in the park and sliding confidently along the boxes. Obviously there was the occasional stack but as we are so often reminded when skiing or snowboarding in the park “no pain, no gain”. 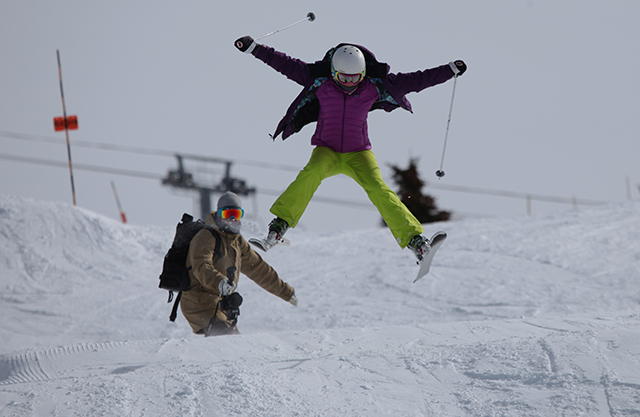 Elise being followed over the jumps by Tom and his camera. 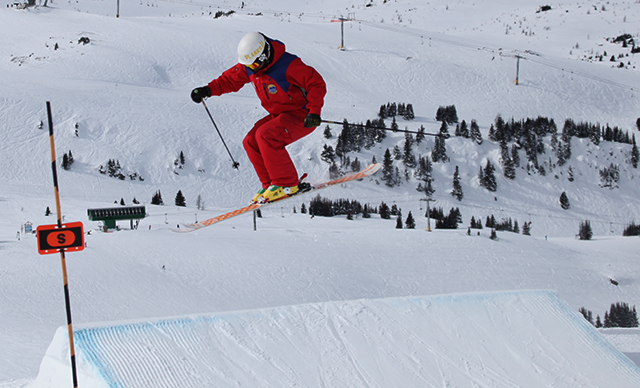 Wednesday morning was an early start for the trainees and unsurprisingly Tuesday’s extreme endeavours had left a couple of the skiers feeling a little delicate. Despite a few achey bones the trainees jumped on the first bus and headed up to the mountain to train with Kenji and Jesse. Being the true perfectionists that they are neither trainer gave the guys and girls a break and worked all day on individual technique and teaching practice. The remainder of the week’s training was very focused and intense but the changes that each of the trainees made was definitely worth the effort.

This week Wednesday’s training started and and finished an hour early. This was so that we could jump on a coach with Larry ‘the Ice Hockey Fanatic’ Fremes and travel to the Calgary Saddledome to watch the Calgary Flames play the Anaheim ‘Mighty’ Ducks in an NHL league game. After a surprisingly entertaining bus ride, thanks in part to Larry’s 80’s infomercial-esq ‘Introduction to Hockey’ video edit and a prize draw for a 2002 Olympics Canadian Hockey Jersey, which none of us won, we arrived in Calgary. Ice Hockey is a religion in Canada so it wasn’t surprising that over 20,000 fans dressed in red turned-up to see struggling Calgary play the team from California that were currently sitting second in the Western conference. Unfortunately Tom had his ‘professional’ camera confiscated on the way in to the stadium, so he was unable to get any close-up shots of the action, so I’ll do my best to describe the scene. Imagine a sea of red lining an impressively large arena, an arena that was surrounded by every form of fast food outlet on the planet, and numerous bars serving gassy Canadian lager. The combination of: beer, hot dogs, thousands of screaming fans, the stereotypical organ music which you imagine you’d hear at a Baseball game, and a pyrotechnics show that would put Puff the Magic Dragon out of business, ensured we enjoyed every minute of the game. To top off the evening the Flames won 7-2 over the Ducks, which nobody saw coming! Sam, Archie and Henry’s singing on the way home confirmed that they won’t be auditioning for the X-Factor anytime soon. 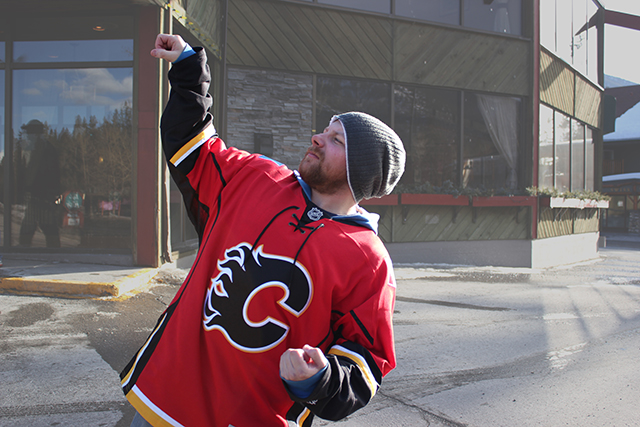 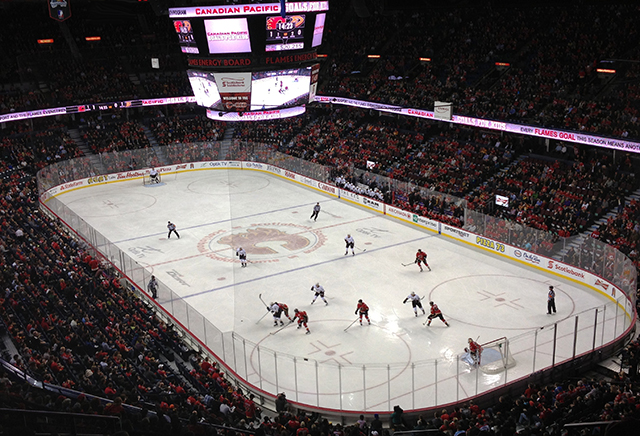 Best seats in the house!

For the rest of the week the trainees worked really hard with Kenji and Jesse. It’s fair to say that by the time Friday evening came around they were all exhausted. Not that we needed an excuse to hit the Banff nightlife, but Izzy’s Birthday on Saturday was a nice excuse to go out and enjoy a group meal. Being half Greek (and half Irish) Izzy was keen to book us into the local Greek restaurant ‘The Balkan’. The food was fantastic and we even got to enjoy some Belly Dancing while we struggled to digest the last of Izzy’s Birthday Cake. Despite being unsure about whether Belly Dancing is a Greek tradition (we’re all convinced it isn’t) Oscar kept the table entertained with his Macarena-inspired Belly Dancing moves while we settled the bill and made a b-line for the door. 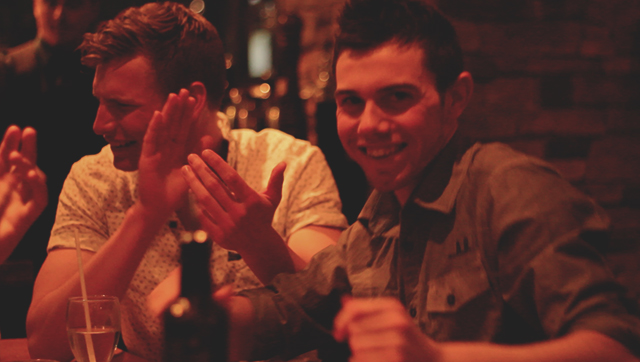 If that description wasn’t detailed enough for you then make-sure you watch the latest video blog below: