The final week of the Peak Leaders Saas Fee Course had finally arrived! Half way through their BASI Level 2, emotions and excitement were running high. The snow was amazing and blue skies everyday … what more could they ask for on an exam … perfect conditions!

There were some awesome and entertaining big tumbles in the powder this week! There were a lot of smiley faces at dinner that night after an epic day up the mountain! A great way to start the second week of BASI Level 2 course.

Jason had his group working hard at the end of last week perfecting their plough paralleling. As a result they were the go-to central theme coaches last weekend, all of them insisting ‘its not rocket science’. Everyone being very determined to succeed, they were super motivated at the weekend for hard-core practice. Sunday came and it seemed that the odds were against James, as one of his skis cracked and the other one’s brake fell off (we hope his luck improves next week).

The final week of the Level 2 consisted of the trainees perfecting their technical skiing on piste, off piste, bumps, and steeps. Not only that but were busy teaching each other in scenario sessions and perfecting their skills as amazing instructors to teach real clients!

The snowboarders powered through the week, despite a broken toe strap on Jack’s board, which was particularly difficult to fix, and some big surprises when they went off-piste in the white out on Monday. Although some things took slightly longer to learn from, (Greg wiping out spectacularly at the exact same spot two runs in a row), they all made lots of progress (Stuart finally getting his ‘Tyrannosaurus Rex’ arms under control).

Everyone did amazingly well in their Level 2, lots of very very happy people! Friday night was a big celebration and everyone’s final night, so we all celebrated together with taking over a Pizzaria and having some celebration champagne! 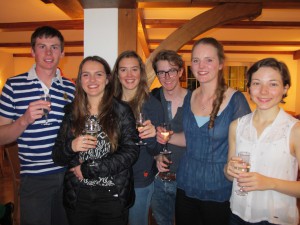 Everyone was very much looking forward to their season ahead all over the world to all the different resorts and countries they have jobs in … from Japan, Canada, Switzerland, Scotland, Bulgaria, and Austria! Have a great season everyone! Enjoy teaching and being part of a ski school as ski and snowboard instructors!