The trainees have been basking in the warm after-glow of a successful BASI 1 assessment week. The piste conditions were tough but exhilarating as banks of cloud rolled in and out of the Verbier ski area. With the holiday season approaching, there was also a noticeable influx of recreational skiers on the slopes and the trainees gradually started to look on them less as ‘obstacles’ and more as ‘future clients’! 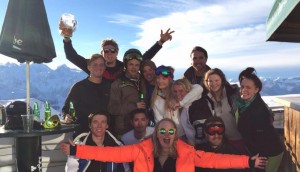 After a couple of nights of gentle celebrations in the newly open bars of Verbier, the trainees all spent a day hosted by British Mountain Guide Graham Frost, an expert in the mountain environment and, especially, the dangers of avalanche. The trainees all loaded up with rucksacks containing specialist off-piste safety equipment, but Graham’s first message was that avalanche safety starts with careful planning for a day’s off-piste adventure: this can usually avoid the need to launch a spectacular rescue. 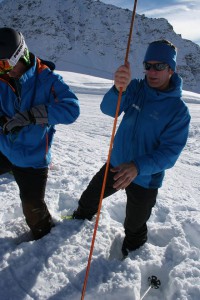 It’s a tragic fact that 22 people died in avalanches in Switzerland last season, all too often triggered in the predictably dangerous conditions of large quantities of snow on steep slopes shaded from the sun. While learning this sobering topic, the trainees had fun practising the skill of locating simulated avalanche victims buried in the snow by using a radio transmitter-receiver, snow probe and shovel. 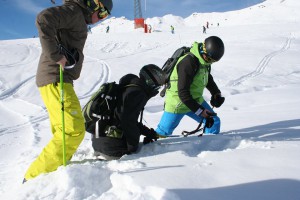 A side benefit was that the trainees had an opportunity to get some off-piste lines in in some good pockets of powder under Graham’s watchful eye. Paddy and April assured the group that their time spent flying headfirst into the powder was just to ‘check snow quality’…