Week 3 in Whistler: Rising to the challenge

Darragh again, and the final Week 3 of the Whistler Bike Park Academy. People say, “Time flies when your having fun and getting it done!”… and that was definitely the case for WK 3 – time has gone in a flash!

Rising to the challenge

Let’s get one thing straight. The IDP Level 2 is no easy feat.

The pressure was on the Peak Leader’s crew, big style!

We really needed to knuckle down, focus on some pretty difficult exams, and come away smiling.

Adding to the tension was a blistering heat of an unusual early summer.

Which meant sweat, sweat , and more sweat – as every spare hour we had was spent riding hard and perfecting technique. 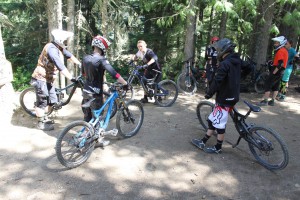 Quick recap on technique between laps

Fired up for exam time

The IDP Level 2 exam is split into coaching sections and personal riding sessions.

Coaching sessions require a real understanding of every aspect of mountain biking.

You need to know it, and be able to say it easily.

The crew had to give the perfect explanation, followed by an equally perfect demo.

Personal riding sessions took the group up to the famous and scary “Dwayne Johnson” rock drop and joyride jump sections.

You gotta really know what you doing to make this look good! 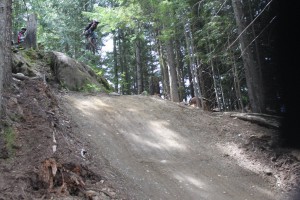 Watching the crew charge Dwayne was a blast.

It showed just what 3 weeks of awesome training can do for a rider’s confidence.

Everyone made this difficult “pro-only” bike park trail, and the features, look easy and stylish.

We normally throw out “Send it!” when one of the crew is dropping in to ride, but with everyone fired up it was time for a new motto: “Style it!” 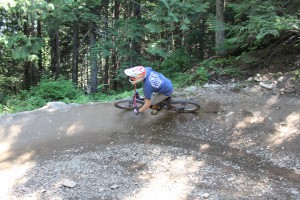 Remember… speed is your friend!

Week 3 is always pretty intense. No one has time to chill. Every minute needs to be focused.

And then quicker than you think, it’s the final day.

Good news came in as one-by-one the group were ticking all their respective boxes.

Aiming to pass the IDP Level 2 first time is a big deal and hard work. In a testament to the exam’s credibility, most but not all of the Peak Leader’s trainees passed.

It’s always tough not to get it first go, but not unusual.

With our crew already all having the IDP Level 1 AND the rest of the summer in Whistler Mountain Bike Park to practice – they’ll ace Level 2 before summer is out for sure. 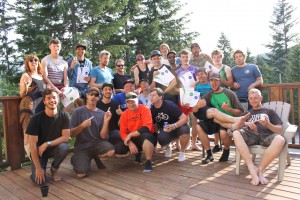 Happy crew at the end of Whistler Bike Park Academy 2015

With the course over, for the crew it is now moving time.

We wish all of our Bike Park Academy group the best for an epic summer here in Whistler.

And we know they are going to love working their dream job as a Whistler Bike Park Guide.

For those trainees travelling home after the 3-week course, we know they learned and laughed a lot!

Plus, we all became better riders and coaches.

Something which will keep all the Peak Leader’s trainees in demand at their local trails.

Especially now they have the “Whistler shred” touch!

Or even if you just fancy a some weeks learning to become and awesome rider!

You never regret the things you do, just the ones you don’t!

Check back and hear from our trainees themselves as we’ll be posting interviews. And like and share to the world!

For me, the crew and the course here in Whistler has been an awesome time.

Thanks to everyone here, and you for reading – see you on the trail hopefully.

Now it’s time for a beer!