Cheryl McClorey completed the Peak Leaders Whistler Bike Park Academy coaching course back in May (read about it here). She was such a hit we asked her to stay on and help with course leader activities for the new Coaches Camp 2015 crew. Here’s Cheryl’s week 3 blog …

What a week to be in Whistler, the village is buzzing with bike enthusiasts, pros, races, freebies, and events to watch and get involve in throughout the festival.

Rubbing shoulders and riding alongside pros is a bikers paradise, and they’re not shy for a regular chat either.

This week saw the Peak Leaders trainees ride “Top of the World” for a second time, “Joyride”, “Freight Train” and the just opened “Dusty’s DH”.

We also partook in some new perks, like the Creekside Gondola and visiting the Olympic Plaza for the totally awesome Dirt Diaries! …and if that wasn’t enough, we also got to spend a few hours with Argentine Pro athlete Martin Cepi Raffo, who just finished 3rd in the Masters category for the Garbo DH (check out this awesome Photo Epic by Colin Meagher over @Pinkbike) and 4th for the Men’s Amateur Sram Canadian Open Enduro.

Some result and congrats on your wins Cepi!

Back to business towards the end of the the week where we continued with more IDP Level 2 drop and jump theory in preparation for the final assessment and the final week.

After an intense three weeks of riding and learning, the fresh mountain air can really take it out of you.

As a treat for the weary group, we headed up to do some fun laps so the groups could practice technique on all the Whistler bike park has to offer.

Dahj’s group headed for the newly opened “Dusty’s DH”, with trainees getting seriously loose on those steep, wide open corners, dig those heels in and lean the bike!

A drifty “Dusty’s DH” to say the least, but super fun and with nothing really like it on the mountain, some definite new skills acquired.

Getting stoked on the new skills @Dusty’s DH

We headed back up the “Creekside Gondola”, the original way to travel up the mountain, built in 1966.

The operation was funded by a group of Vancouver businessmen who formed the Garibaldi Olympic Development Association (GODA) and had the dream of one day bringing the Winter Olympics to the Coast Mountains, which finally happened in 2010.

In the afternoon, we rode “Top of the World”, and also take the opportunity to take some photos of the epic mountain landscapes, blue skies while the “Garbo DH” was in play.

Top day on Top of the World @Whistler

That evening, we all gathered in the Olympic Plaza for some night time cinema on the grass.

“Dirt Diaries gives the athletes a chance to take the camera in their own hands and capture the stories they want to create,” says Darren Kinnaird, Crankworx World Tour General Manager

A brilliant way to spend an evening during Crankworx and plenty of laugh out loud moments, all the edits were of an insanely high standard.

And, the winner goes to Kyle Norbatron – one of the three members of the Coastal Crew, a Red Bull Rampage contestant and all-round Mr. Nice Guy for Specialized Bikes (check his “Week of Rampage” video from last year) – who teamed up with last year’s winning film maker, Matt Dennison.

Rubbing shoulders with the Pros

Big thanks to our man that can, Darragh, who organised a few hours for us to ride with pro athlete Martin Cepi Raffo. 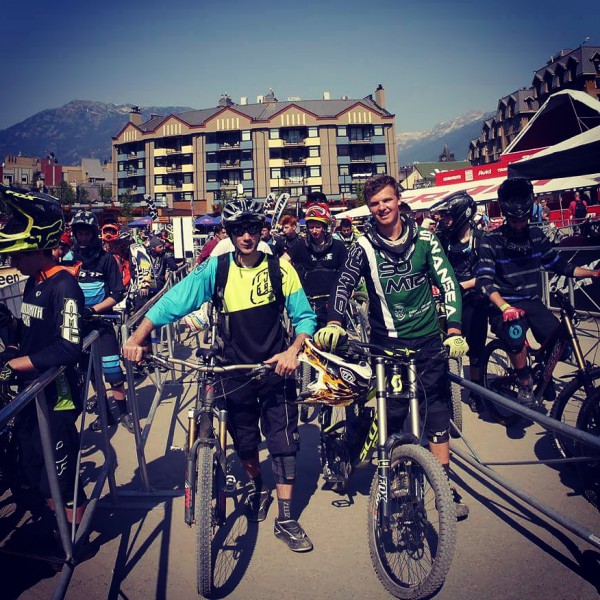 The trainees enjoyed spending a few hours chatting with Cepi about race lines and just enjoying a few fun laps riding “Crank it Up” and “Angry Pirate”.

Thursday was a day of sheer excitement!

First ever time watching the Whip Off at Crankworx, and it didn’t disappoint.

Unfortunately, I arrived a little late to the village, and was met with a swarm of bodies fighting for the chairlift and gondy … I decided to hike it.

Well, walking on foot to “Crabapple Hits” certainly makes you appreciate the size of the mountain … I arrived a little hot and bothered, but the “ooohs, aaahs and yeeeoowws” from the crowd reminded me of my first time ever at a festival, and I couldn’t wait to see whip off trains a plenty!

Holy moly?!? These guys were showcasing some serious hang time, enough of my natter though, I’ll let the photos do the talking …

Getting whippy at Whistler!!! 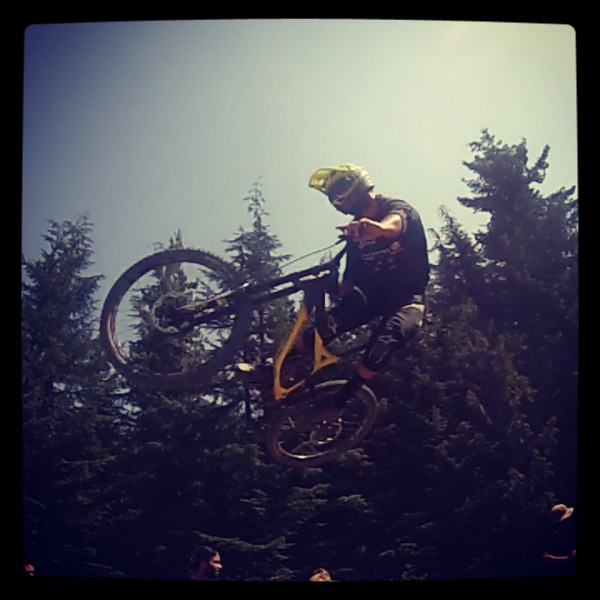 After a cracking lunchtime distraction, it was time to session some drops.

I headed off to shadow Dhaj’s group, looking at the “Fade to Black”, a double black trail with some nice drops and step ups, and with no hesitation, the trainees made it look easy.

Focused on the landing …

Next up, the group tackled “Clown Shoes”, another double black, with a bit of everything, tech, rock rolls and a series of drops, the last of which is one of the biggest drops on the mountain.

Not one to hit lightly, but some of the trainees gave it a go regardless.

The rest of us can only admire from the sidelines until our courage matches our ambition :)

… while the crowd focused on the action!

Get in touch here