Week 1 in Austria and our group has already had bluebird skiing, bowling and the Beach Boys!?! Here’s the first of the updates from group leader Tom on the St Anton ski instructor course 2015…

The crew arrived late Friday night, excited to get started on the 4 week ski instructor course in St Anton, but pretty tired from a day’s traveling.

Once rested, the next day was up and straight at it with some “co-ordination exercises” with Florian and brushing up on the German language skills with the teachers from Innsbruck.

The new Peak Leaders dance crew? Or Florian working on some aching legs?

Florian definitely put the crew through their paces as the next day there were some sore bodies… the exercises also brought out everyone’s inner boy-band and girl-band, so you’ve been warned in case there are any video blogs that might be coming!

Day two ended with a final gear check and a bit of last minute shopping so everyone was ready for the first “ski day” with the coaches from from the Ski School Arlberg.

Kaunertal glacier, Tyrol’s youngest glacier, was what awaited the group on day three.

Skiing at levels of 3,200 metres, where you can see Italy on one side and Austria on the other, made for an amazing first day on the slopes.

We were treated to the best of conditions, beautiful blue-bird skies without a cloud in sight.

New snow on the glacier meant 15 cm of freshies to play in and cold enough for the snow cannons to make even more.

Everyone realised Kaunertal glacier was a special place… and a cold one!

Temperatures dropped to -20 during the day but that didn’t stop the smiles and high spirits that always come when you’re having an awesome day on the mountain.

As most people were trying their new ski gear that they had only been staring at up till now… there were inevitably a few falls – all to be expected on day one though.

New language skills also tripped a few of the crew up… and everyone tried hard to remember the lessons as the coaches chatted away… in German. 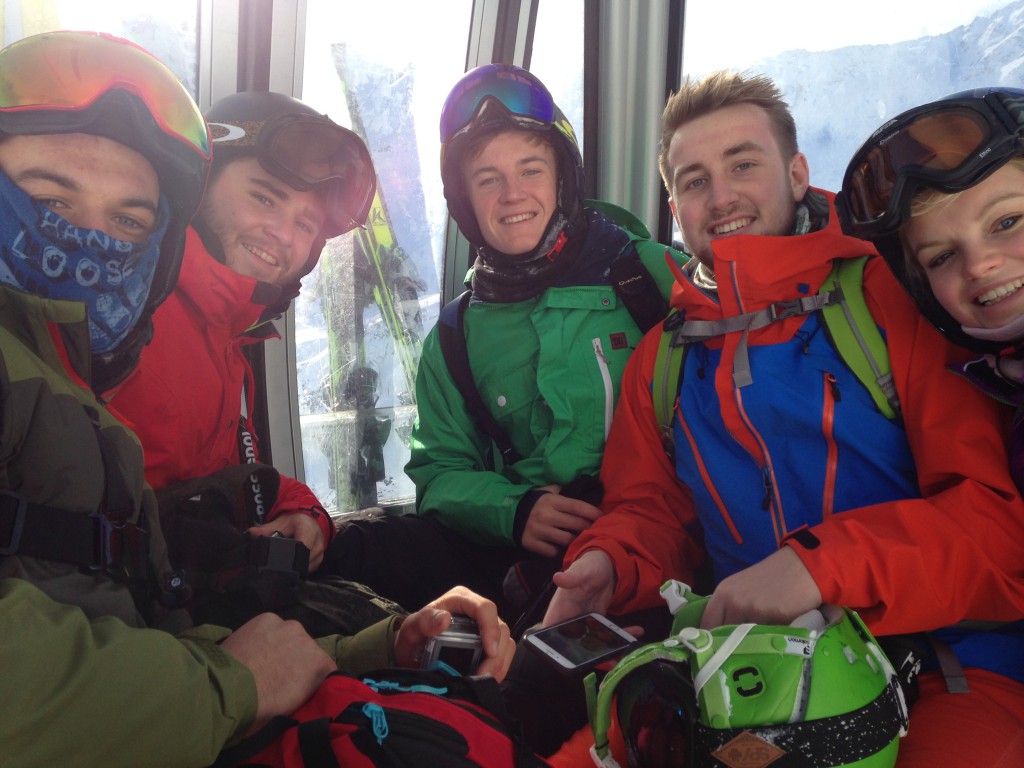 Taking a break from -20 in the warmth of the bubble

The Peak Leaders coaches, Frank and Fossi, each had over 20 years of experience in ski teaching and Fossi had been coaching future ski instructors for over 5 years… so they knew to go slowly at first, to the happiness of the group.

Can you keep up?

As easy as day one might have been on the slopes, the “infamous leg blaster” exercises with Florian turned legs into jelly.

Florian’s thinking is that it helps the crew be prepared for “whatever the mountain throws at them, bumps, powder or steep runs”.

Florian gives the crew a minutes rest… before pushing them again… ski camp or fit camp?

It may well “give them the confidence to push on with their skiing” but Charlie summed up the group’s thinking when he puffed out the words, “I didn’t know I had those muscles, but now I can’t ignore them!”

A pub quiz on Austria and the area around near St Anton got us all up to speed on key facts – important for that ski instructor lift chair chat!

We also wandered to the local arl.rock center that had a climbing area for bouldering and harness climbing, an area to practice shooting for the winter biathlon, an Asian restaurant, and 9 pin bowling alley.

Of course, we had to have a bowling challenge and the competitive spirit soon came out.

George had the roll of the alley this time and was crowned “Champion” but not for long, as there was definitely a return match and some eager to beat him next time!!!

The week wrapped up in surreal fashion with the free resort opening concert at nearby Ischgl.

15,000 fans at the Beach Boys concert… but a bit chilly for a Hawaiian shirt

“Relax if you can… ” is Ischgl’s motto and no-one did that… instead it was party-time despite the -10 degrees as the Beach Boys brought their surf-style of music to an Austrian-style Aprés “in my ski boots” dancing on the slopes.

Week 2 is already here and the group are focussed to keep on improving their ski technique and start to think, teach and speak like an instructor… in German of course.

Wish them luck and check back for more soon from St Anton!