PEAK LEADERS IS FOR LIFE, NOT JUST FOR WHISTLER!

Cheryl McClorey completed the 3 week Peak Leaders Bike Park Academy back in May 2015 (read about it here) and is now back living in Scotland and saving for the forthcoming 2016 season in Whistler. In the meantime, she has been busy riding her local trails and visiting fellow Peak Leaders graduate Gavin Marmion in Northern Ireland. Peak Leaders is for life, not just for Whistler…hear more about her trip!

I’ve been delirious these past few weeks, dreaming about Whistler, and seeing all my Peak Leaders riding buddies again…they call that Whistler withdrawals and the struggle is real! 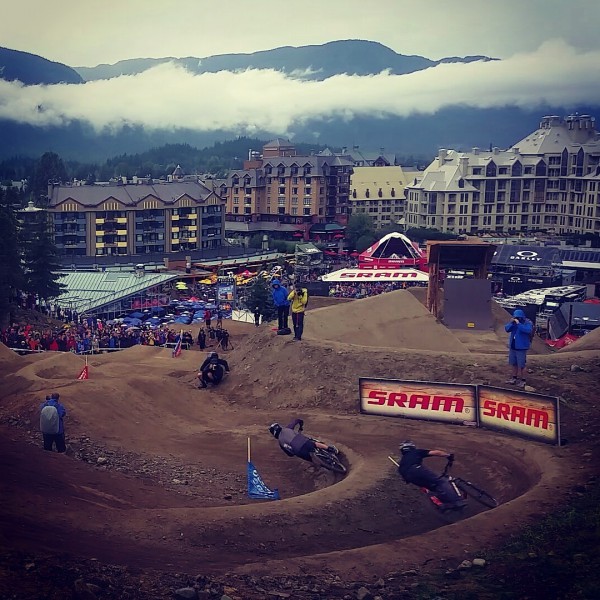 It’s been nearly 9 months since the Peak Leaders Bike Park Academy and the start of an incredible season in Whistler.  As soon as I touched home soil, everyone wanted the lowdown, and for anyone who’s travelled will know, that’s extremely hard to do.  The best way for me to share the experience, is to describe it as a series of truly memorable moments, snapshots if you like; picking my jaw up from the floor appreciating the Sea to Sky highway for the first time, sending the ‘Dwayne Johnson’ drop, sharing the mountain with Whistler’s famous black bears, chatting with Joe Barnes and Fabien Barel on valley trail ‘Hey Bud’, paddling through the river of dreams listening to reggae, sessioning Squamish trails with new friends, achieving personal goals and qualifying as a guide, forming genuine friendships centered around a passion for riding…I could go on, but the best way to really understand, is to make your own series of incredible moments…and Peak Leaders was definitely the catalyst for such a journey! 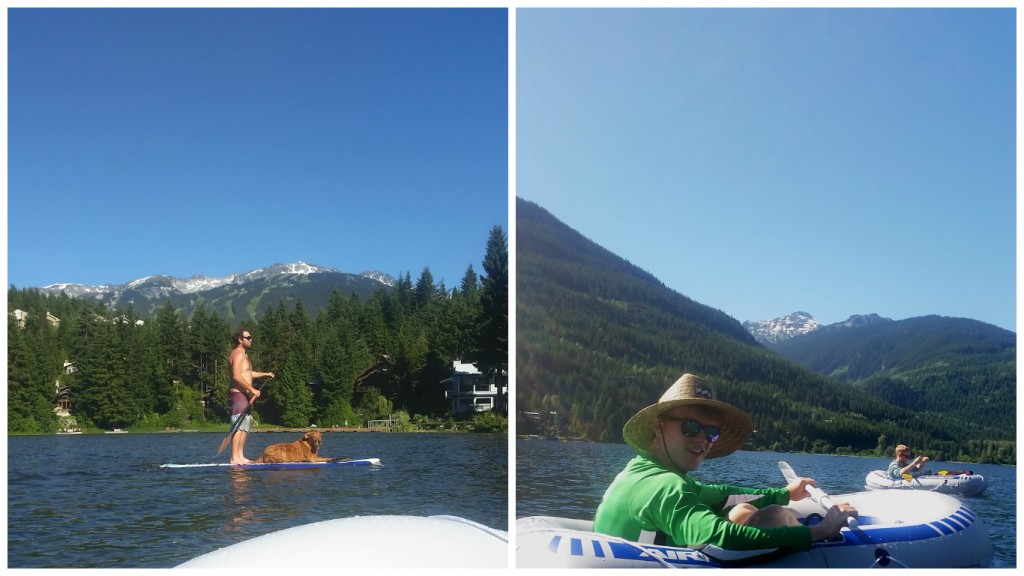 Friends for life with Peak Leaders

I’m going to focus on the friendship part as I’m just back from the best week visiting Peak Leaders graduate and chum, Gavin, in Northern Ireland.  We both left Whistler within weeks of each other, and while Gavin was going to uni to embark on a Medical degree in Belfast, I started officially working for Peak Leaders back home in Scotland! 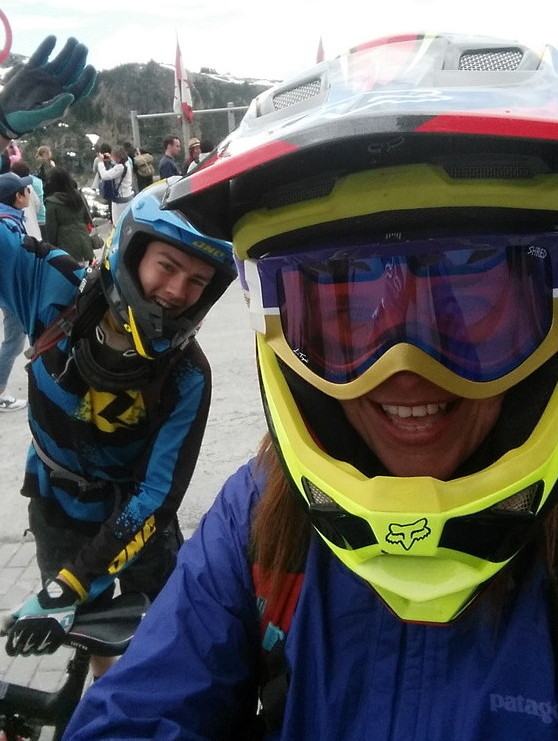 Having chatted many times over a few beers about visiting home turf for some local riding, we actually went and made it happen, and in no time, I had booked a direct flight from Aberdeen to Belfast for a swish £48 return, armed with my Rocky Mountain and a fresh nose for new adventure.

I had just left sunny but unusually icy temperatures of -6C in Aberdeen, to a balmy, better yet, tropical Northern Ireland at 12 C and welcome clear blue skies. I’ve travelled a few times now with my bike, so my skills at packing up are swift and sure, blowing dirt off my Multitool 5mill like a cowboy blowing smoke off a pistol!  Things got off to a cracking start when I saw the plane, a little purple number, so I whipped out the GoPro and took the obligatory travel shot. 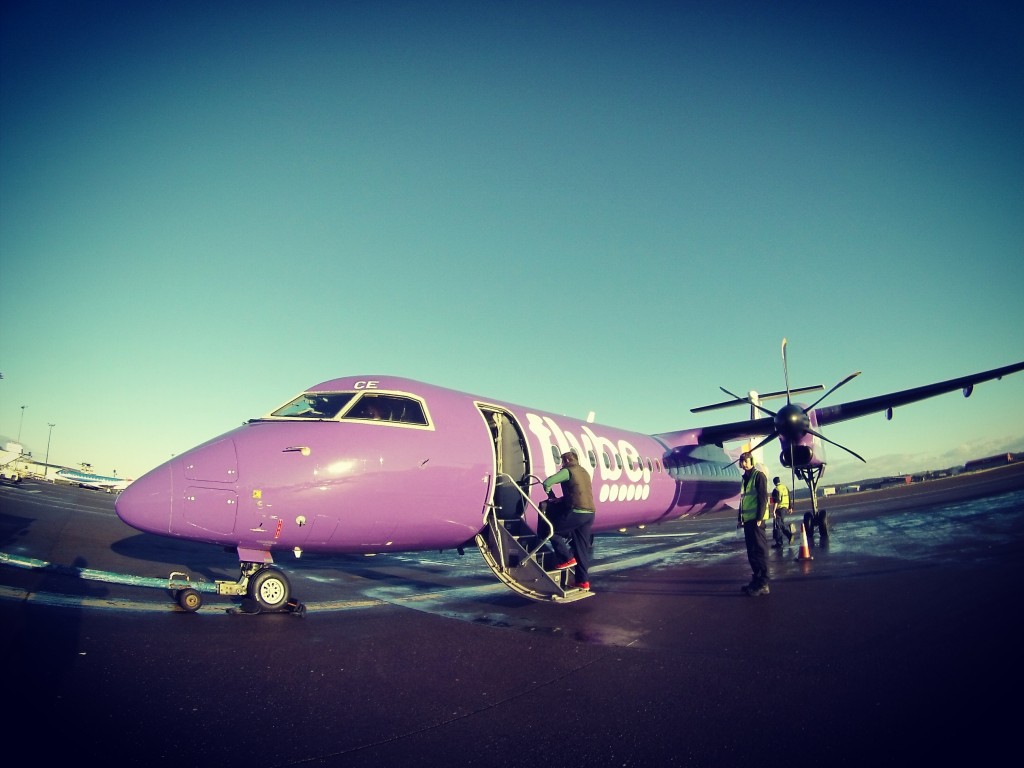 I was kindly invited to stay with Gavin’s family in his hometown of Castlewellan. Gav and his Dad Liam picked my bike and I up at the airport. Having quickly made friends with the dogs, Honey the Golden Retriever and Beauty the Collie/Lab, I got a tour around the place, absolutely delighted to meet the long-term resident chickens and even giving one a wee pet :) following that, we quite aptly tucked into a majestic fry up with freshly laid eggs, before building up the bike! 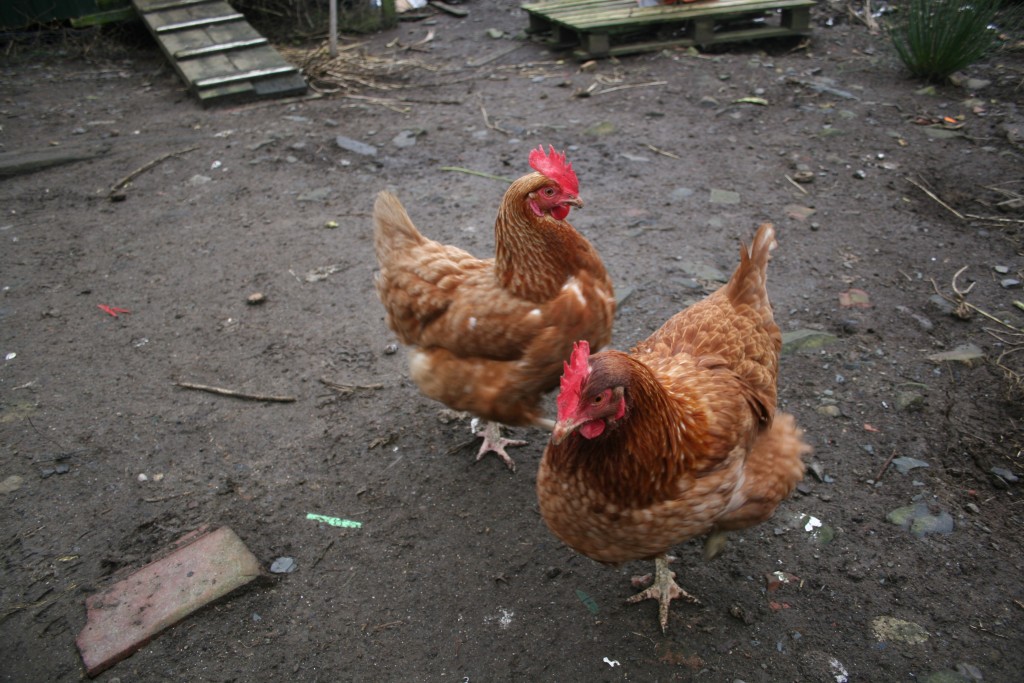 That evening, we chatted through all the local trails and came up with a rough plan for riding the next few days, although as per usual, UK weather was at it’s finest, wet and windy. I had prepared for such an event, as any staunch UK all weather rider does, and braced myself for a very muddy weekend

Up and at em around 8 am, we inhaled the porridge, filled the hydration packs, loaded the bikes, stashed the amazing homemade packed lunches courtesy of Gavs amazing Mum, Dympna, and set off to Tollymore Forest! Just a short 20-minute drive away, we drove through the valley-esque countryside, through some spectacular 1 foot deep puddles and arrived at the car park. 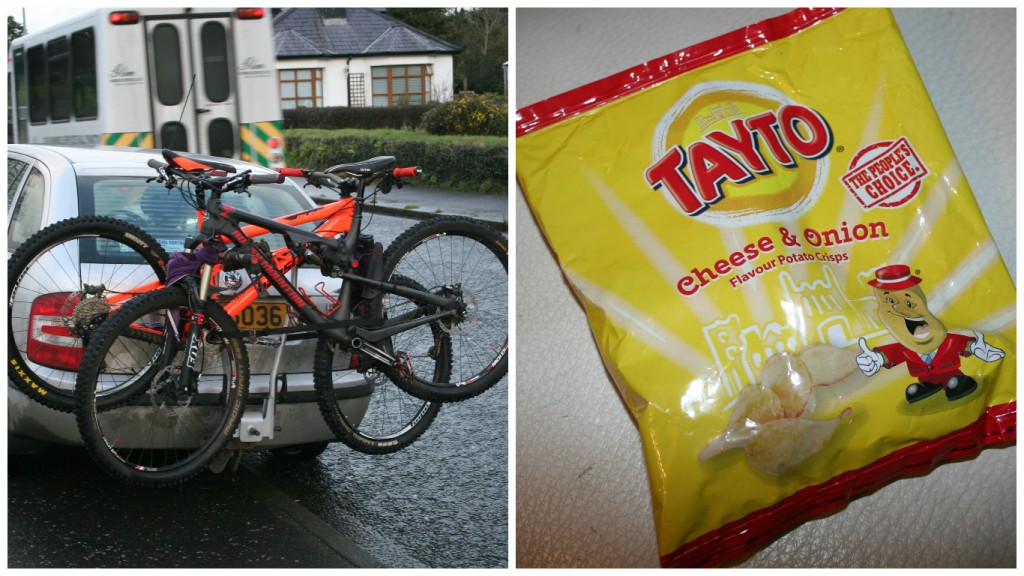 We did hesitate somewhat in the car as the raindrops crashed down on the windscreen, stroking our chins like…hmm are we actually doing this?!? Then we pulled ourselves together and made a bolt to the trailhead, within 10 minutes we were warmed up, the rain faded and remembered why despite the lashings of wet and mud, getting out on your bike is just the cat’s pyjamas!

Castlewellan has purpose built MTB trails powered by Chain Reaction, but today we were gunning for the natural stuff. Tollymore Forest has it all, a short, slippy climb to the first trail, which had a succession of  jumps to liven the heart rate and lots of roots and rocks to keep you on your toes. We smashed it down to the bottom and were greeted by a very swollen Shimna River with all the tempestuous weather of late, but we ‘kept her lit’ (giving the Northern Irish banter a good go) and braced for the first proper climb.

We sessioned a few trails, some cracking singletrack, a few wee gnarly, steep chutes with rock drops and plenty of jumps, combine that with a lot of wet mud and you’ve got yourself a top day out on the bike and definitely gave the legs a bit of a beasting! We ticked off ‘Jurassic Park’, ‘Laurel & Hardy’, ‘River Run’ and ‘Not Yet Named’. Cue post ride selfie and we demolished the packed lunches, changed into some dry clothes and headed back for a well-earned cuppa tea. 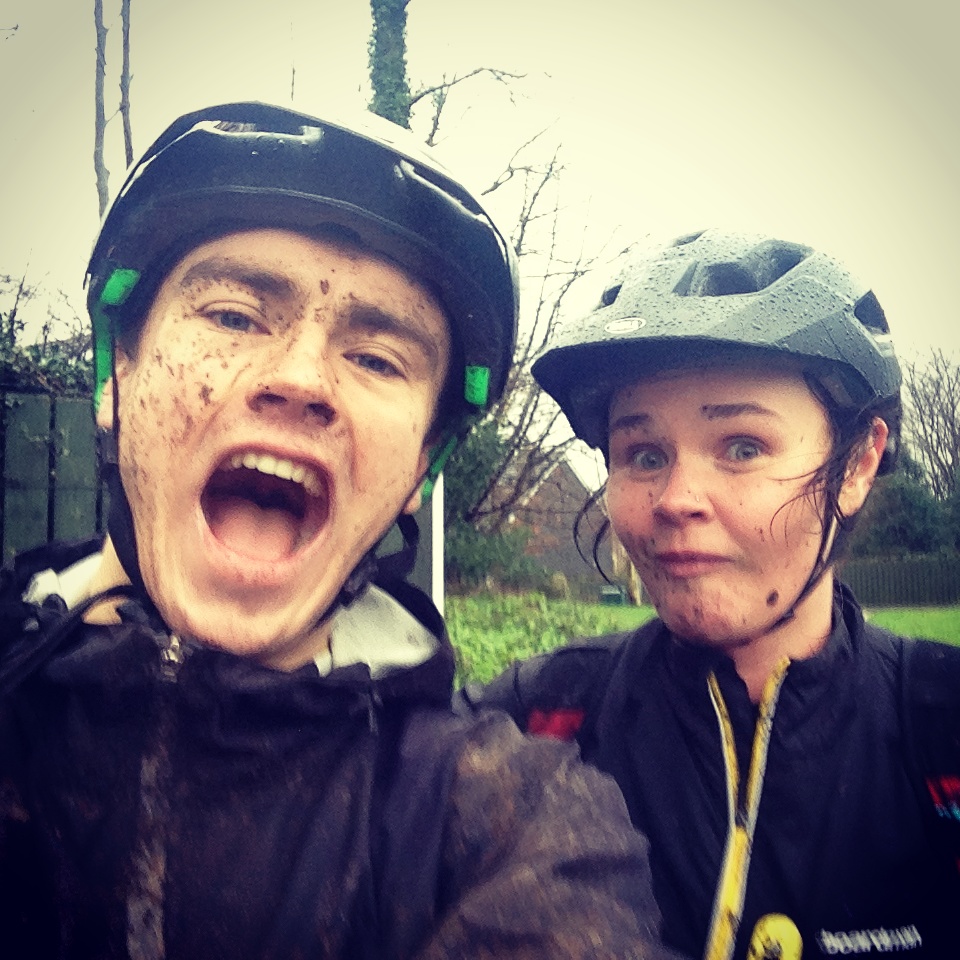 After a very early night, resting the quads, we started off at 8 am sharp again, this time heading over to Donard Wood, Newcastle…right by the sea.  I had the new toy & birthday present out, a Canon DSLR and I was excited to get some good action shots of our adventures.  I was keen to check out all the crashing waves and the sliver of sunlight fighting its way through the clouds, so a few touristy stops along the way were taken. 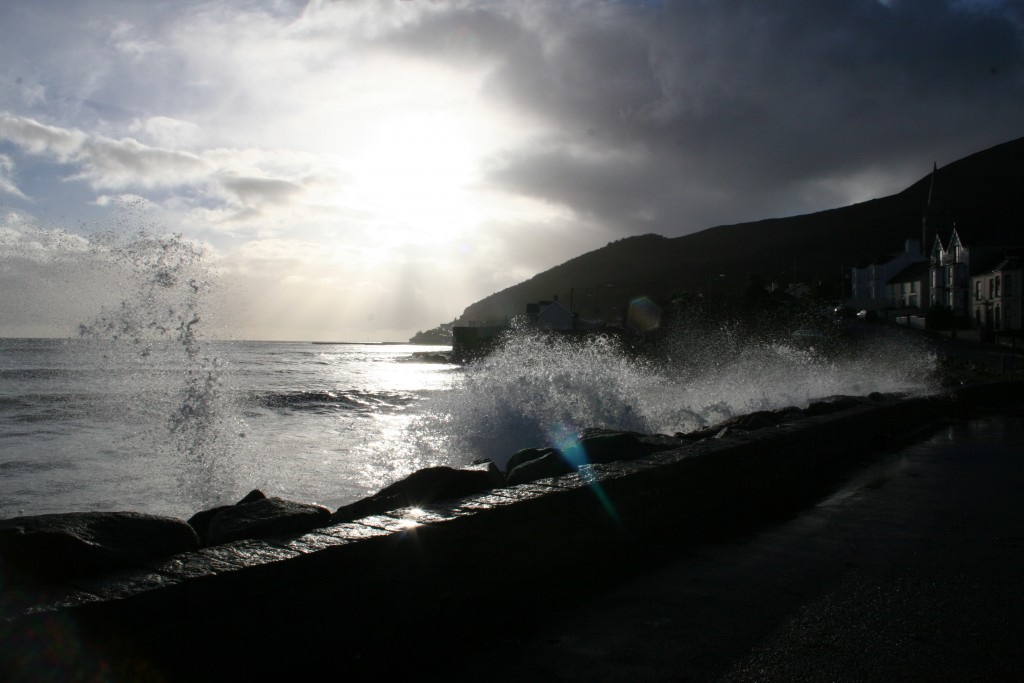 The waves playing up for the camera! Newcastle, Northern Ireland

Donard Wood is situated on the steep North East slopes of Northern Ireland’s highest mountain, Slieve Donard, and we enjoyed some epic views as we started the hefty fire road climb to the fast technical single track descents. They were so slidy with mud that we were nothing short of giddy at the bottom…leading to some serious sessioning and styling some drops. 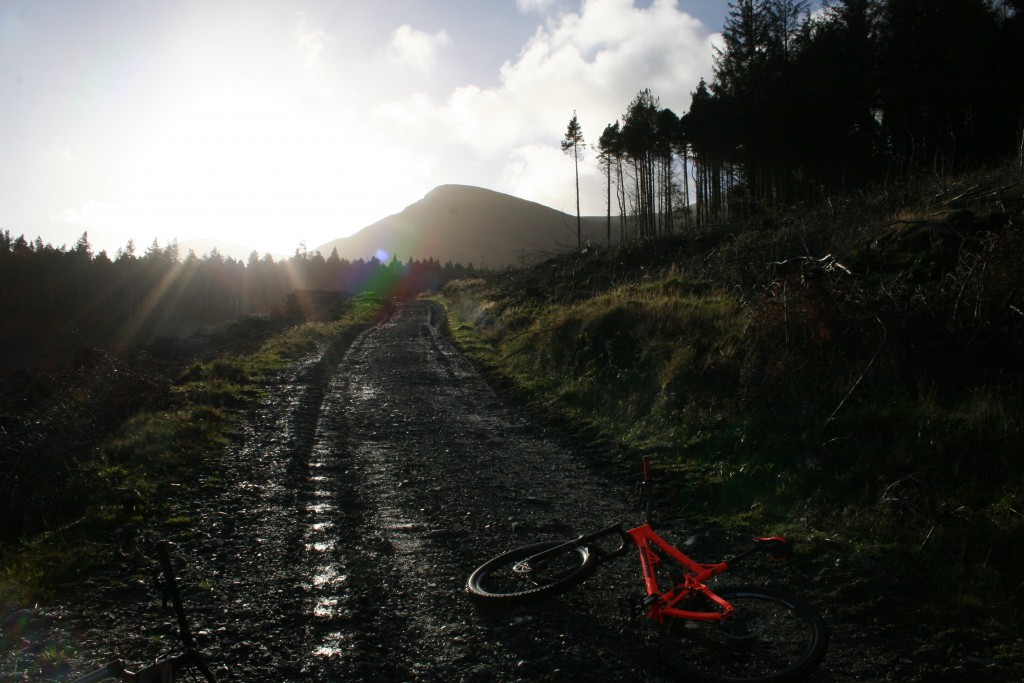 The first climb is the steepest. Donard Wood, Northern Ireland 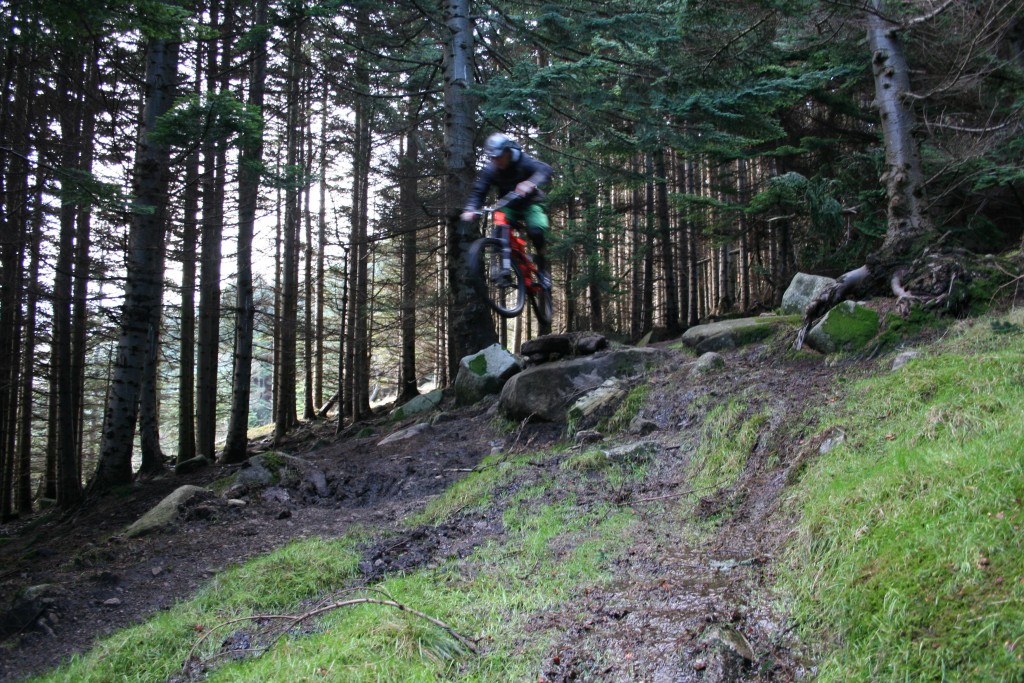 Donard Wood is also home to regular hikers following the Brandy Pad from Bloody Bridge, taking in sights such as Mourne Wall, the Castles, Slieve Commendagh and Slieve Donard.  I’d love to come back to so some of the hiking in the area, but as for now I was chomping for some fast technical descents! Donard became a fast favourite and had a real Enduro vibe. I was already wishing I had more time there, as the legs were beginning to wane already after another epic 4 hours of riding! 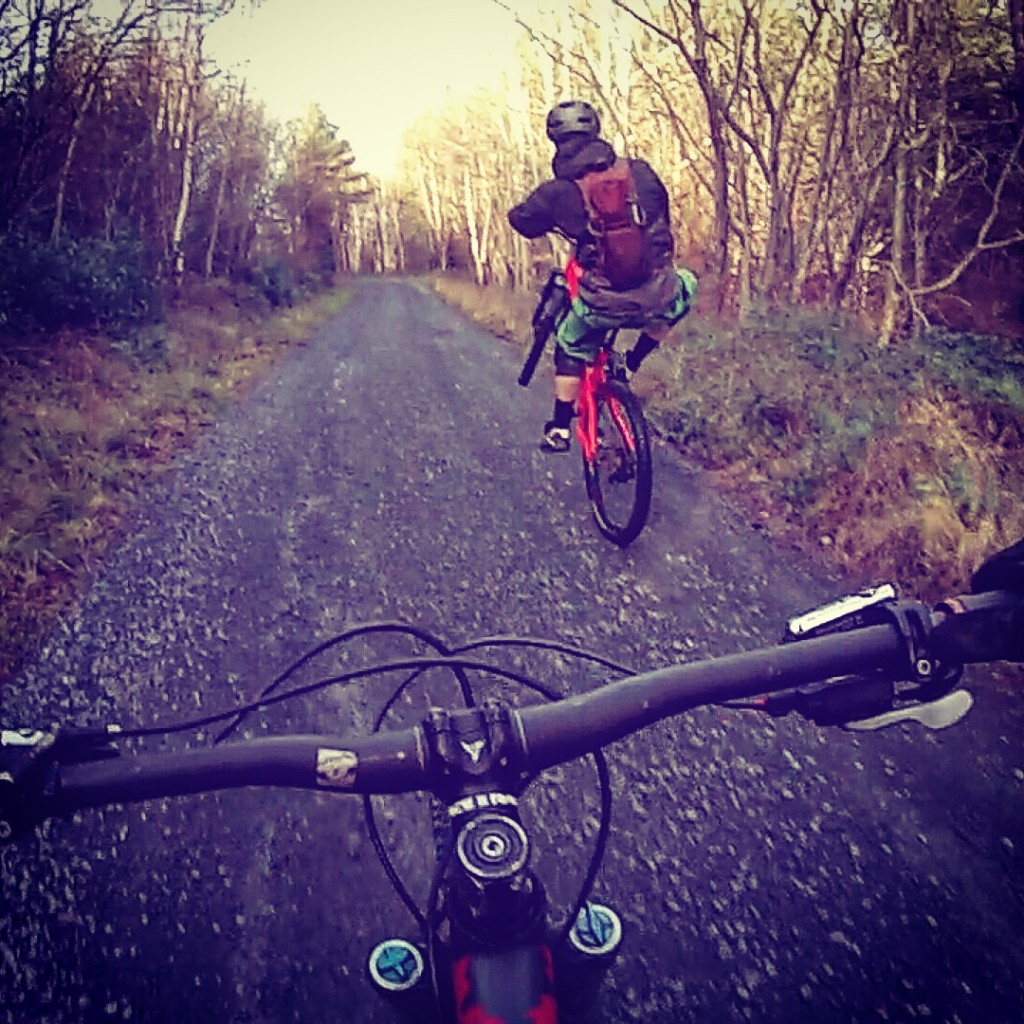 Saturday arrived and we got another cloudy but dry Tollymore group ride in with Gav’s brother Conor and his mates. The legs were definitely talking on this one and fatigue made for a gruelling climb, quickly dissipated as always by some fast runs and feeling a little more confident after Thursday’s practice. A short-lived one though as Gav somehow managed to land a little short on a gap jump and completely annihilated his chainring and crank on his wickedly vibrant Banshee Rune…check it out! 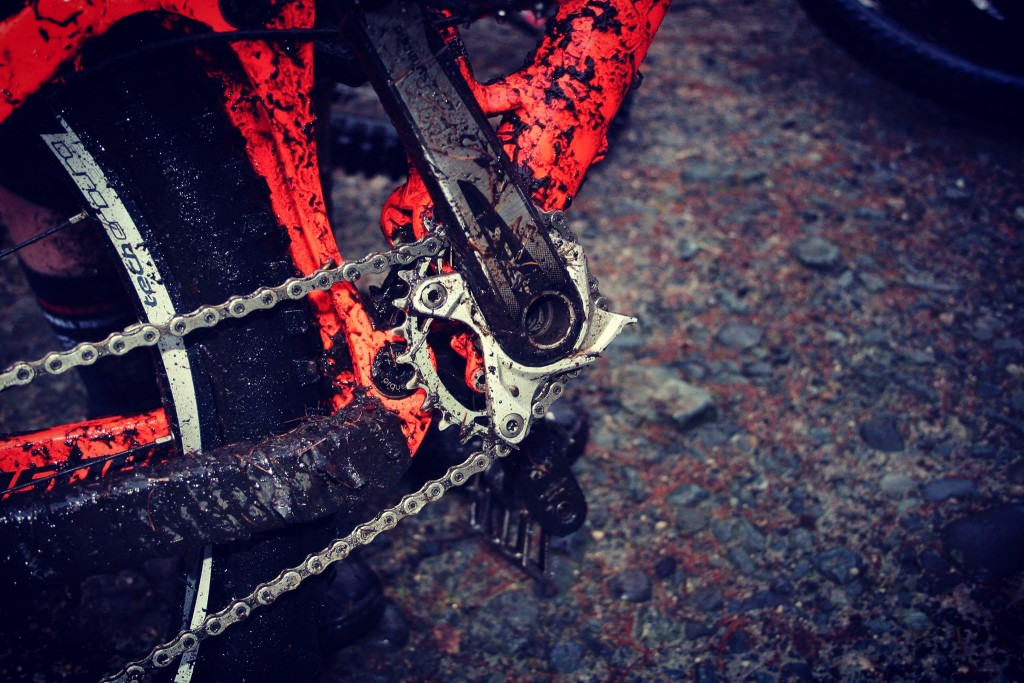 Time for another fry up and some more of those fresh eggs, plenty of bacon and a few warming cups of tea, I was feeling very spoiled at this point from Casa Marmion and ready for a little afternoon nap.

Uplift day: all about the downs!

The legs were already thanking me for some uplift action at Rostrevor DH, off the coast of Carlingford Lough.  I was keen to check out Ireland’s own mini Whistler showcasing a version of Whistler’s famous ‘Hecklers Rock’ half way down ‘On the Pulse’. We warmed up on ‘Kilbroney Steep’ a loose, rocky, steep descent with some small drops and a gap jump, perfectly executed by Gav, and definitely got the blood pumping,  It was awesome to session some downs and blow off some cobwebs on my cornering technique! 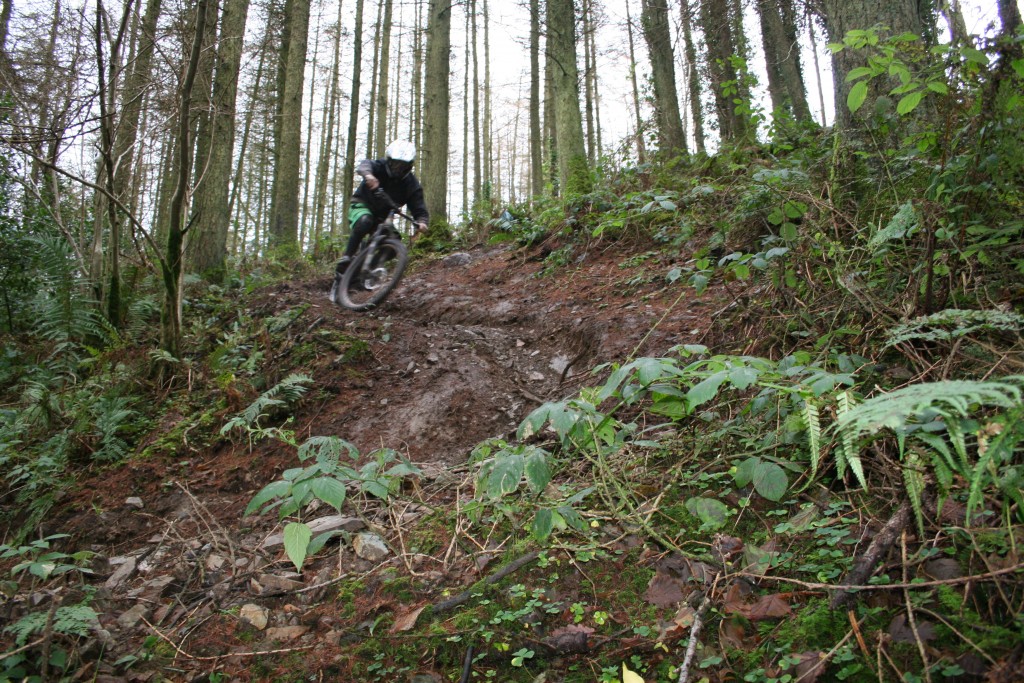 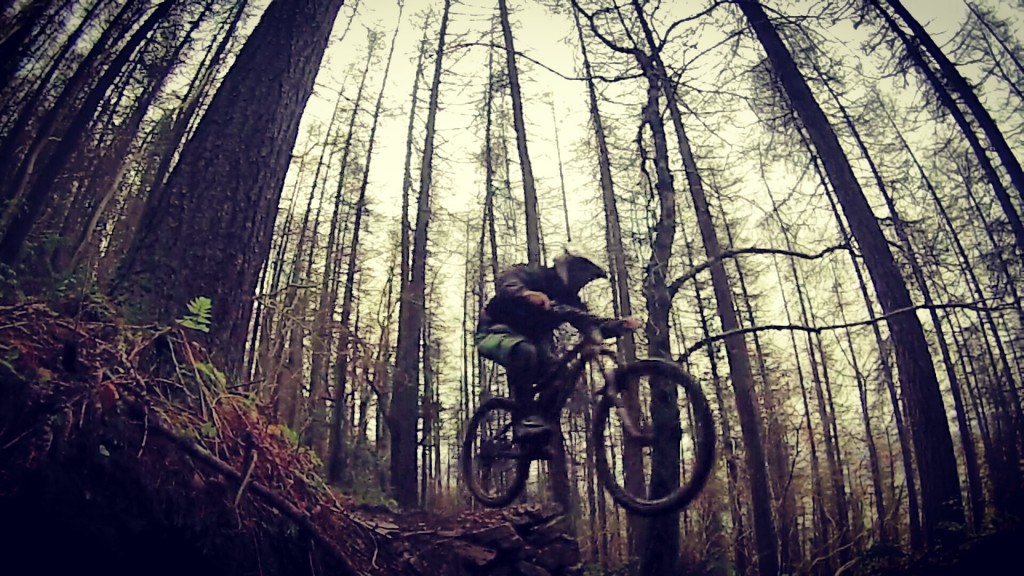 We then spent some time sessioning ‘Hecklers Rock’ and reminiscing about the Peak Leaders Bike Park Academy and Whistler, looking forward to going bigger and better this coming season.  One of our other fellow Peak Leaders graduates and buddy, Brad, is still living in Whistler and we all regularly chat about buying a van, synchronizing days off and getting to Squamish as much as we can! 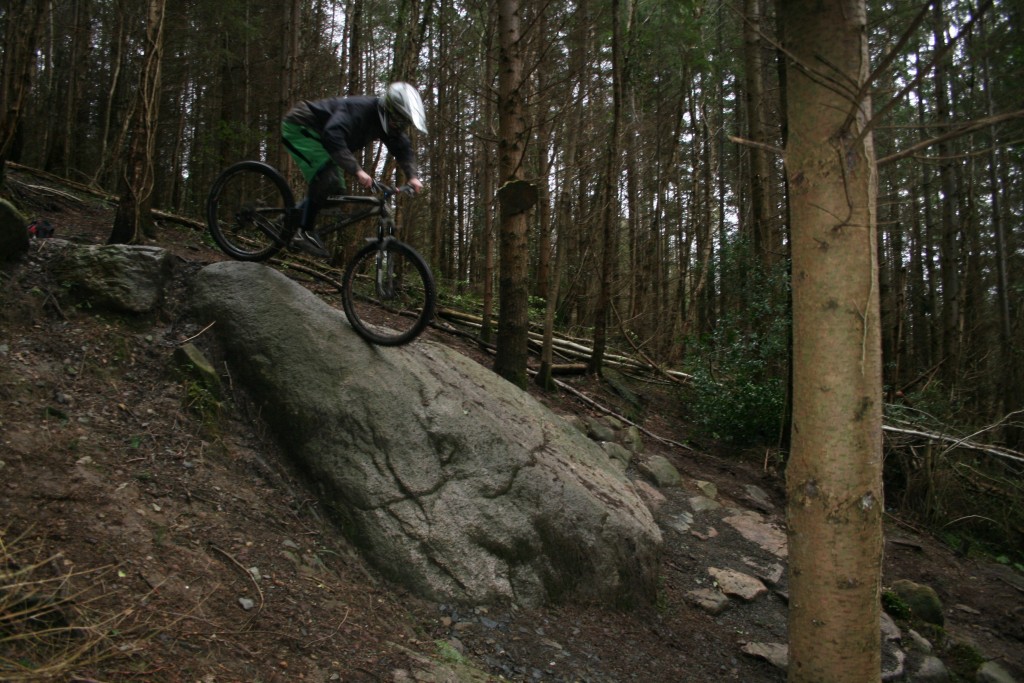 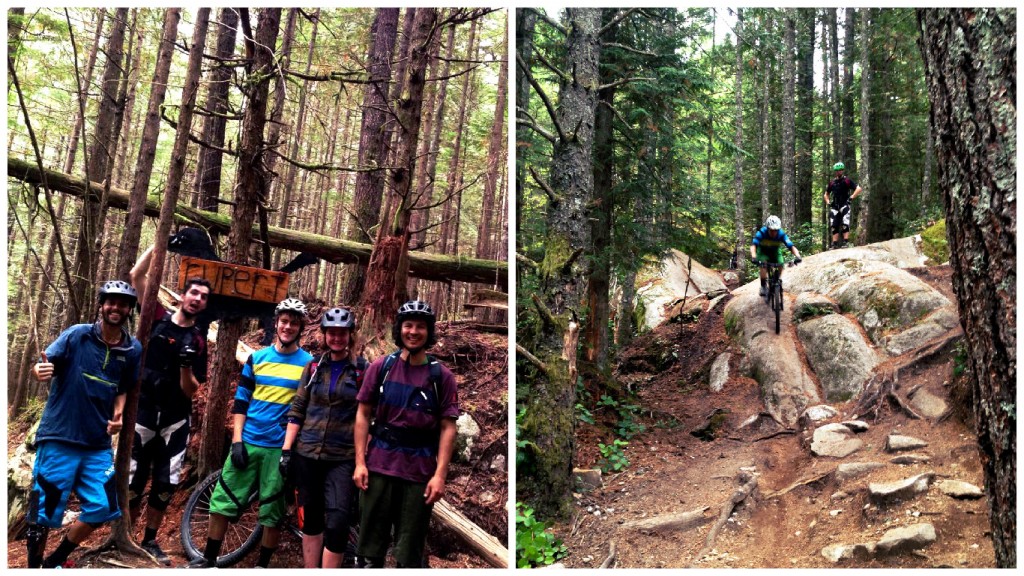 We managed 9 very muddy runs in Rostrevor and that was about as much as the legs could muster, a superb morning topped off with a cheeky post ride chipper and ice cream chaser :) An excellent way to finish an epic 4 days riding Northern Ireland’s finest with the best local knowledge! 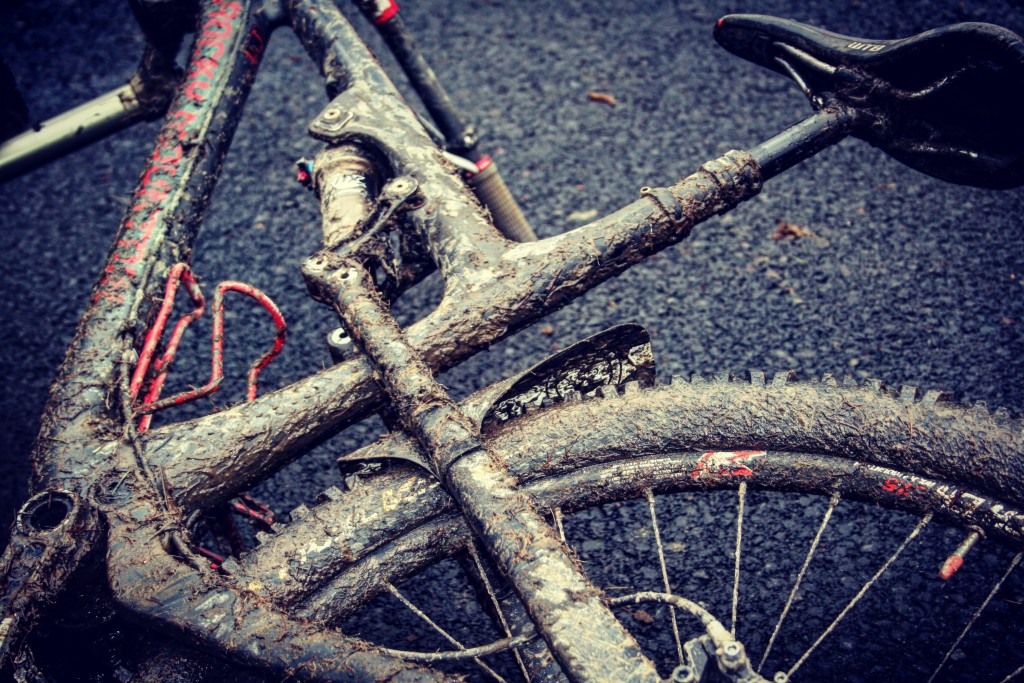 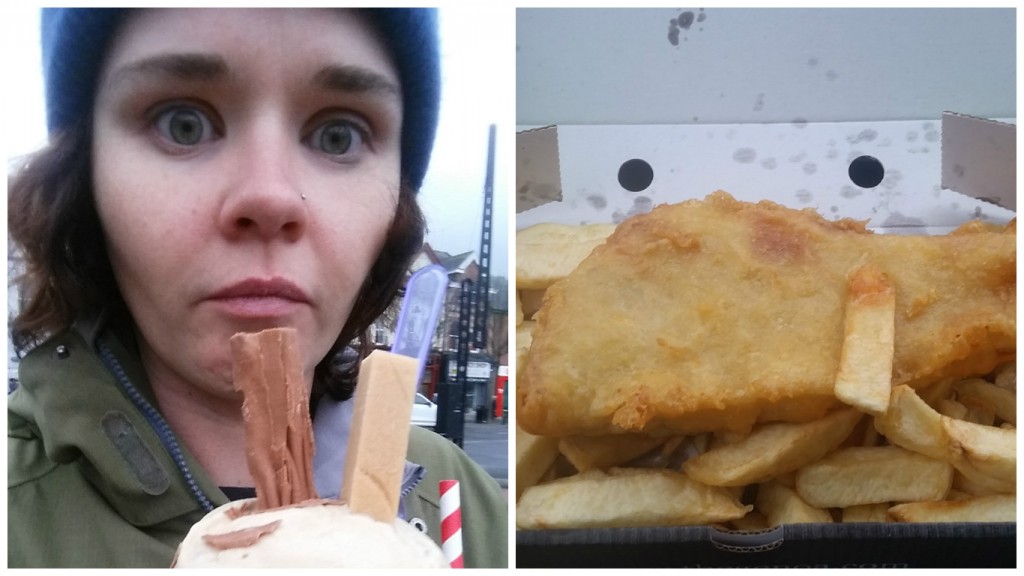 I still had one more day on my January jollies and didn’t want to leave without exploring the famous Giant’s Causeway!  Roughly 2 hours drive from Castlewellan, we decided to take the scenic coastal route and put the Canon DSLR through its paces.  It reminded me of the active rest days we used to have, exploring on foot the awesome sights Whistler had to offer, and the incredible hikes we did like the Sea to Sky Summit.

En route, we made our way through some charming coastal towns and stopped at a few castles. In my pursuit for more action shots, I managed to get completely soaked by a rogue wave at on point, much to Gavin’s amusement!   After a very windy, cloudy and rainy drive, the sun actually forced it’s way through on arrival at the Giant’s Causeway and I managed to get some nice snaps. 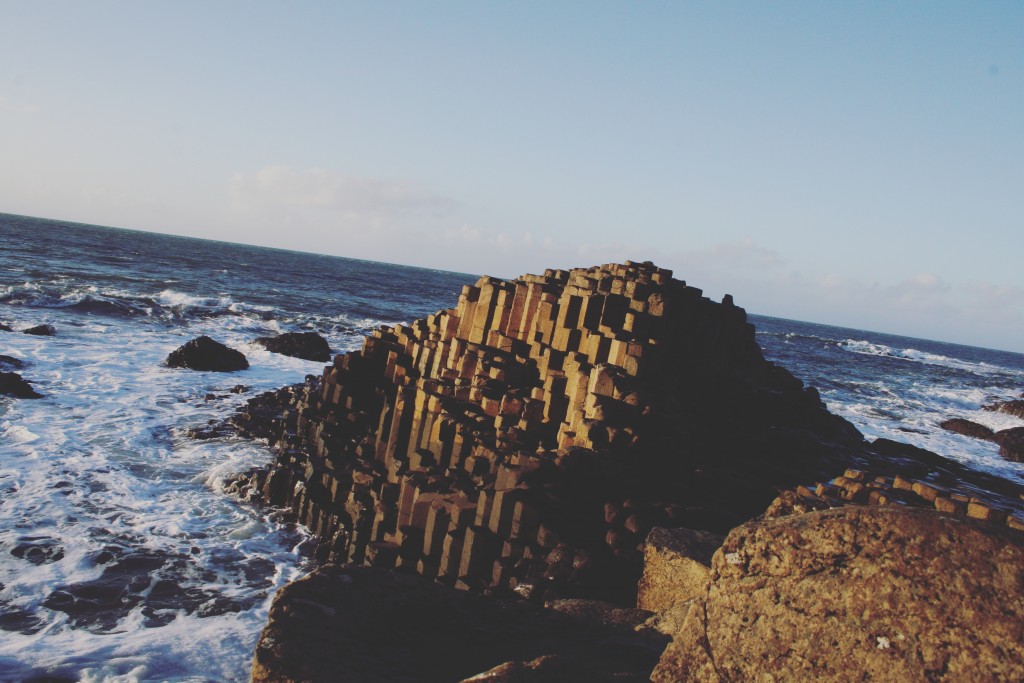 Before both of us head back to Whistler in May, we agreed that Gavin and his brother will visit Scotland in March so I can return the favour and showcase some of Aberdeenshire’s best trails. I have to give a huge thanks to Gav for running me around in the car for nearly a full week biking, and to his Mum and Dad for keeping me not just fed and watered, but most welcome in their home.

I was thinking throughout my visit, how the decision join the Peak Leaders Bike Park Academy gave me so much more than better cornering technique and some qualifications. I also found friends for life, a summer full of incredible moments and, of course, the opportunity to follow my dreams and start my journey on a new career path.