The Trainees have landed…

The team arrived last Sunday (except Jaqui who was so keen she turned up a day early) and quickly settled into the new chalet.

As usual it was a busy day and quite a few people arrived after dark – so their first proper glimpse of resort was going to be day one of training… But once everyone had finally arrived there was time for dinner, a quick chat and then early to bed to get ready for day one on the slopes with Jake.

We woke up to perfect conditions on Monday and although the massive storm that passed through was a few weeks ago now, the snow it left behind has formed the perfect base for the mountain.

Piste conditions are the best we can remember at this time of year – that’s Emma’s opinion and she should know, she’s been the Peak Leaders coach for eight seasons and in Verbier for 12 years…

So with great snow, perfect visibility and Instagram opportunities left, right and center Jake started to put the team through their paces.

Getting ready for the exams

There’s a lot to get your head around when you start training as a ski instructor and from day one Jake introduced the team to the fundamental concepts of skiing. It’s always a steep learning curve as trainees begin to understand what they need to do to meet criteria.

With the first hurdle for the trainees, the BASI Level One, just two weeks away they needed to hit the ground running. (So to speak).

Santa drops in on training

This time of year sees the formal opening of Verbier celebrated by the lift company who give free lift passes to anyone dressing as Santa – and this season they were after the world record for people dressed as Santa all in one place.

It was a frankly surreal experience practicing your short turns and being overtaken by a dozen out-of-control Father Christmases wearing stick-on beards. In total their were 1,200 Santas on the snow that day. A site we will struggle to foget…

Not to be outdone with all the fancy dress Ed and Fiona took to the slopes in their finest ski gear – which is, apparently, an absolutely amazing retro one-piece that looks straight out of a nineteen eighties photoshoot.

Needless to say they turned an awful lot of heads – mostly down to their cracking technique, naturally.

As usual, just when the team were getting used to the altitude it was time for the first fitness training session with Jake, who put them through their paces on the Parcour.

Unencumbered by his one piece it was Ed who showed the rest how things were done, getting crowned fitness slalom champion – a competition where the trainees have to weave in and out of posts, trying to cover the ground in the fastest possible time. Without cheating…

Another feature of Week one is the first aid course. This is vital skill in any walk-of-life, but on the mountain it takes on even more importance. That’s why it’s a requirement of all British Ski Instructors to hold a valid first aid qualification.

So the team learned everything from emergency procedure to CPR, and even how to tie bandages and make splints for serious injuries. So if you crash on the pistes of Verbier, these guys will be the perfect people to come to your rescue…

Going blonde for the season…

Finally Jens and Ed decided that this season they would start a new trend – with a lot of help from the girls. So armed with some hair dye they got started on their new look.

Now, the end result might or might not have been worth it. But the comedy value of watching them both sit in the chalet with cling film wrapped around their heads will make us laugh for years to come… 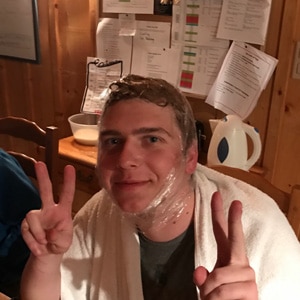 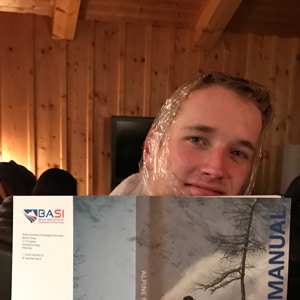 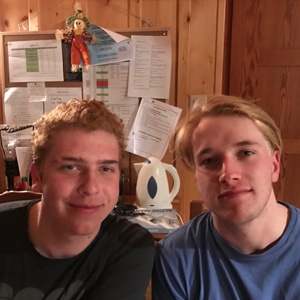