Monday was an awesome day for training up on the glacier – blue skies and epic hero snow. The perfect conditions for another week of training before their BASI Level 1 which is coming up fast.

Another game of Football at the start of the week was going well until Jake, our coach, tried to sprint after one too many a ball and managed to snap his achilles tendon! Unfortunately he needs to have an operation so no more skiing for him for a while. Let’s hope he has a speedy recovery! 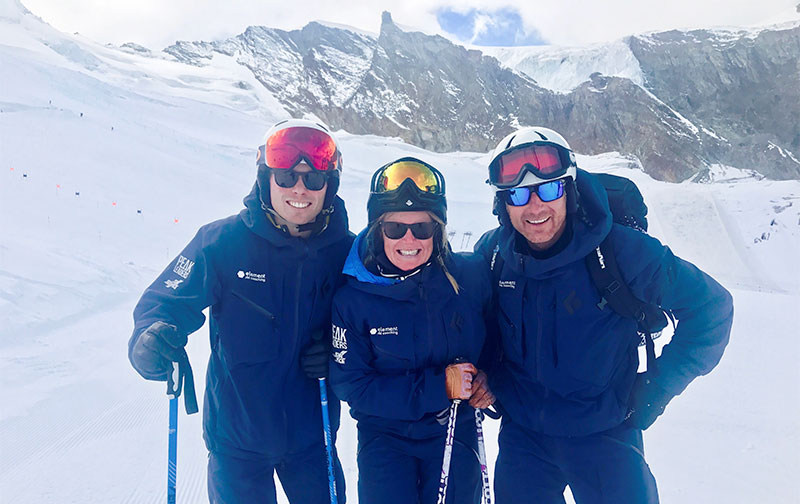 Jake’s replacement for the rest of this week was with Andy Freshwater who is an ex-Olympic racer and BASI trainer. So the Peak Leaders trainees had scored with an unlucky situation! Will Peek, another Element coach, arrived too, fresh from his season in New Zealand and ready to get back on skis. Will spent two seasons in Saas Fee so he knows exactly where to go.

Andy and his group managed to charm their way onto a special piste and went over to the Downhill World Cup run – it was epic and by far the best run of the course so far. Good timing!

Saas Fee has excellent facilities and loads of different teams head to the sports pitches to train in the afternoons after skiing. It is an extremely inspiring environment. Last week was about building an aerobic base and this week was more about starting to build strength. Andy and Emma set a circuit session comprising of sprints, bodyweight exercises, weights and boxing! Everyone enjoyed the boxing station!

Improving aerobic fitness (stamina) and strength are so important as this then allows the trainees to spend longer on the Mountain concentrating on the skills they need to work on for their exams. The Peak Leaders spend more time on the Mountain now, practicing skiing after the training sessions, so their fitness training is obviously paying off.

Now one more week of training before their first exam and journey to becoming a ski instructor!