In a recent assessment of the safety of different nations and their response to the pandemic, Switzerland has been rated as the top country.

In the study ranking 200 nations by their measures to control the virus and the underlying health care infrastructure the Swiss came top – and this is backed up by the fact that Swiss cases have ben reduced hugely in recent months, despite being one of the first countries to open bars, restaurants and non-essential shops.

No wonder the government have approved ski lifts opening and (as you can imagine) they have a clear and sensible policy on how to keep everyone safe.

It’s certainly a big claim and one that might seem difficult to prove.

Essentially they created a score for each nation.

This factors in the country’s measures put in place to control the virus, the number of cases and deaths as well as how prepared the nation is for an increase in cases – so health infrastructure has a big role to play.

Another big factor is the economic stability of the country and its ability to withstand the global economic impact, but also its capacity to introduce fiscal measures to protect the national economy.

The result was a 250 page report that used 500 data sources that included the World Health Organization (WHO), Johns Hopkins University, Worldometers and the United States’ Centers for Disease Control and Prevention (CDC).

HOW DID THE COUNTRIES RANK?

Switzerland sits in first place with a score of 752, while Germany is in second place with 749 points.

The nations have been placed in a four tiered system, with the top tier made up of the best rated 20 nations.

Of course it’s not a definitive safety list – after all some nations have no current cases of Covid-19 – it’s a broader assessment of how each country is coping and how prepared they are.

The score is intended to show how well the country has initially reacted, how well they would cope with an increase of cases and how resilient the country is to bounce back after the pandemic has been suppressed or (hopefully) after the virus has been eradicated.

And based on those criteria Switzerland is in a very good place.

IS SWITZERLAND REALLY THAT SAFE?

Currently cases have fallen to only a few dozen new cases per day – and that’s across a country of over 8 million people.

It’s also significant that back on May 11th the Swiss began to open up ‘non-essential’ businesses, restaurants and bars again. Since then – due to everyone following the rules and businesses adhering to government guidelines – cases have really not gone up much. There has been a small uplift in urban areas but in the context of the initial spike it has been negligible.

They were also one of the first nations to get a track-and-trace app up and running, whilst the clarity of messaging has been excellent.

So now the lifts have opened up again in ski resorts and people are asked to wear masks and wash their hands regularly. But it’s looking like the Swiss are on the right road to operating as normally as possible whilst helping businesses get back on their feet.

And, of course, if there were to be an increase of cases, the Swiss health system is well prepared to deal with it.

This has been a fast moving situation all over the world. But these charts give a really useful snapshot of what’s actually happening here.

Cases in the last 24 hours, for example, are up 129 across the entire country (population 8.5 million).

There have been just six new hospitalisations and thankfully nobody died of Covid-19.

In a terrible crisis the Swiss really have kept control of what at first seemed an almost uncontrollable situation. And they seem ready to move out of the pandemic safely and sensibly.

We are really encouraged and as a result we are expecting all our Swiss courses to run as usual whilst following the guidelines.

Meanwhile you can read more about the Covid-19 safety ranking system here on thelocal.ch and here on swissinfo.ch. 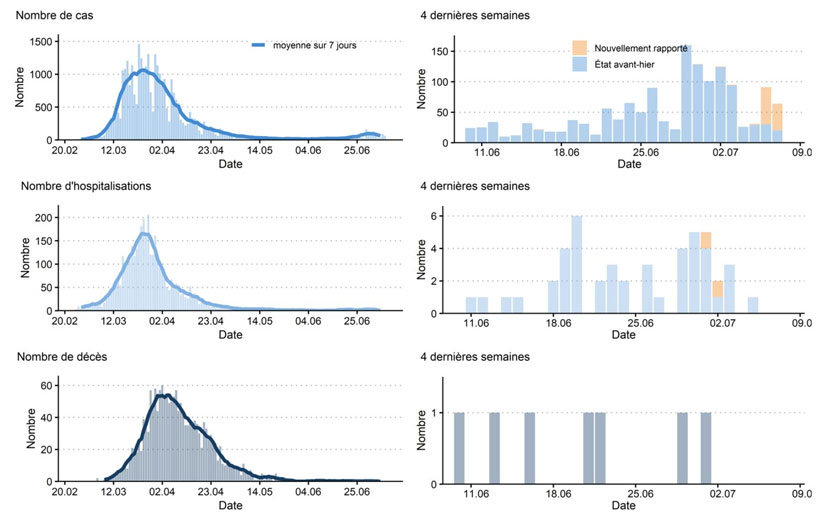